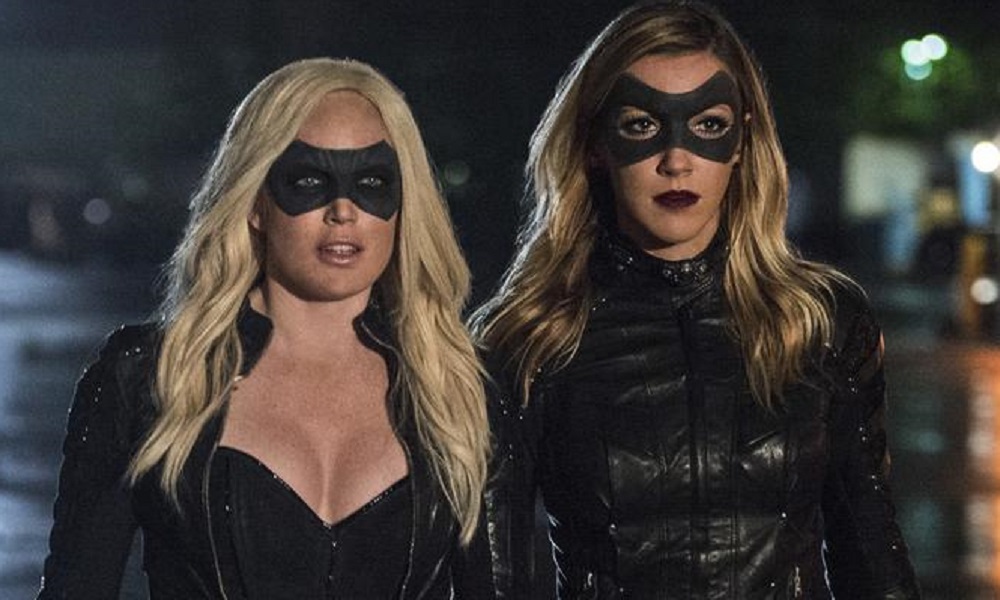 At the end of last week’s episode Felicity was able to decode a message from Ray Palmer which revealed that the tech mogul, believed killed in an explosion in his laboratory, was actually still alive. With the aid of Curtis Holt, Felicity is able to communicate with Ray, finding out that his miniaturization technology worked too well and shrunk him down to the size of a pea. Even worse, Ray is being held prisoner by Damian Darhk who wants Ray to turn over his technology to him.

In order to free Ray they have to return him to normal size but to do so, they will need to steal a high tech component from Palmer Technologies chief rival, Kord Industries. Yes as in Ted Kord the man better known as The Blue Beetle. Oliver leads the group, including Sara, who resumes her guise as Black Canary, in a break-in at Kord’s facility. While they successfully obtain the item they need Sara nearly kills a security guard, apparently suffering from the same blood lust as Thea, brought on by her immersion in the Lazarus Pit.

Curtis has to build a special tool while on mission with the team to rescue Ray, putting him into the thick of action for the first time and perhaps foreshadowing his eventual turn into Mr. Terrific. Green Arrow allows himself to be captured by Darhk in order to infiltrate the villain’s stronghold. Ray is returned to normal size and the team makes their escape, but not before Sara kills one of Darhk’s men.

This was a fairly straight-forward episode with essentially one goal in mind which was rescuing Palmer. There were a few side diversions thrown in such as a bit of relationship angst between Oliver and Felicity and a surprise visit by Hillary’s frenetic mother which serves to complicate things. But by and large this episode was tight and focused. While it stretched the borders of logic that Kord industries would leave an item that they held multiple patents on lying right on a shelf, I would guess that the great idea was to establish Kord as a major rival and player in Star City. Hard to say…original plans had Kord and Beetle being part of Season 3 but DC had other plans so that was scrapped in favor of Ray Palmer. We will have to keep an eye on this one.

Sara’s control issues cause her to make a decision to leave town at the end of the episode. It will be interesting to see if these issues will plague her once she joins Legends of Tomorrow or if they will be ongoing. The island flashbacks have been a little bit flat this year but last night’s piggybacked off the appearance by John Constantine last week. The orb that Oliver recovered for Reiter leads to a ruin and some sort of ancient gift that the mercenary leader is seeking.

Ray Palmer does not want to return to his company just yet, keeping it in Felicity’s hands. Again with his being a part of Legends of Tomorrow we can assume he’ll not be as prominent in the show as he has been. Probably a good thing because with Thea now as Speedy/The Red Arrow, Diggle wearing a semi-costume, Curtis Holt in the fold, the show is getting a little crowded.