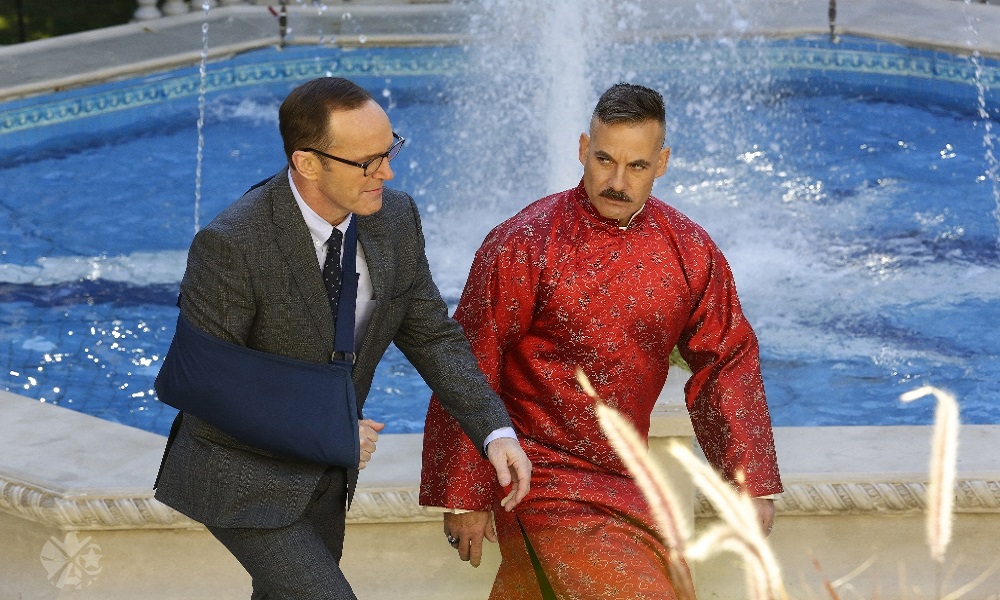 This week’s episode of Agents of S.H.I.E.L.D. combined exciting superhero action with spy thriller intrigue to make for an exceptional outing. As we learned last week, General Talbot (Adrian Pasdar) was named as the new head of the ATCU by the President but reports to Phil Coulson who will continue to operate S.H.I.E.L.D. from the shadows. To say that neither man is happy with the org chart would be an understatement. They get off on the wrong foot immediately when the team as a run-in with Crusher Creel aka The Absorbing Man who turns out to be working as Talbot’s bodyguard.

Coulson, in the guise of a CDC doctor and Talbot are sent to a meeting with representatives of several nations to discuss the threat of the Inhumans. Knowing that Gideon Malick will likely have an inside person at the meeting the plan to use the opportunity to allow Bobbi, May, and Hunter to infiltrate the complex to uncover the mole and hopefully lead them to Malick. Bobbi discovers that the Australian government are holding an Inhuman by the name if “Eden Fesi” for experimentation. In the comics Fesi is the Inhuman known as “Manifold”. Malick again proves that he is one step ahead of Coulson with a shocking twist.

Back at S.H.I.E.L.D. HQ Simmons’ experiment on Daisy’s and Creel’s blood samples reveals that Creel’s blood can prevent the Terrigen from turning a person into an Inhuman, acting as a vaccination. This leads to a conflict between Lincoln and Daisy who differ on whether it should be used for this purpose. S.H.I.E.L.D. is taking a big move into mutant territory here. The themes of fear of the inhumans, and imprisoning them and keeping them herded in a central location are the same that played out in the various X-Men comics over the years. So even though Disney cannot use the X-Men or mutants in the Marvel Cinematic Universe, they are basically, for all intents and purposes, using X-men and mutants in the Marvel Cinematic Universe.

Elsewhere, the alien Inhuman parasite known as Hive who inhabits Ward’s body, continues to grow stronger and a whole lot more frightening. Even Malick treads lightly around the creepy alien. But things get much worse when Hive demands five fresh humans on which to feed. Even fellow Inhumans Lucio and Giyera are noticeably shaken by what Hive does to the specimens.

There were a number of important developments this week…The discovery of a new Inhuman; seeing Hive use his terrifying powers for the first time; and the return of Crusher Creel were all big. But the biggest new plot had to be that Creel’s blood could be used to create a vaccination to prevent the birth of new Inhumans. This would certainly be a way of limiting the number of super-powered individuals within the confines of the show and make them more manageable. It also sets up potential backlash regarding the use of such a drug. I’m glad things turned out with Talbot the way they did. The guy may be a complete jerk but you can’t question is loyalty.