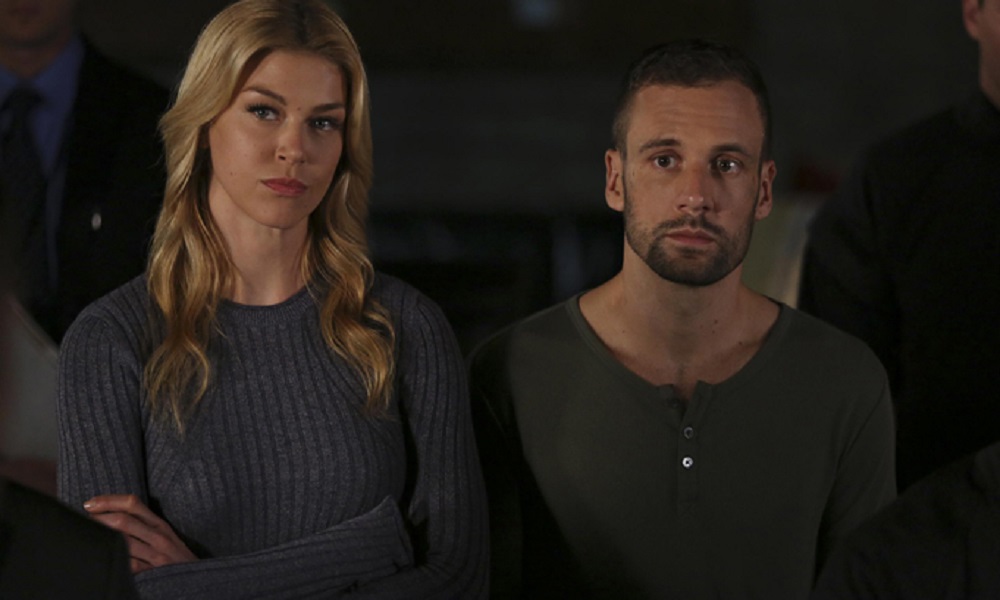 Wow! That was…wow! I have lamented in recent reviews of Agents of S.H.I.E.L.D. that the battle vs. Hydra is beginning to drag and that they needed to start forwarding things a bit faster. Done and done! Last night’s episode was like a freight train of revelations which tied a surprisingly large number of plot ends together.

Andrew Garner has been taken to ATCU facility to be put in stasis until he can be cured of…being an Inhuman. Coulson is still not sure that Rosalind is to be trusted and sends in Bobbi and Hunter in disguised as an FBI cyber security team. Meanwhile he hosts Ros in a tour of S.H.I.E.L.D.’s secret facility. Well of course we know that Ros was communicating with Hydra leader Gideon Malick at the end of last week’s episode. In a bit of a test/cat and mouse game, Malick attempts to have Ward killed but the former S.H.I.E.L.D. Agent easily dispatches the would-be assassins and interrogates them to find Malick’s current whereabouts. More on that in a minute…

Bobbi and Hunter discover that not only is Garner not at the ATCU facility but the group has been attempting to create an army of Inhumans. Coulson threatens to leave Ros locked in a containment cell when he discovers her treachery. However Rosalind was duped by Malick. She was unaware of his plans and unaware that Hydra has stolen Garner from under their noses.

Malick relates the entire history of Hydra which dates back thousands of years before the Red Skull. He has a piece of the monolith which was used to banish a powerful Inhuman, the first Inhuman on Earth, through the portal ages ago to the same planet where Simmons was trapped. Hydra has been trying to find a way to bring the alien back for over 1000 years and now they know that Fitz has found a way to accomplish that seemingly impossible feat.

Since ABC/Disney cannot use actual mutants it is clearer than ever that Inhumans will be taking their place in their cinematic/TV universe. The fact that Hydra has stores of terrigen infused fish oil tablets can make for an endless supply of heroes and villains. More than ever I am puzzled but excited to learn how all of this will eventually be tied into the Inhumans film. There has been no mention of Black Bolt or the rest of the Inhuman’s royal family which would indicate that not even Hydra knows of their existence. We just assume that the alien creature on the planet that harassed Simmons and Will Daniels us the same Inhuman who was banished. I wonder if they might be revealed as one of the more well known Inhumans.

It was priceless to see the look on Rosalind’s face when she realized she had been used by Malick. He is the true Hydra villain that the series and the films need in the modern age. Powers Boothe is so deliciously sinister and now he has an equally sinister and sadistic henchman in Grant Ward. Loved to see Bobbi get to do a bit more and also show offer her new magnetized batons that return to her like boomerangs when thrown.