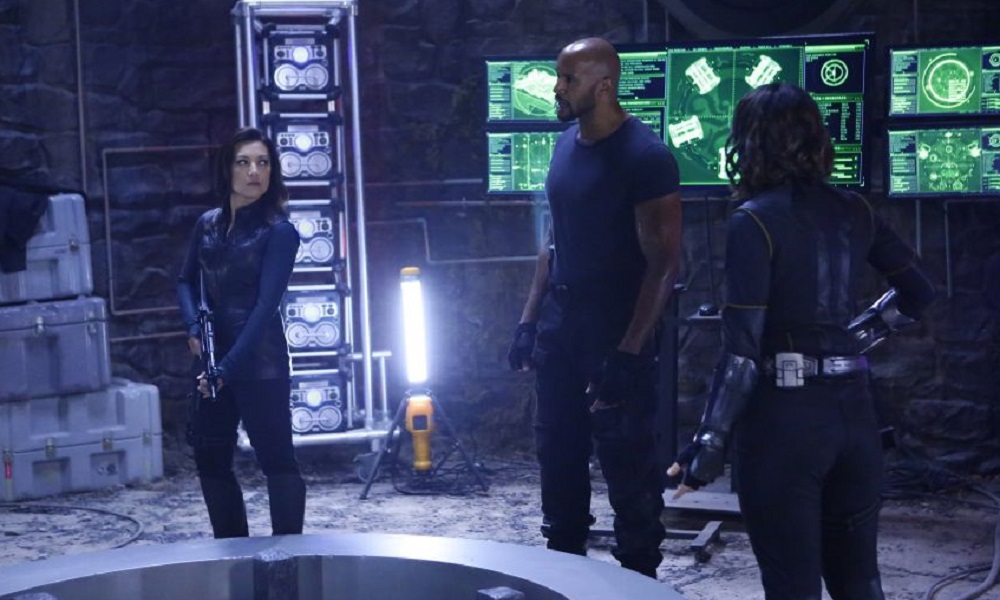 For those of you who wanted to see Ward get killed and for those who wanted to see him survive it was the best of both worlds. No matter which side of the fence you were on last night’s mid-season finale of Agents of S.H.I.E.L.D. was filled with meaty goodness.

Ward, Fitz, and a team of Hydra agents arrive through the portal and onto the alien world in search of the Inhuman God. Unknown to them Coulson made it through the portal as well and is hot on their trail. Fitz leads them to stranded astronaut Will Daniels to seek his aid in locating the alien and getting back though the portal. Mack, now the acting S.H.I.E.L.D. Director, sets up a two-pronged attack on the Hydra Castle. The Secret Warrior team of Daisy, Lincoln, and Gutierrez are sent to rescue Simmons while Mack, Bobbi, May, and Hunter infiltrate the castle to secure the portal room.

Simmons manages to escape and hides in a room containing the captured Inhumans that Malick (Powers Boothe) intends to use as an army for the alien Inhuman. She finds Andrew Garner aka Lash and frees him. Lash goes on a rampage killing the Hydra agents as well as the other captured Inhumans.

On the alien world, Fitz and Daniels over power a couple of Hydra agents and run off. Daniels leads them to a valley where we see a ruined alien city. Daniels explains that the world once had 9 such cities but they eventually were destroyed fighting each other. Daniels then reveals that he is in fact the Inhuman and that the real Daniels is dead. Fitz shoots him several times and destroys his body with a flare gun. From his charred body we see a worm like creature slither away. Meanwhile Ward and Coulson fight with War getting the upper hand. Just when we think Coulson plans to leave Ward stranded, he uses his robotic arm to crush his chest, killing him. But later on Earth, Malick locates Ward who is now inhabited by the Inhuman.

So yes…Ward is dead but his body lives on, inhabited by the Inhuman who is apparently capable of using bodies in a symbiotic way and even reanimate dead bodies. Smart move by the writers…It keeps Ward in the mix as a central villain and yet those who wanted to see Grant Ward pay for all of his actions got their wish. But who exactly is this alien? Well, it’s safe to say it’s not Black Bolt nor any other of the Royal Inhuman family.

In fact now that we have seen its ability to take over bodies my money is on either a totally new Inhuman OR The Unspoken. The Unspoken is Black Bolt’s cousin who was the King of the Inhumans until overthrown by Black Bolt. He has the power to alter his body into any form and while that is slightly different than the alien in the show it is no dissimilar and could be a plot angle that leads into the Inhumans movie.

While there was a lot to like the one thing I didn’t was Lash. There was plenty enough going on this week without adding him into the mix and it didn’t fit well. That was the only misstep this week. Coulson was as determined as we’ve ever seen. Even Fitz was shocked by his killing of Ward. It was also a highlight to see the Secret Warriors in their first action (with Mack referring to them as Power Rangers no less). But now is where Agents of S.H.I.E.L.D. seriously screws itself…again. The series goes on a three month hiatus until March while we get another Agent Carter mini-series. This kills the show’s momentum when it ended its half season on a high note.