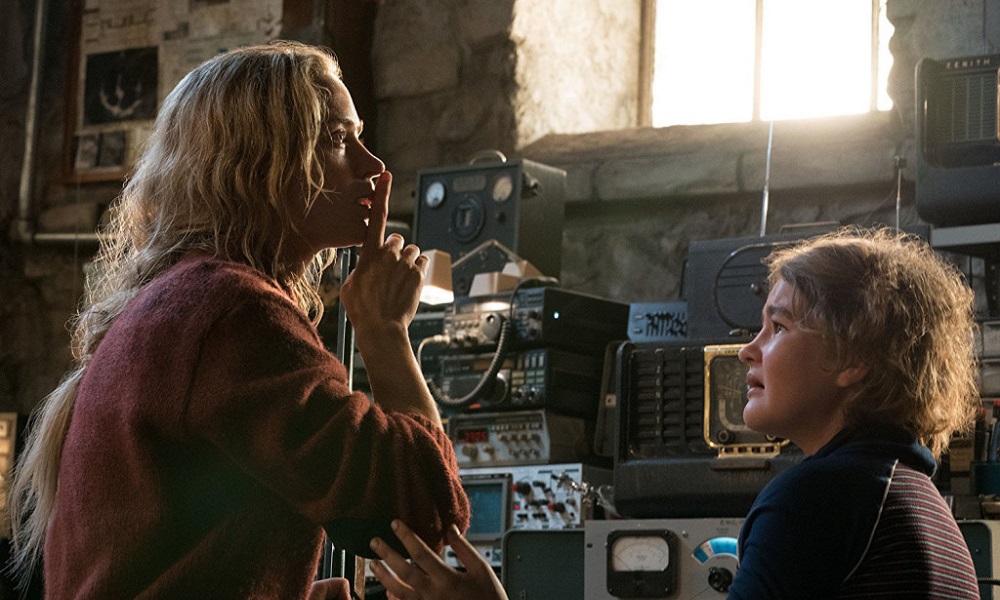 SOUND BITES: A REVIEW OF A QUIET PLACE (2018) SANS SPOILERS

A Quiet Place (2018) features a very near future in which seemingly invulnerable monsters have overrun the Earth.  The creatures are sightless but have extremely sensitive hearing, and—as the tagline explains—if “[t]hey hear you, they hunt you.”  This original premise provides a welcome alternative to the done-to-undeath zombie pandemic version of post-apocalyptic survival horror.  And it automatically generates an almost unbearable chronic dread because any significant sound can bring swift and certain slaughter by “dark angels” of death.

A stock suspense scene in movies is that of a character hiding from a stalker, trying to not make a sound.  A Quiet Place extends this to 90 minutes and draws the audience into its aurally claustrophobic setting because its lack of sound multiplies the level of quietude required by theater manners.  And by forcing the audience to participate in the situation, the movie forces forces them also to empathize with the movie’s protagonists, a young family fending for themselves on a farm like Doomsday Preppers subjects living in an Edward Hopper painting. 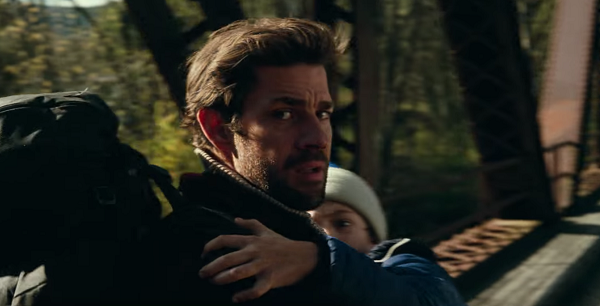 The Abbott family walks barefoot on floors with painted footprints and trails made of poured sand.  They eat without tableware, play board games with felt cutouts and fuzzy balls as pieces, and listen to music with earpieces.  They communicate via the American Sign Language required for the deaf daughter.  And the father tries to communicate with the outside world and figure out the monsters’ weakness in the soundproofed basement featuring a ham radio, televisions, dry-erase boards, and clipped newspaper articles about the infestation.

His work area provides exposition (in a lazy, awkward way).  From the headlines, scribblings, and images the audience can glean that the creatures are “blind,” “attack sound,” have armor “impenetrable” to “bullets” and “bombs,” and have defeated the U.S. military (which recommends going “underground”) and infested the entire world.  One of the clipped newspaper articles is about a meteor landing in New Mexico, implying that’s how the creatures arrived.  But their origin isn’t important to the story and the mystery heightens the horror.

That’s why the monsters are shown only as much as necessary.  Until the movie’s final section, the audience is allowed only shell-shocking, borderline-subliminal glimpses of large, otherworldly sets of appendages moving with lightning speed.  And in the climax they’re given murky views of an insectoid with forelimbs that can tear metal and an armored head that opens like a flower to reveal dagger-teeth and repulsive, pulsating ears.  The movie’s creatures and brutal intensity make the only slightly gory A Quiet Place seem rated R instead of PG-13.

In fact, A Quiet Place feels like an M. Night Shyamalan horror film (such as Signs (2002), The Village (2004), and Split (2016)) and, for the most part, has the same strengths and weaknesses.  It maintains a suffocating atmosphere of apprehension even when no threats are present, teases and frustrates with its rather low payoff-to-buildup ratio, has a premise that’s both original and derivative, and is a subtle allegory.  Couldn’t A Quiet Place be seen as a gross exaggeration of living in a totalitarian state, crushed by extreme censorship and a low standard of living?

And the story is about—above all else—the challenges of and sacrifices required by parenting.  That the Abbott couple has children is what moves the plot forward; and their being played by a real-life married couple with two children, Emily Blunt and director John Krasinski, bolsters the movie’s verisimilitude.  So does the deaf daughter’s being played by a deaf actress, Millicent Simmonds.  But even so, A Quiet Place has an emotional core that isn’t quite as strong as it should be and is just fairly good instead of as good as its critical and commercial success indicate.