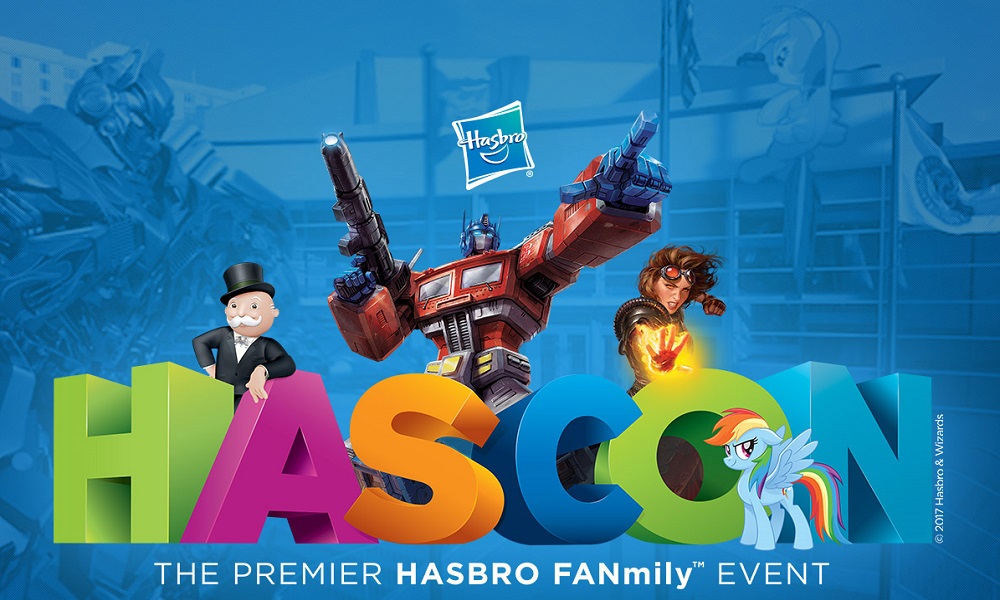 Hasbro, Inc., a global play and entertainment company, officially opened ticket sales for the first-ever HASCON FANmily event, which will take place in Providence at the Rhode Island Convention Center and Dunkin’ Donuts Center from September 8-10, 2017. Hasbro fans and families from around the globe can purchase single day tickets or three-day tickets for the convention, with VIP packages available for super-fans and the most enthusiastic collectors.

Hasbro also revealed the first round of talent appearances, panels and brand experiences set to take place during HASCON 2017. Appearances and meet & greets will be available with some of the biggest names from Hasbro, including DUDE PERFECT, Lorenzo Di Bonaventura (Producer of all the TRANSFORMERS films, as well as G.I. JOE: The Rise of Cobra and G.I. JOE: Retaliation); Stan Lee (Marvel Comics Legend); Peter Cullen and Frank Welker (original TRANSFORMERS voice talent); Andrea Libman and Cathy Weseluck (voice talent of MY LITTLE PONY: FRIENDSHIP IS MAGIC and MY LITTLE PONY: THE MOVIE), “Chewbacca Mom”, Candace Payne and more.

This unique event will bring Hasbro’s most iconic brands to life like never before, including TRANSFORMERS, MY LITTLE PONY, NERF, MAGIC: THE GATHERING, PLAY-DOH, MONOPOLY and G.I. JOE, and exceptional partner brands such as BEYBLADE, DREAMWORKS TROLLS and SESAME STREET. Fans will get a peek behind the Hasbro curtain during the three days filled with exciting first-look previews and panels from Hasbro’s biggest television and movie series.

Attendees will be immersed in hands-on, interactive experiences with oversized games such as PIE FACE and TOILET TROUBLE from HASBRO GAMING, photo opportunities with SESAME STREET and TROLLS costumed characters, epic BEYBLADE battles, a PLAY-DOH creation zone and the MY LITTLE PONY magical world of Equestria. FANmilies will be able to take photos with props from Hasbro’s movies and step into a custom-built NERF battle arena, maybe even with the guys from DUDE PERFECT. HASCON will also host MAGIC: THE GATHERING gameplay featuring an exclusive preview of the upcoming Iconic Masters card set. Youth fans, ages 3-15, have the opportunity to audition for Hasbro commercials and voice talent on our animated series. Fans also can purchase exclusive* Hasbro toys and merchandise including new TRANSFORMERS products.

In addition, there will be activities inspired by several iconic Disney properties, including Disney Princess, Frozen, Elena of Avalor, Moana and Descendants 2, as well as Star Wars and Marvel’s Avengers, Spider-Man and Guardians of the Galaxy. From movie props and costumes on display, to hands-on fun through art tutorials and more, these areas will be can’t-miss destinations during the show.

“Hasbro constantly strives for new ways to bring our storytelling to life and offer fans greater access to our brands, and HASCON is designed to bring attendees closer to Hasbro’s biggest properties than ever before,” said John Frascotti, President of Hasbro. “We are assembling the ultimate fan celebration, with three days of marquee talent, interactive activities, immersive experiences, game events, panel discussions, VIP events and much more. We’re set to deliver an unforgettable experience for fans and families alike.”