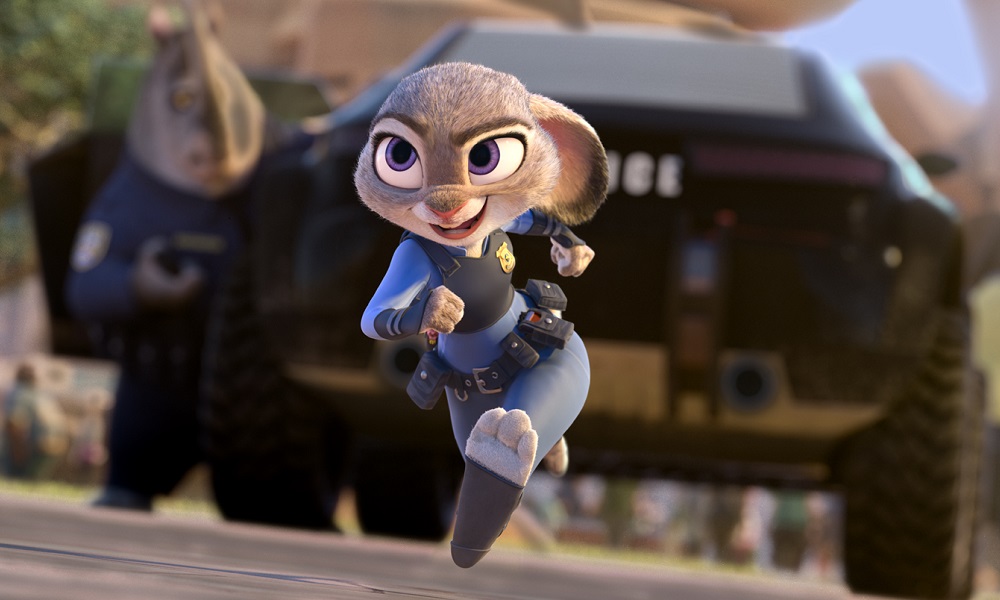 From an early day, something felt very different about Zootopia. The House of Mouse, having wisely decided to give the princess shtick a breather, has instead turned to anthropomorphic animals to deliver their latest hit… and “knocked out of the park” is an understatement. They start with a strong concept, add a marvelously satirical film noir mystery to solve, deliver some pitch-perfect actors for the voices, expand their visual palette to one of the most impressive efforts in recent years… and to top it all off deliver a heartfelt plea for tolerance and understanding that feels as timely as today’s headlines. It’s a bit of a miracle, though judging by Disney’s impressive track record with animated features of late, we shouldn’t be surprised.

Indeed, its strongest element – a barely disguised denunciation of racism – springs quite naturally from its central concept of a word where humans never existed and animals all developed sentience more or less simultaneously. Their greatest city is Zootopia, with different ecosystems comprising different neighborhoods and the same sorts of problems plaguing it that we see in our world. The filmmakers took that notion while insisting that the animals remain animals, not just people in animal form. (Speaking of which: you’re welcome, furry community.) They remain the same size as their real life counterparts, with tiny doors for tiny critters, and size-appropriate dwellings for various residents. This eventually leads to one of the film’s better visual gags: a chase through the mouse neighborhood of “Little Rodentia” that suddenly takes on the aspects of a Godzilla movie.

That sensibility feeds the main story, since it infers certain stereotypes and prejudices about this city’s residents that our heroes need to overcome. Are you a fox? Well you must be a con artist! Or a rabbit? Better not try to be a cop. Sheep are followers, lions are leaders, and yaks are filthy, filthy hippies. That’s just the way things are. Zootopia’s various protagonists struggle against those assumptions, both in the immediate sense and as a way of fighting the larger problem besetting their city.

It starts fairly simple, as rabbit-from-the-sticks Judy Hopps (voiced by Ginnifer Goodwin), arrives to fill her lifelong dream of being a cop, but isn’t taken seriously amid the rhinos and water buffalos that make up the department. Saddled with a job as a meter maid, she stumbles onto a larger mystery when a series of citizens – all from predator species – suddenly go missing. She wrangles the unwilling assistance of Nick Wilde (voiced by Jason Bateman), a street hustling fox with stereotypes of his own to overcome. They work fantastically well as a mismatched duo, allowing for some clever digs at buddy cop formulas without undermining the nuts and bolts of the sinister conspiracy they hope to unmask.

Like the best Disney movies, it juggles a lot of balls. And like them, it does so with such fantastic grace and artistry that the trick itself looks effortless. This setting could support a whole franchise of widely differing stories without breaking a sweat. The gags arise not only from the usual pop culture tropes (the Godfather digs are especial favorites), but from actual animal behavior married to human society. The supporting characters are fun and engaging and the plot, while nothing too extraordinary, pulls upon the unique nature of this world to provide a lot of original twists and turns.

But all that comes second to the film’s overarching message: simple, straightforward and a tad obvious, but delivered with plenty of heart and a lot of insight into human nature. Don’t judge a book by its cover. Differences can be strengths. You can be a better person by walking a mile in someone else’s shoes. They’re old lessons, but they’ve never felt more timely, and with the world still reeling over a certain short-fingered vulgarian’s terrifying failure to go away, they hit harder than they ever have in recent memory. Zootopia is a great animated film, but it might be something much more: a clarion call for sanity and understanding arriving just when we need it the most. Whether by design or simply good timing, that’s a potential legacy we should all be extremely grateful for.