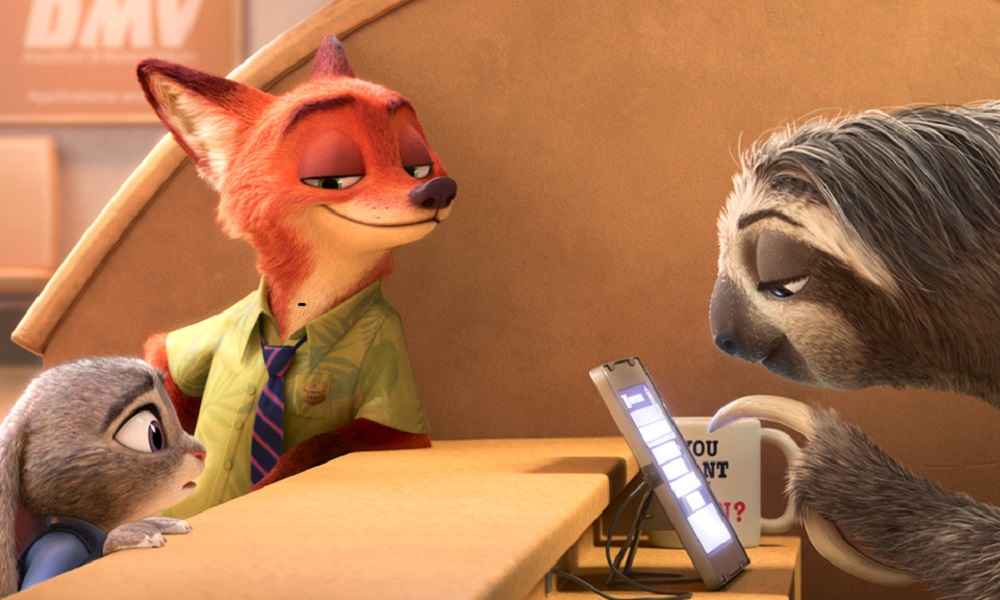 Animation plays by different rules than other movies. Because it’s all being done of the computer, the story can be tweaked and adjusted and changed during the production process without causing a lot of consternation. Indeed, one of John Lasseter’s great innovations – begun at Pixar and continuing at Disney – has been integrating those story changes into the process: refining the narrative even as the animation itself moves forward. While live-action films need to scramble with last-minute rewrites and scheduling reshoots when things change, an animated feature can use the same models, sets and rigging and simply arrange it differently to conform with the newest version of the script.

Disney’s latest animated feature, Zootopia takes full advantage of that process… to both the joy and consternation of its writing team. While it was clear from the beginning where they wanted to go with this movie, the specifics took some time to develop, as the team explained at a recent early press look at the movie.

“I always loved Disney’s Robin Hood,” co-director Byron Howard explained. “And it has been 20 years since The Lion King. I thought the time was right to take another run at a talking animal movie. But how were we going to do it in a way that was different from all the other ones that came before?”

The answer came in Lasseter’s commitment to world-building, and using that as the basis for a lengthy story development process “We started looking at the issue logically and found the story details emerging from there,” said co-writer Jared Bush. “How did this city form? How do animals from different climates live together? The more research we did – talking to biologists, zoologists, anthropologists – the more the idea of an animal-based metropolis took on interesting dimensions. Then it was a question of deciding what kind of story to tell with all that.”

With the fundaments in mind, the team then begins outlining the script, using storyboards and animatics to convey the action. The process of refining the narrative took years, and occurred while the various design teams were developing the physical look of the film and concept for the various characters.

“When I worked in sit-coms,” Bush explains. “The process was different. You wrote the script and they shot it in one day, and that was it. We all came from that world, that live-action world. Here, it’s all about refinement. Once the basic concepts are down, you keep improving and improving and improving until you have the very best itineration of all those ideas that got you so excited about the project in the first place.”

Citing an example, Bush showed a scene that had almost reached completion when it was subjected to a rewrite. The film’s protagonist, bunny cop Judy Hopps, returns home from her first day at work to deal with a less-than-welcome phone call from her parents.

“This is a great scene,” Bush said. “It flows, it has humor, it expresses what we want to say about the character. Then we put the whole thing in the toilet and flushed it away. We started again from scratch. Why? Because it could be better… it needed to be better.”

He then showed the same scene, with the same basic start and end points, completely rewritten. Turns out, he was right. It got better, it felt tighter and the character now had a strength and a sense of very funny exasperation that she lacked in the first go ‘round.

“John and the Disney team can facilitate that,” Bush explained. “More importantly, they’ve made it an integral part of the process. And I think people can see it in the quality of work they’ve generated over the last few years.”