One of the great made-for-TV films ever produced was 1971’s “Duel” directed by a young Steven Spielberg and based on a short story horror legend Richard Matheson. Wrecker takes its inspiration and indeed much of its plot directly from Duel but unfortunately it hasn’t nearly the pedigree. 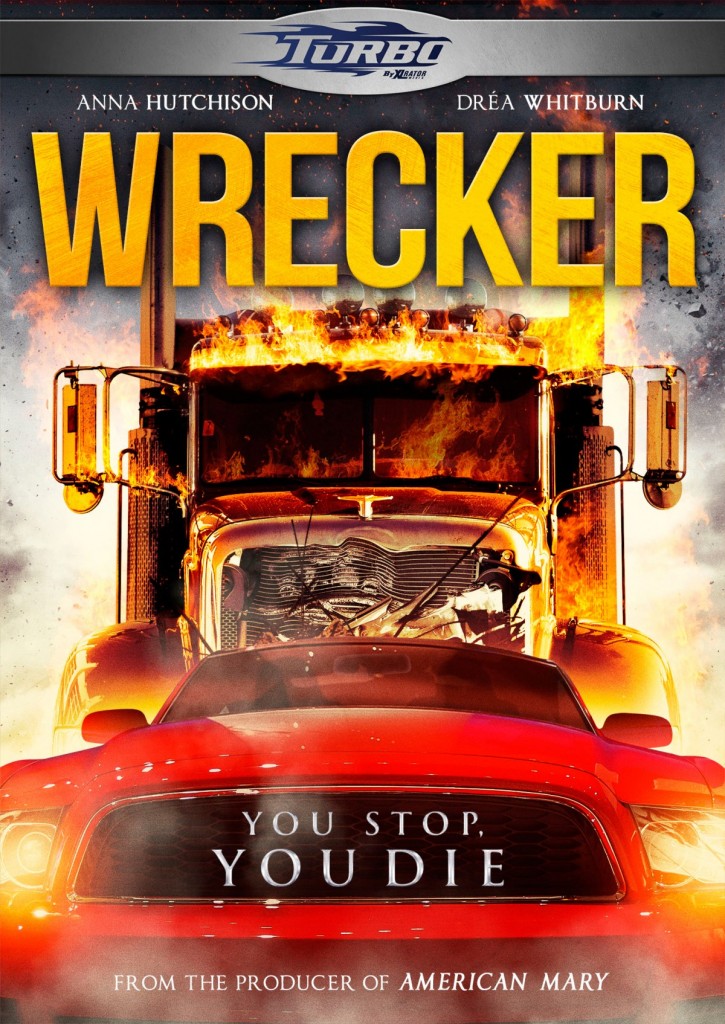 Emily (Hutchison) and Leslie (Whitburn) are a couple of party girls travelling from Washington to California in a hot, red Mustang GT along relatively deserted mountain roads. They soon come across a slow-moving wrecker towing a station wagon. They pass the truck (which was the same transgression committed in Duel) and soon find themselves stalked and terrorized by the truck driver.

Unfortunately this is where the similarity ends with Spielberg’s classic thriller. One you get past the basic plot Director Micheal Bafaro (who has directed a number of low-budget horror/thrillers) doesn’t have the skill to make this an effective suspense film. In fact he fumbles the action badly from beginning to end and in numerous ways.

Let’s start with the uneven scenery of the “mountain” roads. Along the way the girls pass the exact same boulder along the exact same stretch of highway more than once, even though hours pass in between. If you’re going to reuse footage you might want to make it with terrain that is less conspicuous. Then there is the fact that the scenery will change from mountains to rolling farmlands and then to deserts in the blink of an eye. There’s no attempt at consistency.

Speaking of consistency there is none to be found in the action sequences either. Despite the fact that the girls are driving a mustang and consistently going in excess of 100 MPH they can never seem to get further than a few hundred yards away from the tow truck…which is still dragging the old station wagon. The camera work is also shoddy. Inside the car the girls are driving with pedal to the metal but exterior shots make the car look like it is out for a leisurely Sunday drive.

When the girls are not shrieking at the top of their lungs and chewing up scenery in true drama queen fashion, they are acting purposefully stupid. Throughout the wrecker’s pursuit we see small enclaves of residential areas and businesses but never do they attempt to get off the road and seek help. And of course no where they travel has cellphone reception so forget that option.

At one point they do find a pay phone and attempt to call the police, only to be forced to leap out of the way just as the wrecker plows through the booth, in a scene lifted directly from Duel. Even the climax liberally “borrows” from Duel but with the added horror film plot device of the antagonist perhaps not being as dead as we thought.

Are there any positives in Wrecker? Well, the two female leads are certainly attractive and if you are going to copy another film so thoroughly you could do much worse, but if you see only one film where a driver of a passenger car is pursued by an evil trucker, see Duel.