Wonder Woman: Come Back to Me #1 – Comic Review 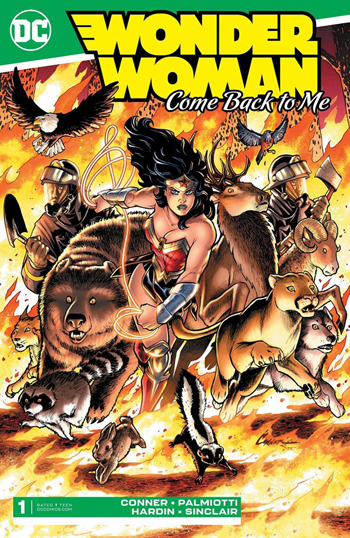 Originally published in “Justice League Giant”, one of four Walmart-exclusive “DC Comics” titles that debuted in 2018 and which were designed to put the books in places were a brand new audience “can’t normally get them”, this twenty-two page periodical’s plot is arguably reminiscent of both the mid-Seventies “Marvel Comics” book “Skull The Slayer” and the equally short-lived American science fiction television series “The Fantastic Journey”. In fact, even towards the very end of this publication, those readers familiar with John Buscema and Mike Esposito’s dynamically-charged July 1976 cover illustration of Jim Scully battling a heavily fanged prehistoric sea monster will immediately sense the resemblances in Wonder Woman’s confrontation with a similarly-sized, multi-toothed oceanic monster that rather foolishly attempts to dine upon the water-logged Amazon shortly after her invisible plane has crash-landed; “I sure hope you haven’t lost your [super] strength, too!”

Mercifully for those bibliophiles ancient enough to recall such parallels however, Amanda Conner and Jimmy Palmiotti’s narrative for Issue One of “Wonder Woman: Come Back To Me” still contains plenty of innovation in its own right, with Diana’s battle against a truly terrifying wild fire in Park County, Montana, providing a particularly compelling action sequence. True, the demigoddess’ bemusing ability to talk to the local fauna so as to gain their co-operation in rescuing a number of injured fire-fighters would debatably be more closely associated with a “Disney” princess than one sculpted from clay by Queen Hippolyta on Themyscira. But the emergency crew’s eventual rescue, courtesy of some serious tree-smacking by this comic’s titular character, at least provides this tale’s opening chapter with a unique, if not rather contrived, solution to a natural disaster.

Furthermore, the fact that William Marston’s creation can’t just “fly them out of here one at a time” without the various animals’ help, affords Chad Hardin the opportunity to pencil plenty of endearingly cute squirrels, rabbits, deer and raccoons, as well as a seriously intelligent-looking big brown bear. Indeed, the GLAAD Media Award-nominee’s drawing is so pleasing to the eye throughout the book, that it almost makes some of the collaborative writing partnership’s awfully hackneyed speech stomachable, and definitely makes it clear why, in an interview with the “comics and pop culture news website “The Beat”, Conner made it clear that she felt lucky to get the American artist to illustrate her story-line.