Jinkies!, the Mystery Inc. gang is about to face the ultimate betrayal! Designed by the team behind the critically acclaimed Betrayal Legacy, Betrayal at Mystery Mansion lets players take on the role of Scooby-Doo, Shaggy, Velma, Daphne, and Fred, as they explore the mysterious mansion to find clues, run away from (or toward) scary noises, and maybe even catch sight of a monster. Or was it a g-g-g-g-ghost? Zoinks! Betrayal at Mystery Mansion will be available in stores everywhere on May 15, 2020, the same day the new SCOOB! movie, distributed by Warner Bros. Pictures, hits theaters. 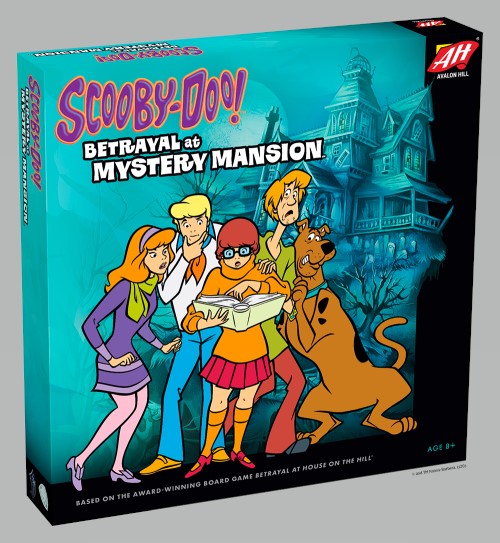 Betrayal at Mystery Mansion is jam-packed with more goodies than a Super Shaggy Sandwich, including all new tiles, tokens, cards, and 25 haunts based on popular Scooby-Doo episodes and movies. Once players find enough clues to learn what’s really going on, the haunt begins and one player switches sides to play the role of the Monster. Those meddling kids then try to stop them before they carry out their sinister plan, hopefully pulling off the mask to reveal it was Mr. Wickles all along!

“Betrayal at House on the Hill is a perennial favorite in the board game world and Scooby-Doo is such a natural fit,” said Rob Daviau who acted as a consultant on this project. “We managed to keep the mystery, spookiness, and high replayability of the original game, while providing simple-to-learn rules for younger audiences and people new to Betrayal.”