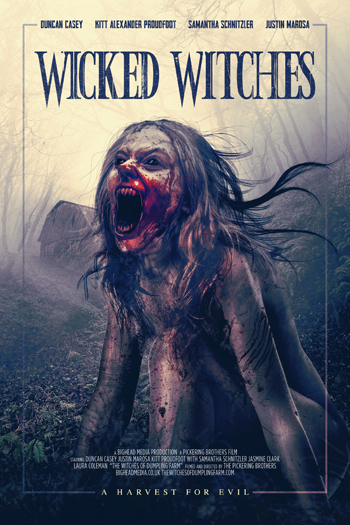 After being thrown out of his home by his wife for being promiscuous, Mark finds himself back at Dumpling Farm, a place of youthful memories and parties, but things aren’t quite right. His old buddy Ian, who has never left the place, is possessed by a group of demonic, flesh eating Witches. Using Ian and his farm, these beautiful Witches honey trap Mark and his friends to consume their souls.

Like a lot of horror movies filmed in Britain; Wicked Witches looks like it’d fit right in on the BBC. The movie is well lit, background music is a bit bland, actors are competent and able. However, Wicked Witches also suffers from the same problems most mediocre horror films suffer from. Issues such as: shallow unsympathetic characters, confusing story, unoriginal plot structure, and discordant incomplete thought that lead to a car wreck of incongruous continuity.

Mark (Duncan Casey) moves into his friend Ian’s (Justin Marosa) farm where he expects to live out memories of their youth, but finds himself trapped in the horror that Ian has invited in.

There are a lot of movies that follow similar story lines and yet still find success because they either do something original and spin the cliche on its ear or make the old seem fresh with different spins on the same tired old subject.

When watching a movie, the concept of the “suspension of disbelief” is used to describe the viewer’s immersion in the story at hand. This immersion, if interrupted can lead to a lack of enjoyment in the story. Sometimes these interruptions are external, people coming into the room and talking to the viewer or lights being turned on in a movie theater, but sometimes that suspension is interrupted by the film itself, but situations or events that are out of place or just so random that they stand out and interrupt the flow of story and the experience.

Wicked Witches has a couple moments that seem so out of place, so much so, it interrupts story flow. One of the plot points in this movie, has Mark calling his drug addicted friend played by () to have a party and invite their old college friends to join in.

In the middle of this moody and almost claustrophobic movie, we have what looks like a full-on music festival popping up on a farm. Complete who a large group of cars, tents, band, and lights in a farm field. There is a heavy emphasis on the band, in this case the directors of this movie, showcasing their awesome, but kind of out of place music at this gathering of school friends and maybe festival goers?!

The size of the parking vs the number of the people at this event is uneven. Then when the movie shrinks down to follow Mark around after the witches reveal themselves, there is no sign of widespread carnage or that a large party existed on the farm with maybe the exception of a lone RV sitting at the farm.

When the witches of the title show up, they are mysterious and all beautiful. When the nightmare begins, things get gory and fun. They’re overpowered and rip off limbs with ease despite looking like their victims could easily beat them down by standing up and punching them on the chin or grabbing a branch and smacking them in the face.

The story is simple and not complicated or hard to follow. There is very little depth to it, or the characters, it’s just a simple vehicle, like a Ford Pinto, yes, it’s driveable. Wicked Witches does deliver some moments where it works a little bit, but all together like a Ford Pinto it breaks down and there are some much better things out there to drive.