“What Death Leaves Behind” – Movie review

Personal stories have the benefit of drive but the disadvantage of myopia. 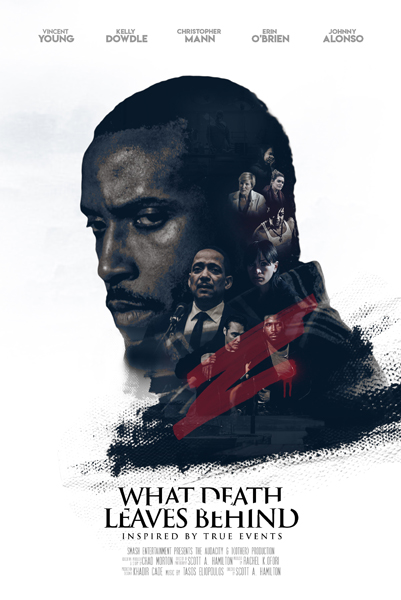 What Death Leaves Behind initially seems like either an arthouse drama or a sedate horror film. As time goes on it reveals itself to be more of a tone poem with every single scene stretched to the breaking point because the creators couldn’t allow a single beat of acting, a single protracted scenery capture, a single bit of dream sequence be edited out.

The problem with letting everything flap in the wind and admiring all the work without the cuts in post is even the best actors get jittering when the camera just keeps rolling…and rolling. There’s some nice performances here (and there need to be given how much emoting goes on) but other times people stumble over dialogue, are clearly reading from scripts just off screen, or are clearly improvising their lines and constantly repeating words to fill up space until they can think of what to say next.

The first thing we see in WDLB is a quotation about non-linearity. I have no idea why this point is pushed so hard in the production of this film since unlike something like Memento this movie DOES move along in a generally linear fashion. At times it deviates backwards in time, but we already have a term for that: flashbacks. Sometimes these flashbacks are even blatantly indicated with a title card reading ‘the past’. I think some kind of attempt was being made here to fool around with conventions of progression and make some kind of subtle reveal (the description promises a ‘shattering truth’), but the reveal was so subtle I didn’t pick it up. By itself the story is so straightforward any detours reconnect to the general flow quickly, nothing is that ambiguous, and the setup is not exactly unique.

Man receives transplant, witnesses visions afterwards. This has been a film concept since The Eyes of Laura Mars. The major difference between a potboiler like that and WDLB is that one uses the notion for a thriller vehicle. This film pulls the drag shoot and has crawling dolly shots accompanied by light piano music, open air compositions of distant silhouettes and dull grey skies, crowded shadowy rooms, piercingly bright medical beds. Except for the semi-supernatural notion of residual memories inside cells this could easily be mistaken for a relationship drama which lots of very intense people in everyday locations talking about their feelings and specifically their issues.
I was thoroughly bored because of the glacial pacing personally. It’s one thing to linger on troubled people with deep-seated emotional trauma. It’s quite another to endlessly hold on a wide largely empty camera shot of people doing very little or waiting with increasing impatience when the plot has been revealed but we really must spend time listening to a story someone has decided to tell or watching a character do something in the kitchen.
This film is dedicated to someone, and I take a guess it was someone who needed a transplant. The dread but also courage of donor hopefuls is highlighted throughout the film with characters stating clearly how they don’t desire to be seen as victims but they don’t want to be ignored either.

Kind of odd that a movie so sympathetic to that experience however would focus so much on a man driven to mania by paranoia due to his transplant. I’ve seen this called a cautionary tale about the signals of brewing insanity and a warning about leaving it unchecked but the whole idea of borderline magical visions due to a kidney transplant is just hokey enough to make this more serious intention feel awkward.

If you want to see a lot of consummate actors fumble through improvisation in beautifully shot suburban landscapes and occasionally someone dies abruptly this is undoubtedly an option. However if you want something to feel besides heavy gloom and you feel something about a man going through nightmares after a transplant should give you some splashy kills, this is not the place to go.

Neither is this exactly an evolution in art films unfortunately. The spirit is willing, but this drama is so much of a personal story it doesn’t easily let anyone else in.