LATEST
Home Movies War for the Planet of the Apes: Soundtrack Review

War for the Planet of the Apes: Soundtrack Review

Michael Giacchino returns to score another installment of The Planet of the Apes franchise; making him the second composer to write music for more than one film of the franchise. That places Giacchino in great company, as that other composer is Jerry Goldsmith who composed the original 1968 film and Escape from the Planet of the Apes. How does this score stand on its own? It is perfect.

In 2011 Rise of the Planet of the Apes looked to breathe new life into an old franchise that, ten years prior, had a miss-fire of a relaunch. The new score, composed by Patrick Doyle was competent for the film, but it did not resonate with me as much as the 2014 sequel, Dawn of the Planet of the Apes did. That score, composed by Giacchino, had the right mixture of elements that complimented how in-depth the of the story of the second film was. Giacchino gave us action, tension, compassion, and above all, something that lingered. To hear that score alone is reason enough to see why Matt Reeves, director of Dawn, tapped Giacchino again to round out this new Apes trilogy.

I have seen the film in theaters. Prior to that, I had about a week’s worth of listening to the score on its own. This was difficult because I was still listening to Giacchino’s other recently released score for Spider-Man: Homecoming (see review). I say that it was difficult because upon listening to that the first track “Apes’ Past of Prologue” I was sucked back to the planet of the apes. No score, not even Danny Elfman’s (for Tim Burton’s 2001 rendition) had put me into that mindset better than hearing Goldsmith’s score. It’s a perfect appetizer of moods and colors as we prepare for the final conflict between man and ape. Yes, it has all been brewing to this. What I did not know was that Griffy Giacchino had actually composed this nearly 11-minute prologue. In fact, it reminded me of not only Goldsmith’s original Apes’ score, but also Goldsmith’s music for Patton. 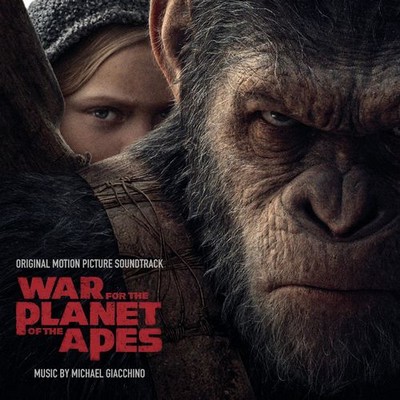 “Assault of the Earth” (Track #2) is one of 4 tracks on this score that are over 5 minutes long. At approximately 00:47 seconds the score picks up the tone of Goldsmith’s original Apes score. Giacchino uses a mad collection of snare drums, wood wind instruments, as well as unusual, almost unidentifiable, devices to compose this track. However, it is “Exodus Wounds” (Track #3) where the theme of the film emerges. It starts off as simple piano keys that are both gentle and sad. Appropriate, as Caesar’s whole world comes crashing down. Giacchino then elevates this melody with a whole orchestra and chorus, yet before it gets too big, he returns it to those piano keys again. It is a great parallel between how big the story of Caesar and his followers is, yet this story is also one about Caesar fighting his own demons and not becoming the monster he knows he can be. The mood completely changes again and Giacchino takes us into John Barry territory with epic deep strings. It seriously sounds like something out Barry’s You Only Live Twice or Moonraker. Fear not, as more of this melody returns in “The Posse Polonaise” (Track #4). With this jump between melody and long tracks, it is evident that this is a suite of the music composed for the film and not a complete score.

There comes a time when you hear a piece of music and it is more than the scene which it accompanies. My best example of this is Hans Zimmer’s “Journey to the Line” from The Thin Red Line being such a track. What emerged here in the War for the Planet of the Apes is “The Ecstasy Of The Bold” (Track #8). It is an incredible build of emotion and music that, for decades, those that make movie trailers will be using. Trust me, if you only want one track on this album, this is the one.

I had previously mentioned Danny Elfman’s score from the 2001 Planet of the Apes. Knowing full well that Giacchino is a fan of the franchise, I have to think that “ A Tide In The Affairs Of Apes” (Track #10) is his little tribute to Elfman’s contribution. There is a fantastic beat played out on a Xylophone here. Though by the time it is over, Giacchino brings it all home to his film with the aforementioned simple piano keys.

As you can tell, by now, I love this score. It was a treat to listen to it over and over again. Michael Giacchino is quickly becoming my new favorite composer. I have a couple of final thoughts. The first is that I would easily purchase a full score from this film. A two disc release would easily find its way into my collection. This is not out of the question because Giacchino’s Star Trek Beyond garnered a full release just a few months after the single release. It would allow the most obvious sore thumb of missing music to be added, which is Giacchino’s ape rendition of Alfred Newman’s “20th Century Fox Fanfare” which started the film. Secondly, if you are a fan of the Apes franchise, there is a neat little easter egg in the “End Credits” (Track #17) that you will instantly recognize. Hopefully, this score will get noticed by the Academy, the Grammy’s, and the Golden Globes. By far, it is Giacchino’s best work to date.