War for the Planet of the Apes — Movie Review 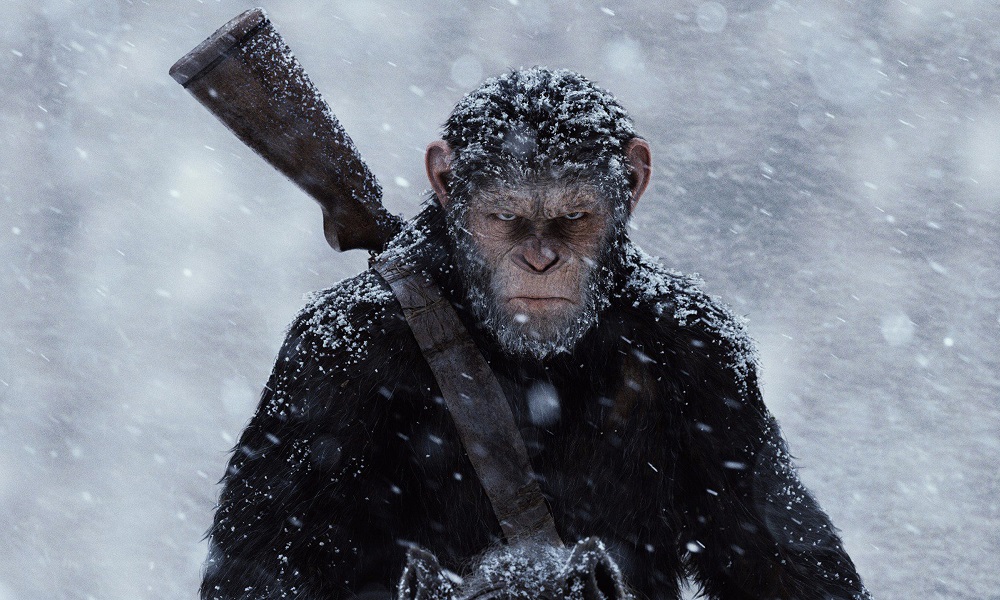 The Planet of the Apes reboot in 2011 kind of snuck up on everyone, and even now it remains a bit of a stealth blockbuster. The grim subject matter and merciless gaze at our own inhumanity doesn’t make for repeat viewings the way the MCU or Harry Potter films do. And yet their power is undeniable: rebooting one of science fiction’s most iconic franchises in breathtaking fashion and – with the sole exception of the 1968 original – possibly rendering every other Planet of the Apes movie an afterthought.

War for the Planet of the Apes exceeds the sky-high quality of its two predecessors… thanks in no small part to star Andy Serkis, whose evolved chimpanzee Caesar may even eclipse Gollum as his greatest creation. Praise comes easy and often for the likes of him, but I’m hard-pressed to think of any actor working today who has fundamentally changed the face of their craft the way Serkis has. Caesar simply puts his innovative practice on full display, aided by another sterling script and fine direction from Matt Reeves to bring this saga to a richly satisfying conclusion.

The action picks up a short time after the end of the last film. Disease has wiped most of humanity from the Earth, created and spread by the same scientific tampering that gave Caesar and his ilk their intelligence. The apes are now embroiled in a genocidal war against remnants of the U.S. Army, led by an unnamed Colonel (Woody Harrelson) willing to do whatever it takes to put his foes in the ground. Harrelson deserves his share of credit for lending this entry the brutal, desperate vibes it needs to thrive: channeling Marlon Brando in Apocalypse Now but lending the role his own shockingly icy spin.

Caesar has evolved into a first-rate soldier, trying madly to fend off the remaining humans and lead his people to something resembling safety. But he’s haunted by memories of his long-dead foe Koba (Toby Kebbell), whom he defeated at the cost of a fair number of principles, and who isn’t about to depart his subconscious without a little payback. He needs more than victory against these humans. He needs a reason to believe in a better future: a way of living that improves upon the smoking ash heap humanity has left behind.

Serkis infused his earlier performances with exquisite physicality, conveying mood and emotion through action rather than dialogue. His vocabulary expands considerably here, but the essence of the character remains: a good soul pushed to the wall and trying to keep his people safe in a world hell-bent on destroying them. The weight of his years has begun pressing him down, the despair and resignation gnawing at his soul. Yet he pushes on in the face of overwhelming odds, propped up by sheer rage sometimes, but never surrendering the hope that something better lies beyond.

He gets a big boost from Reeves’ tight, claustrophobic direction, which evokes the first two Apes pictures without leaning unduly on either of them. It’s still the same world (we move from San Francisco into the Sierra Nevadas), but the remnants of human civilization are rapidly crumbling. He also finds clever ways to nod at the earlier Apes movies from the 60s and 70s, evoking knowing chuckles without becoming self-indulgent. He even breaks the excruciating tension with well-earned moments of humor (helped by Steve Zahn, never better as a slightly unbalanced chimp who joins Caesar’s crew).

Beyond the nuts and bolts of a solid action movie, War for the Planet of the Apes establishes strong psychological footing for its larger points. The relentless battle for survival here remains tragically unnecessary: turncoat apes serve the humans as “donkeys” and a human girl (Amiah Miller) is adopted by the orangutan Maurice (Karin Konoval, another indispensable part of these movies) in an act of pure mercy. Yet Harrelson’s army fears the future, and opts to destroy everything rather than concede the need to share it. It blinds them to the sheer needless brutality of it all, leaving Caesar and his apes to look for a higher path even as they stoop to the same do-or-die tactics.

It makes this Apes the most powerful of an already strong trilogy, with a message that has never felt more timely and a gorgeous curtain call for a character who has quietly climbed into the realm of greatness. That War for the Planet of the Apes maintains such a standard isn’t surprising considering the talent on display, but it’s worth pausing at the end of an extraordinary trilogy just what a stellar success this particular reboot has been.