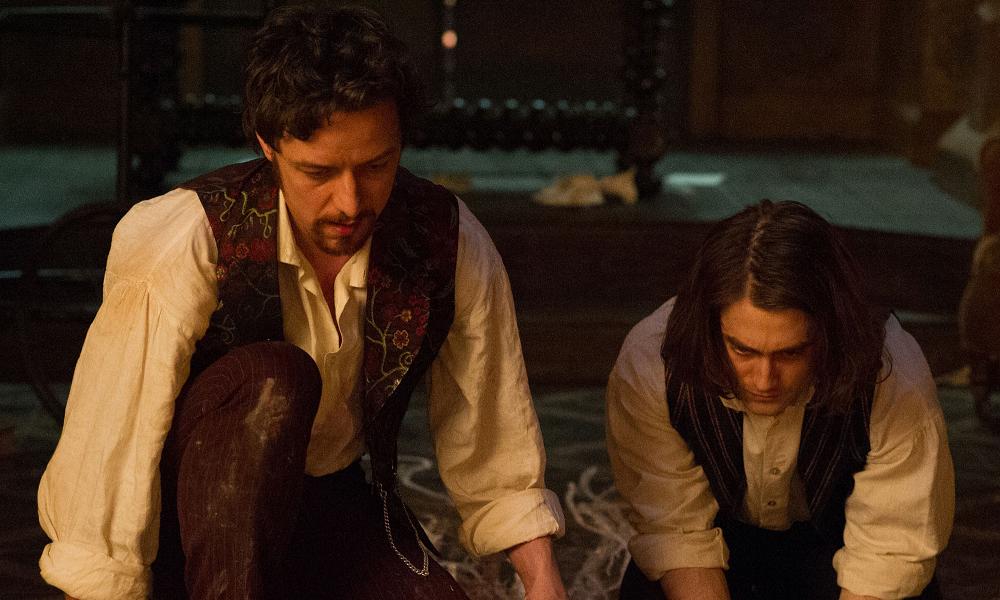 You say “goes completely off the rails” like it’s a bad thing.

Consider, for a moment, the likes of James McAvoy, a very good actor who embraces the overheated nature of Victor Frankenstein without a second thought. “Over the top” would be a kindness. There’s not a piece of scenery to be found that he doesn’t chew on like a teething pack of Rotweillers. And yet he does so without losing the character — a character who, let’s face it, is made for those kind of histrionics — and without becoming anything less than entertaining. Is it a bad performance? That’s in the eye of the beholder. Subtlety is not this movie’s modus operandi and McAvoy is more than happy to play along. But the gusto he brings to his work here demands nothing less than our complete attention, and the knowing twinkle in his eye suggests that he’s in on the joke as well.

In that sense, he’s not much different than Peter Cushing’s famous take on the character in the Hammer cycle from 50 years ago, and while Cushing was much more buttoned down his sense of archness has been fully transported to this more modern effort. Much of Victor Frankenstein feels cut from the Hammer cloth, and while that might not find the kind of mass appeal a project like this needs for financial success, fans of a certain temperament will find its outlandishness aboslutely intoxicating.

It presents itself as a prequel of sorts to Mary Shelley’s immortal story, taking gleeful license at every opportunity yet somehow staying true to her darkly meditative heart. We open with Victor rescuing a beaten hunchback from the local circus, restoring him to health and naming him Igor to serve as his assistant. The grateful young man (Daniel Radcliffe) possesses a knack for medical knowledge in one of the film’s more preposterous leaps, making him uniquely suited to help Dr. Frankenstein with… well, you know.

The script cheerfully lurches in a dozen different directions at once, wrapping up a sinister young nobleman, a beautiful trapeze artist and an obsessed police detective in its tale of science run amok. They all serve as pinballs for McAvoy to bounce off of, with Radcliffe dutifully serving Sancho Panza duties as their quest to perfect immortality sends them veering into grotesque horrors. Director Paul McGuigan makes no apologies for his rutting-mastiff tone,laying severeal layers of black comedy over the horrific events to remind us that it’s all in good fun. To that he adds gloriously distrubing visual effects, whch rely on the practical as much as the computer generated and which seek to entertain us in the same sick way as a seven-year-old might show off his bug collection.

And again, that’s not a bad thing, though plenty will find it distasteful. Underneath it all, the strong firm beats of Shelley’s heart can still be heard. We understand Frankenstein’s madness because we know the character so well, and as his quest to defy death itself leads him in horrifically dark directions, the film never laughs at the disturbing implication of where it all might lead (though to be sure, it laughs at just about everything else.)

That affords it a certain unique quality: a movie that understands Shelley quite well, but is just as concerned with letting the steam out of it all as it is with reminding us why this story still holds so much power two centures after it was first written. McGuigan balances his freak-show comedy with a real understanding of the horrors beneath it all, and the tics and shortcomings of his protagonist that eventually cause it all to come crashing down around his ears

He also allows Igor to flourish as a figure dragged half willingly through Victor’s growing obsession. There was no corresponding figure in the novel, but pop cultural developments have since demanded it, and Radcliffe continues to show an affinity for this kind of material that again reminds us of what a strong performer he’s become. He and McAvoy have terrific chemistry together, and watching these two staggering their way from one horrific misadventure to another holds the kind of rare charm that might merit a viewing all on its own. Radcliffe doesn’t wink at us nearly as often as McAvoy does, and his more grounded performance helps nourish the darker side of the story while his costar gleefully ups the ante at every opportunity.

That might not be everyone’s cup of tea, and frankly I expect Victor Frankenstein to receive a thorough pounding both from the critics and at the box office. But those with the right sensibilities have seen this kind of take on the story before, and watching it reimagined in this way holds pleasures that go beyond the guilty ones. If you can feel where it’s coming from, it will speak to you in the most marvelous way, a fact that wouldn’t be nearly as charming if it had to explain the joke to everyone. Hollywood has taken risk-free moviemaking to untold new heights, seeking new ways to devour its own tail with ever new reboot and reimagining. Victor Frankenstein plays that game, but applies its own rules on the field, and that alone makes it worth a quiet celebration. That’s the only quiet thing about this movie and even those attuned to it will find it goes way too far sometimes. But who is the title character if not a man willing to push a few boundaries here and there? Victor Frankenstein clearly understands where its title character is coming from and wanted to recreate his seething madness every way it can. A guilty pleasure it most definitely remains, but credit it for wearing that label like a badge of honor instead of something to be hidden from sight. Movies are more soulless and dead than ever. This one sets itself apart simply by taking its anti-hero’s most famous declaration very seriously indeed.