MONSTER INSIDE ME: A REVIEW OF VENOM (2018) SANS SPOILERS

In 1999, Sony Pictures bought the movie rights to Spider-Man from Marvel Entertainment for $7 million, even though it had been offered the rights to all the Marvel Comics characters except the X-Men and the Fantastic Four (which had already been optioned by 20th Century Fox) for $25 million.  Sony wasn’t interested in the characters that would later populate the Marvel Cinematic Universe (MCU)—a franchise so extraordinarily successful that Disney bought Marvel Entertainment for $4 billion, the same amount it later paid for Lucasfilm—because “[n]obody gives a shit about” Iron Man, the Hulk, Captain America, Thor, Doctor Strange, etc.  (Well, as they say, hindsight is 20/20…)

Sony’s first movie featuring the web-slinger, Spider-Man (2002), is a near-masterpiece, but the ones that followed suck.  Furthermore, Sony’s first five Spider-Man movies provided diminishing box office returns: each made less money than the previous.  Thus, Sony agreed to a temporary symbiotic relationship with Marvel Entertainment regarding Spider-Man.  Marvel Studios would co-produce two Spider-Man movies for Sony—Spider-Man: Homecoming (2017) and its sequel—and in return would be able to bring the Spider-Man “solar system” into the Marvel Cinematic Universe for those two movies plus Captain America: Civil War (2016) and Avengers: Infinity War (2018) and its sequel.

But while Marvel Studios got the Spider-Man solar system for its Marvel Cinematic Universe (for five movies, anyway), it didn’t get the rest of the Spider-Man galaxy.  So Sony’s free to use the dark matter of that galaxy to create its own Marvel film franchise, one it refers to internally as Sony’s Universe of Marvel Characters (SUMC).  This shared fictional universe would be populated by darker, edgier characters such as Venom, an anti-hero who began as a villain.  Venom is a life-form comprised of an amorphous, intelligent alien symbiote bonded with a host; and the symbiote can provide its host with superhuman strength and healing ability and form tentacles, spikes, and a monstrous bulletproof “costume.” 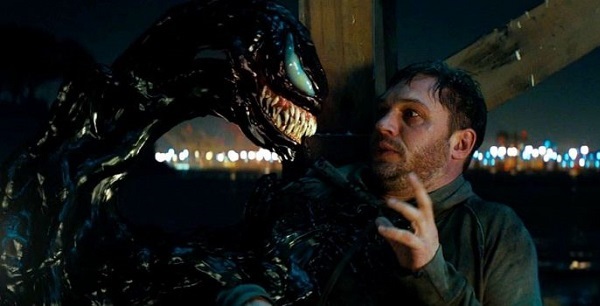 In the comics, Venom began as a shapeshifting, self-regenerating costume acquired by Peter Parker on an alien world.  But in the movie Venom (2018), it’s brought to Earth—along with three other symbiotes—from a passing comet by a manned private spacecraft belonging to the Life Foundation.  (One of the astronauts being named Jameson is a sly nod to Spider-Man’s milieu, in which J. Jonah Jameson’s son is an astronaut.)  The Life Foundation’s founder and operator, malignantly narcissistic scientist-entrepreneur Carlton Drake, in response to overpopulation and climate change, wants to find new worlds to inhabit and believes the symbiotes are the key to humans being able to survive outside of Earth.

But top investigative reporter Eddie Brock tries to expose that Drake’s “entire empire is built on dead bodies” and in the process loses his career, fiancée, and standard of living and is invaded by the Venom symbiote.  Brock, as played by Tom Hardy, is a silly, self-centered loudmouth who shambles like an old ex-boxer and slumbles with a “New Yawk” accent, making him sound like Tony Danza drunk.  And Drake, as played by Riz Ahmed, seems more like one of the nerds in The Big Bang Theory TV sitcom than an evil genius who’s willing to destroy the human species to save it.  And these poor performances by two award-winning actors as the main protagonist and antagonist aren’t Venom’s only failings. 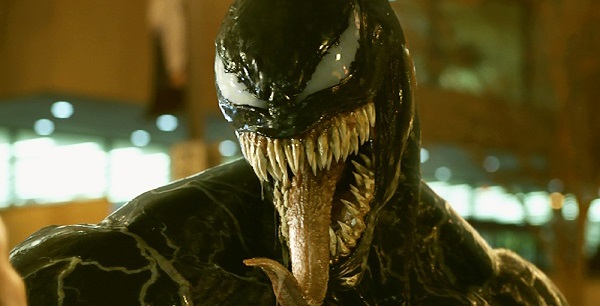 Venom’s uneven, uncertain tone keeps it in a limbo between the horror, action, superhero, and comedy genres instead of allowing a successful integration of them.  Its hackneyed, overly expository dialogue helps keep the audience at arm’s length from its characters and action.  Its action is lackluster, almost perfunctory, despite the opportunities afforded by the situations and the symbiotes’ abilities.  And the humanoid forms of the symbiotes look like cheesy latex suits rather than CGI.  (The scariest thing in the movie is the red wig Woody Harrelson wore as serial killer Cletus Kasady for the mid-credits scene.)  But the very worst thing about Venom is that it had the potential to be a very good movie.

Its premise and basic plot are perfectly sound, and its theme of parasitism vs. symbiosis is fairly deep.  So the story’s foundation is solid.  But what was built upon that foundation should’ve been a riotous horror comedy with the evolving friendship between Brock and Venom as its emotional core.  (After all, the classic comedies All of Me (1984) and Innerspace (1987) get maximum mileage out of the “shared body” premise by dealing with the logical consequences of and natural human reactions to it and exploiting the “reluctant partners” dynamic.)  In addition, a classic Nicholas Cage-style wild man—endearingly goofy, moody, and unstable—would’ve been perfect for the movie’s protagonist.

Instead, Hardy’s Brock is insipid and unsympathetic and the movie misses opportunity after opportunity for poignance and humor.  Brock, like and according to the Venom symbiote, is a loser.  But he’s not a lovable loser and there’s no feeling of an “odd couple” friendship developing between them.  Furthermore, there are no feelings of wonder and humor in the fantastic and absurd occurrences caused by the Brock-Venom situation.  (In fact, almost all the movie’s unfrequent attempts at humor fall completely flat.  The only bullseye is when Venom calls Brock a pussy for not being willing to dive out a window.)  But at least Venom, while bad, is painlessly bad—fast-paced and easy to sit through.