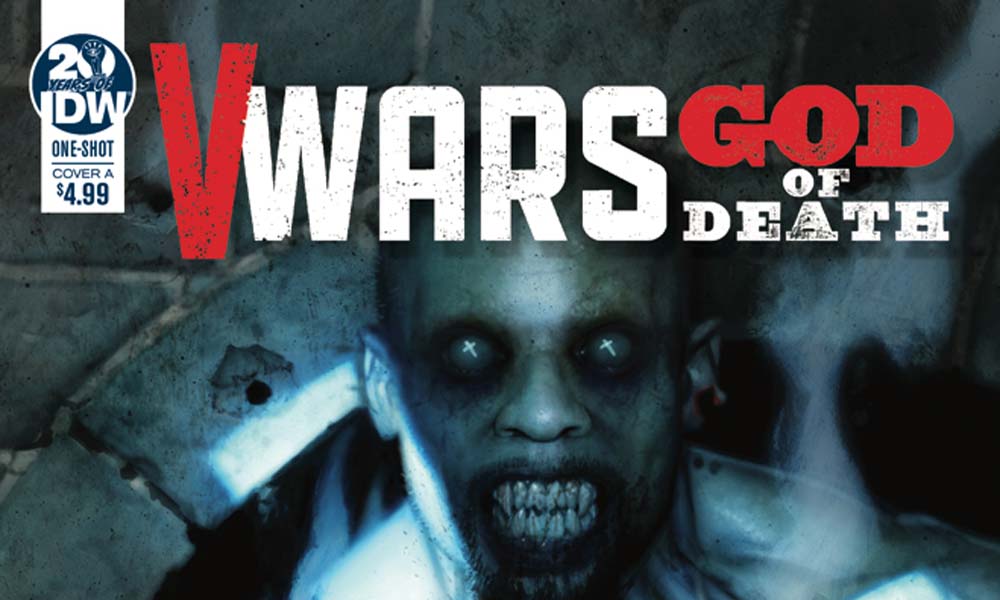 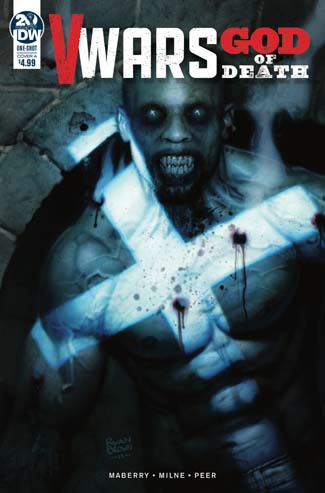 Somerhalder”, Jonathan Maberry’s script for this “V-Wars” one-shot both builds upon the established storyline of the short-lived “IDW Publishing” comic book series from 2014, as well as rather delightfully develops Michael Fayne’s fanatically self-righteous Red Empire into a decidedly devious ‘fresh’ threat to the current truce between Bloods and Beats. Indeed, the conclusion to this twenty-four page periodical rather dramatically turns the entire world of Luther Swann’s supposedly government-sanctioned military squad upside down, with the good doctor’s gun-toting soldiers inadvertently assisting the machinations of the vampiric one-time “barista in Manhattan” rather than preventing a Holy War which “I don’t think we can win…”

Dishearteningly however, in order to achieve such a radical change in fortune for the world’s most “foremost expert on the folklore and beliefs on vampires”, the five-time Bram Stoker award-winning author absolutely roars through his story-telling, transforming the former meek and mild anthropologist overnight into a hard as nails, merciless maniac with a decidedly dislikeable penchant for gunning down any and all blood-drinkers who happen to be so foolish as to stand between his automatic rifle and the book nerd’s mission objective. Admittedly, this distinct change to the character’s entire outlook upon life certainly ramps up the kill rate, with all manner of Bloods and Beats being torn asunder by an almost endless torrent of mutilating bullets. But such cold-hearted behaviour seems to have been far more in keeping with the perspective of Victor Eight’s commander, Big Dog, than the pacifist who against all the bigoted odds of Mankind incredibly “negotiated a peace with the V-Cells.”

Perhaps this publication’s biggest disappointment though, is Alex Milne’s somewhat coarse-looking interior artwork which, whilst undeniably dynamic when used to depict Maberry’s monumental gun-fights and all their incumbent gratuitous violence, appears to become increasingly more crudely-drawn and angular as the comic’s end approaches. In fact, as the plot to “V-Wars: God Of Death” pulse-poundingly progresses, there is arguably quite a noticeable decline in some of the Canadian’s pencilled panels, such as Swann’s awful realisation that he’s been duped into chasing after a fake patient zero, and resultantly many readers may well feel that at some point the well-known “Transformers” illustrator probably started rushing so as to finish before the magazine’s deadline…