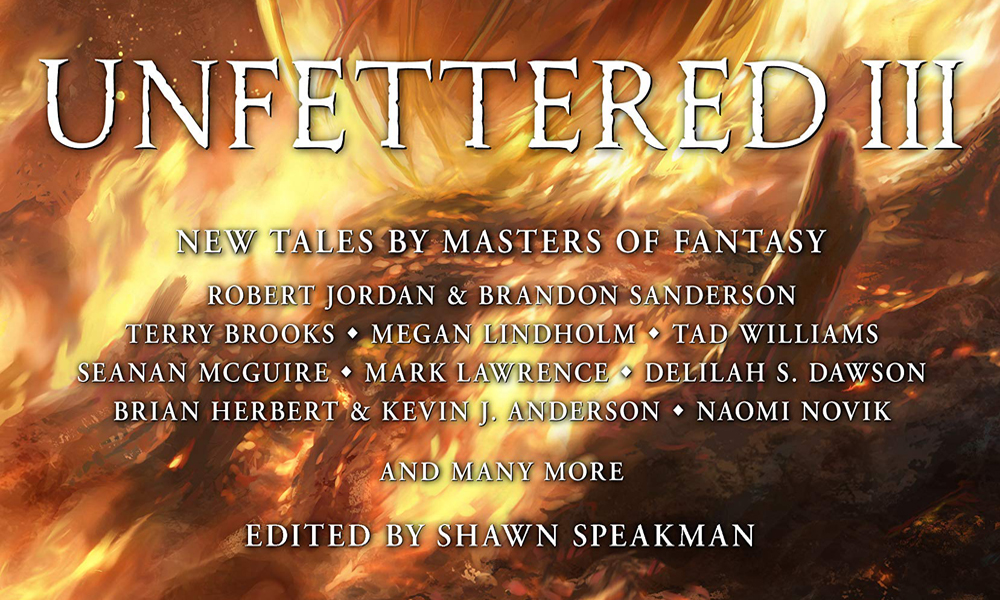 As someone wanting to fill in the gaps in her knowledge of fantasy literature, I was excited to read this third 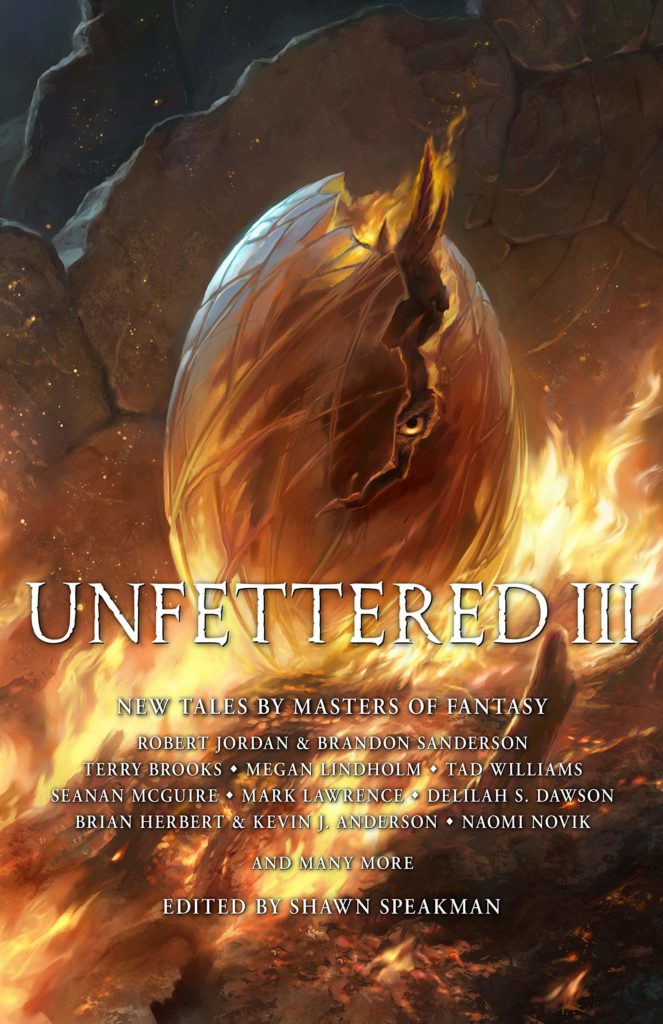 installment in Shawn Speakman’s anthology series, Unfettered 3. It includes such greats as Brandon Sanderson, Tad Williams, and Lev Grossman – writers famous for their sweeping worlds and book series. In fact, I would say that most of the writers in this anthology specialize in writing the series; and as such, many of the pieces are vignettes or chapters from longer works.

I think this fact—that many of the pieces are inspired or originate from longer works—helped some of the stories, like in Ramon Terrell’s “The Spectral Sword,” where he crafted a new tale that exists prior to the beginning of his World of Broken Age series. He explores an ethereal interaction between Shinobu, a khazira creature, and a sentient sword without bogging the story down with too much set-up or explanation. Likewise, in Terry Brooks’ “Allanon’s Quest,” we get to hang out with everyone’s favorite Druid and probably one of the best characters ever created: Allanon. It’s a nice treat to see Brooks’ work posthumously published in an anthology comprised of contemporary writers, and it was a fun one to read.

But in other cases, the cut-from-longer-works approach hurt the story. An example of it not working out so great in my opinion is Brian Herbert and Kevin J. Anderson’s contribution: “Blood of the Sardauker.” If you don’t already know you Dune lore by heart (or haven’t brushed up on it since high school), you’re going to be lost from the start. There’s simply too much world-building required to appreciate the various alliances and how they fit in the web of the war. I was also turned off by the sheer amount of exposition and telling taking place (an effort to catch up the reader on backstory) instead of in-scene action. I’m sure if I was knee-deep in Dune, I’d love it, though.

An interesting stand-alone tale is Megan Lindholm’s “Second Chances,” which involves a reality TV show crew dealing with the presence of ghosts on set. The story begins with wonderful intrigue on who and what the ghosts want, but as soon as we find out, things start to lose steam. It’s fundamentally a kind of revenge/redemption tale, which are always great, but this one ends with the ghosts confronting their “demons” and talking it out. It left me wanting more, but Lindholm is clearly a gifted writer. I would definitely read more from her.

One of my favorites from the collection is Naomi Novik’s stand-alone story, “Seven,” about a fantastical city that displays seven statues at its gates. These statues are made from a special white clay and serve as warnings when terrible storms are about to rage. Wind blows through the statues and makes them sing, and when the winds are too fierce, the statues instead scream. The story is about Kath, a clay-shaper, commissioned to replace a damaged statue. It’s a very quiet story, a poetic one, about the art of simple design, simple life, and simple desires. Much more is happening in the story than first meets the eye, which is my favorite kind of tale. It’s almost a kind of meditation to read it. I need to sit with it again, to read it again, and learn more of what the story means. I look forward to that.

I think this is a wonderful anthology to pick up because it has a sampling of at least 28 authors that all have works published and can be found on bookshelves. If you want to try out new authors, Unfettered 3 is an excellent way to discover them. It’s also a nice way to re-discover old favorites.