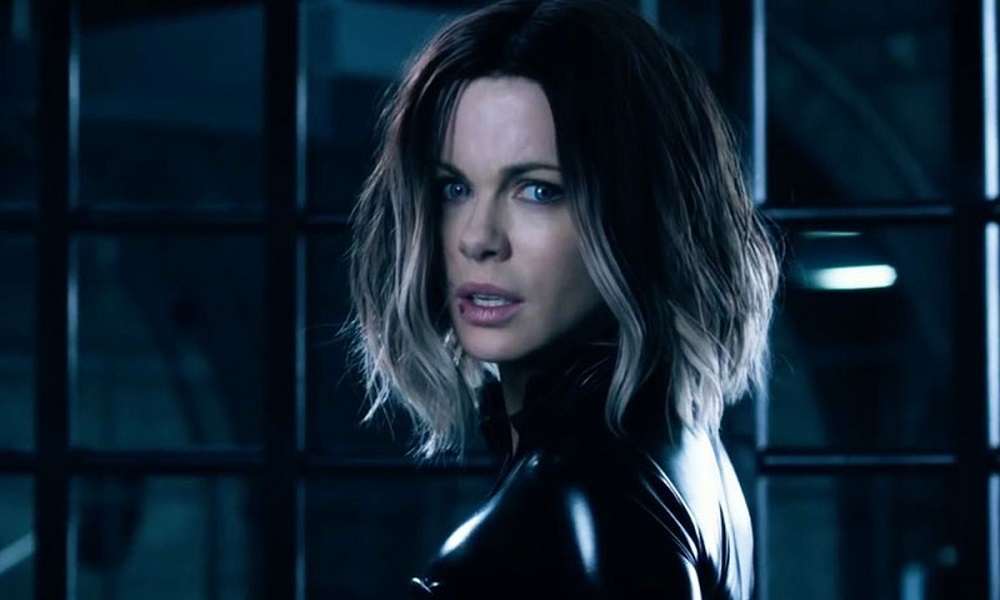 I’ve always approached the Underworld movies as guilty pleasures at best, and I’m betting most of its fans feel the same way. The franchise scored a coup with Kate Beckinsale in the lead: an actor WAY better than her material who clearly still gets a kick out of playing the action heroine. The Underworld series wore out its expiration date quite some time ago, but nevertheless it endures and – with the bar set very, very, VERY low for the fifth outing – I can’t say the “pleasure” has worn off of the “guilty” just yet.

It’s ridiculous, of course: an increasingly convoluted Gothic universe heartily cribbed from Anne Rice and Vampire: The Masquerade in which gorgeous undead who shop at the My First Bondage Dungeon section of Hot Topic do endless battle with a race of werewolves who trend significantly scruffier, but enjoy posing and brooding just as much as their bloodsucking foes do. Sorting it all out proves quite the task for laymen, or even for fans who want to forget about the moribund fourth entry in the franchise.

Luckily, “plot” is not the purpose of the exercise. Watching Beckinsale stride through the scenery in shiny latex while pummeling anyone who gets in her way remains the best (and sometimes only) selling point. She’s on the run as the movie opens because reasons, and her daughter – some manner of Chosen One hybrid – sits in hiding. Then her former vampire compatriots show up with an offer of truce that certainly doesn’t involve a double-cross of some sort, and off we go.

Again, it’s not exactly Nosferatu, but it holds a certain earthy charm for those of a certain type. The movie belongs in the PG-13 realm of the Twilight movies, but considering how truly awful that series is, Underworld at least has the temerity to show the consequences of eternal life. Beckinsale’s heroine Selene makes a good sounding board for that: reflecting her tragedy gently, to be sure, and lacking the (*ahem*) bite of more substantive vampire stories, but certainly adequate for those who don’t want to spend two hours listening to creatures of the night bemoan their lot.

That’s part of her secret weapon: she’s a figure of action in a world dominated by plotting and brooding, a shooter in a universe of schemers. She avoided decadence and decay by having and job and being really good at it, and when the Machiavellian threads of her sometime compatriots close tight, she basically just shoots her way out. The trick works surprisingly well, provided you don’t expect too much of it, and with Beckinsale showing more interest in the proceedings than she has in some time, they’re got a decent straw stirring the drink.

Furthermore, production values remain quite high for a film that barely saw the inside of theaters, and director Anna Foster gives it all a properly gloomy sheen. The action remains energetic and upbeat, and the presence of veteran stalwarts like Charles Dance ensures that the often-ponderous dialogue is delivered with suitable Hammer-esque flair.

In this context, that’s enough to satisfy fans of the series, who have stuck with it long enough to know exactly what to expect. I’d be hard-pressed to defend the film to anyone else, but I confess finishing my screening with a little smile on my face and wondering if there might be more. Not necessarily a fact to be proud of, but certainly one worth noting. The Underworld series as always pulp, even at the best of times. That’s how you need to enjoy it, and doing otherwise is an exercise in folly. But with vampires out of vogue and fans of the genre eager for a little respite, you could do a lot worse. With this franchise, we’ll take it and be happy.