Horror tends to be the most potent when it is either the primal terror of the unknown, fear for the loss of something, or fear by proxy for the situation of someone else in danger because of a realistic scenario.
Trespassers has none of these things. 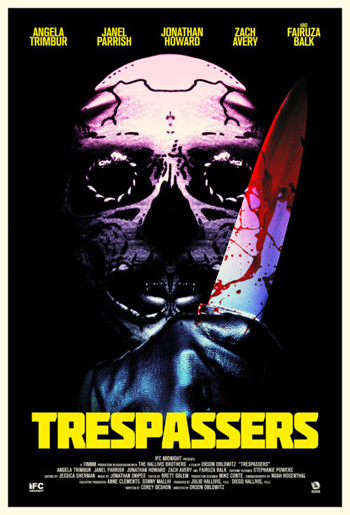 Before the opening credits we already know the extent of the threat and the motive as well as get a good long look at the enemy. Fear for loss is difficult to muster when every single potential victim is an unlikable hedonistic self-absorbed walking trope. Fear by proxy is strained because the dialogue at least to my ears felt very phony and some characters exist to essentially be morally bankrupt paper tigers to display a ham-fisted cautionary tale. You’ll get this point within sixty seconds of the introduction of one particular over-actor, but that point will be hammered flat for every other scene he exists in. So we’re stuck in a claustrophobic house with people who are unlikable when they’re sober, intolerable when they’re drunk or high.

The women are supposed to be the focus clearly as protagonists but most of what they do is hyperventilate and scream. One character is so hilariously overwrought he could be replaced by a guy in a black cloak with a mustache and you’d hardly notice any difference.

Also the hyper stylization doesn’t exactly make the proceedings feel any more realistic. There’s been a lot of talk about the squeamish needing to avoid this film. By rights there’s a lot of gore and violence, but it’s so hilariously over the top and most are either digital effects or distressingly cheap looking practicals. Old hands of the splatter genre might end up chuckling at the deaths instead of squirming.
There’s nothing frightening about people you struggle to care about being menaced by one-dimensional baddies. Even the ending you’ve seen before.

On a positive note the music is atmospheric and catchy, the cinematography is polished and interesting at it’s best (jerky close-ups can induce nausea) and there’s some love for the classics show here with red block letters evoking horror films of the seventies and bright garish lights paying homage to giallo Italian films.

But the issue lies with the fact that the films Trespassers tips its hat to outshine it in every regard, from writing too directing to brutality. There is nothing here to add to the genre apart from a couple actors having a vacation and a talented director showing through the cracks of bad writing and a grab bag of horror triviality. You want to see a better version of Trespassers, watch practically any other horror film.