Tremors: A Cold Day in Hell is the 6th film in the long-running franchise about the giant, carnivorous worms that began back in 1990. And while it might not be going strong it is still going, so there is that. Once again back for 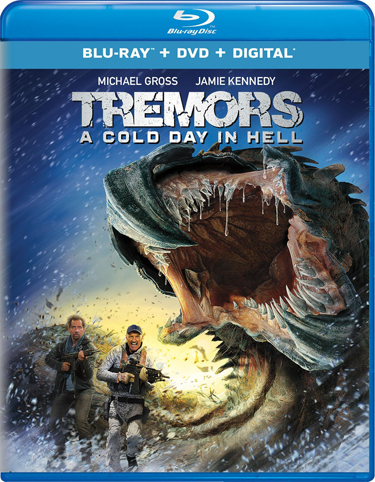 another go is Michael Gross as survivalist and anti-government gun enthusiast, Burt Gummer. Also returning is Jamie Kennedy as Travis Welker, whom we discovered was Burt’s illegitimate son in the previous entry.

Burt is back in the town of Perfection, NV, running Walter Chang’s general store. Burt receives a call from Dr. Rita Sims who is part of a research team working in far Northern Canada. Sims believes that the Graboids (the affectionate name of the worms) may be behind the recent deaths to several team members. Burt is skeptical since the worms have only been found in warm climates but he and Travis set off to investigate.

At the facility he meets a young Graboid hunter named Valerie McKee who turns out to be the now adult daughter of Valentine McKee (the Kevin Bacon character from the first Tremors film). Burt and Travis soon find out that not only are there several Graboids in the area but also the flying “Ass Blaster” versions. On top of that they also have to contend with a secret government black-ops group who is trying to weaponize the worms.

While none of the Tremors sequels (nor the one prequel) have ever been able to hold a candle to the original, A Cold Day in Hell is definitely one to miss. This sleep-inducing bore fest cannot even be saved by Burt’s over-the-top arrogance and crankiness. The sub-pots involving the secret government agency and Burt’s becoming infected by a parasite of the worm mucks up what should be mindless worm-shooting fun.

The fun wise-cracking that has been one of the key features of previous films is poorly written and forced. The supporting characters add very little and are disposable in every way. The visual effects are the poorest seen so far in the franchise. The Burt Gummer character is still the main reason to watch these films but with Michael Gross now into his 70s one can only hope there is a better film left to send his character off to a gun rack in the sunset because it definitely was not this one.

The Making of Tremors: A Cold Day in Hell (14:06) is a 6-part look at the film’s production, featuring interviews with director Don Michael Paul, and the cast.

Anatomy of a Scene (4:01) takes a look at one of the film’s notable scenes including its digital effects, and stuntwork.

Inside Chang’s Market (2:47) explores the set constructed to recreate the location from the original film.