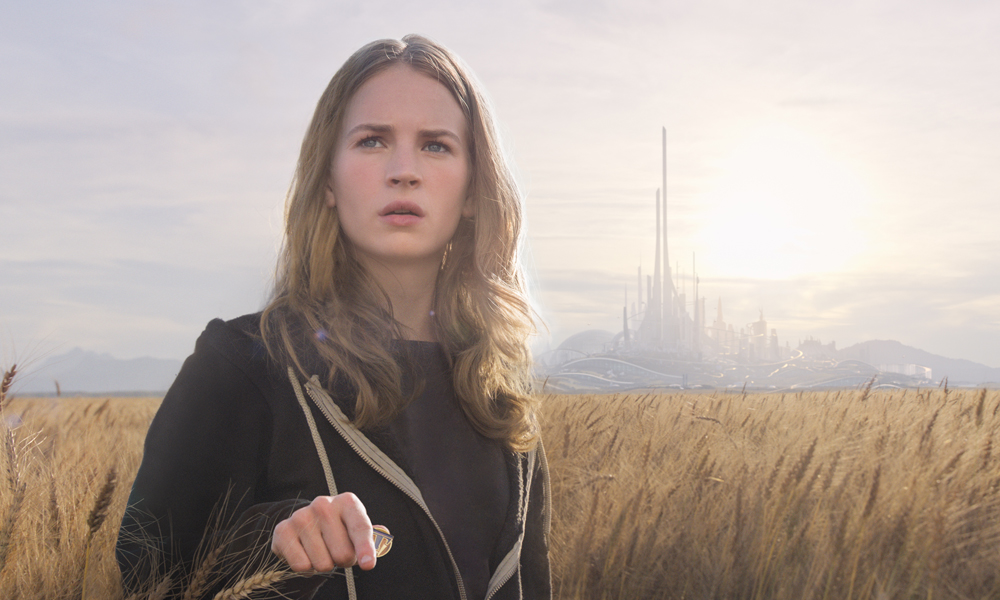 Pirates of the Caribbean (2003), The Haunted Mansion (2003), and, to a much lesser extent, the Tower of Terror (1997) are all Disney rides that have been re-imagined into movies. Now Brad Bird (The Incredibles) and Damon Lindelof (Lost) have taken a whole section of The Magic Kingdom and made it the backdrop in its own feature film. Is this just another marketing tie-in with a prefabricated attraction to draw more tourists? Or, is this actually a film that can stand on its own?

Where Tomorrowland does draw from is the formula of Disney films of the past. There is a youthful heroine, Casey (Britt Robertson), the dreamer, who will never lose hope. We also have a mysterious stranger, Athena (Raffey Cassidy), who wants Casey and the audience to earn their adventure. Finally, in a classic Disney staple, we have the curmudgeon, Frank (George Clooney), who needs to believe and have hope all over again. Their adventure and quest is to find and save Tomorrowland.

Casey is the one character you wouldn’t believe could be such an optimist. Her mother is gone, her father (played by Tim McGraw) is about to lose his job, and yet she still believes in possibilities. Bird and Lindelof certainly remind the audience how much hope we have lost for our world. With our climate spinning out of control, war on every continent, and our natural resources dwindling, what can we do?

Casey, however, believes that something can still be done and, unbeknownst to her, is given a very special pin. The pin unlocks a portal that takes her to the miraculous Tomorrowland, where she sees all her hopes and dreams come true in vivid colors and technology. However, Casey’s time in her special world runs out and thus begins her quest to return. She immediately looks in the wrong place for answers, the internet. After an overindulgent (but still cool) pop culture explosion that lands Casey in some trouble, she is saved by Athena, a mysterious little girl. Together, they set out to find the one person on Earth who can return them to Tomorrowland, Frank.

The trap of Tomorrowland is that it seems to have all the answers. Everything has worked out and a brilliant future lies on the horizon. Naturally, Casey feels drawn to this place and destined to be there. After all, Tomorrowland attracts dreamers. So why isn’t Frank there? The film actually opens with his backstory and, for the sake of no spoilers, I will not go into the details. Frank now lives in seclusion, while still ever mindful of what is going on in Tomorrowland. When he learns that Casey may hold the key to saving it, he agrees to take her there.

Their adventure is a great technological chase supplied with creepy robots, whimsical contraptions, and a bit of steampunk thrown in for good measure. Bird ignores the sci-fi technobabble and even makes it a bit of a running joke between two of the characters. He lets us have the magic without needing to explain it.

This brings us to our first point of why this film works on so many levels. Where is the wonder, the magic, and the awe in cinema, today? Tomorrowland supplies these things in multitudes. The second and most important point about the film is its dream of the future where anything is possible. We all seem to have lost our hope for a better tomorrow because it’s easier to give up than to work for it, which is the same reality our characters must face. The key is to feel inspired instead of defeated. Tomorrowland supplies all the right feelings.

This film will not be for everyone. We already have tons of cinema that provides a dystopia for our future. Tomorrowland, however, reminds us that the future is something we all have to work for. You will leave this Disney film with a great lesson and a great sense of hope. With that final thought, I’ll give you one more: People say, “They don’t make them like they used to”. Apparently they still do. All you have to do is see Tomorrowland.