The original Tomb Raider video game wasn’t just a good game but was the kind of game that made you want to run out an by a Playstation console. Its combination of platform gaming, puzzle solving, shoot-em-up action as well as a charismatic lead character led to many sequels, a toy line, and two big screen films starring Angelina Jolie which achieved moderate success. 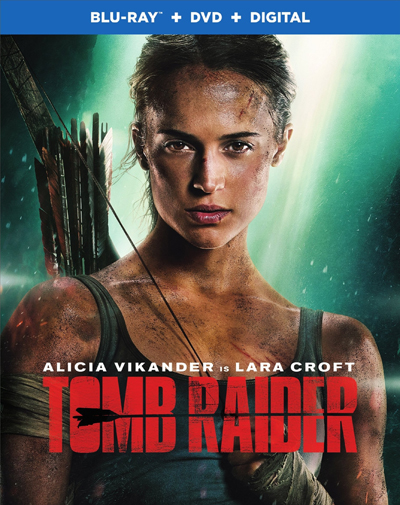 Warner Bros. is now rebooting the franchise with a prequel with Alicia Vikander as Lara Croft, and takes us back to Lara’s first adventure. The film suffers from early missteps with a completely irrelevant and overlong origin story. A young Lara Croft, daughter of the wealthy Richard Croft (West), is barely eking out an existence. She refuses to accept her inheritance as doing so means she has to sign papers to declare her father legally dead after his disappearance 8 years earlier. This results in some silly feminist girl power nonsense with Lara trying to prove her mettle. We played the games…Lara needs to prove nothing!

Lara discovers her father’s secret research which includes a video from him warning her to destroy the information. She learns he was looking for the hidden temple of an ancient Japanese sorceress queen named Himiko, who was so evil that her own subjects buried her in a hidden tomb on a remote Pacific Island called Yamatai.

Lara recruits Lu Ren, captain of the ship Endurance, to sail into the Devil’s Sea and the island of Yamatai. However, Lara soon discovers that there are others who are after the supernatural power of Himiko to exploit for their own ends. A shadowy organization called Trinity is already in the midst of digging to find the tomb, led by Mathias Vogel (Goggins). Lara must not only try to locate her missing father but contend with Vogel, and his band of mercenaries.

Tomb Raider takes far too long to get to any actual tomb raiding. Those who played the games know that they threw you right into the action and the story played out over the course of the game. While we can accept the fact that some background narrative is necessary, Norwegian Director Roar Uthaug drags his feet getting there. It takes nearly two-thirds of the way through the film before we start to see the elements which have made the video game series so popular.

That said, once we get there it is worth the wait…perilous jumps, booby-trapped rooms, frenetic gun battles capture the essence of the game. I felt the phantom aching of my thumbs from button mashing! When we get to the last third of the film it is better than anything in the two Jolie outings, by far. This is Uthaug’s first big Hollywood film. He directed the disaster film “The Wave” and while it was quite good it had about 1/15th the budget of Tomb Raider. In the hands of a more experienced Director this might have been a much bigger hit.

Alicia Vikander is vastly superior to Jolie. She’s genuine and believable in every facet of her performance. She demonstrates vulnerability and ingenuity that we didn’t see in the earlier Tomb Raider films. It did well enough at the box office that a sequel is almost a certainty.

Tomb Raider has too many deficiencies to give it more than a moderate score but bubbling underneath the surface of a mundane script and pedestrian direction is a hit franchise trying to break out.

Croft Training (6:06) – Enter the gym with Alicia Vikander as she prepares for the most physically demanding role of Lara Croft.

Breaking Down the Rapids (5:34) – Director Roar Uthaug and other members of the cast and crew break down the film’s most exciting action set piece.

Lara Croft: Evolution of an Icon (9:53) – Explore the Tomb Raider history from video games to movies and discover how Lara Croft became one of the most popular and successful female characters of all time.