At the start of the book, the authors give respect and admiration nods to Robert E. Howard, Karl Edward 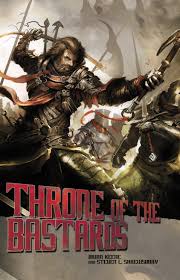 Wagner, Manly Wade Wellman, Clark Ashton Smith, H.P. Lovecraft and Edgar Rice Burroughs. With a roll call like that you better have something spectacular or at least some good old fashioned yarn spinning entertainment up your sleeve. On both those counts, it’s sad to say that THRONE OF THE BASTARDS doesn’t quite deliver. At the beginning of the book, we learn that our gnarly, aged barbarian protagonist, Rogan, was cut from his mother’s womb by his father. At various points in his career he has been a buccaneer, a mercenary, and a general before becoming the king of Albion by cutting off the head of the former monarch. Now an aged, embittered veteran who has abdicated the throne to go adventuring, he has come back to wrest the crown from his bastard heirs who have been up to no good in his absence. We get treated to a whole host of land names from classical myth and legend. Albion, Pryten, Zembabwei, all thrown into a great melting pot in a time that we are told existed before the Great Flood. What sets this apart from the classic pulp era writers they claim to pay homage to is the very contemporary style of writing in vogue right now thanks to the popularity of George R.R. Martin, Joe Abercombie, and the whole “grim-dark” sub-genre of fantasy fiction that has grown up in their wake.

Essentially, what we have here is Keene and Shrewsbury dragging Conan up by his smelly war-boots into the 21st century. But whereas Howard had a burning, hard hitting prose that cut through your imagination with a bloody swath, here by comparison we have something too dialogue heavy, self aware and flatly written. Instead of the pulp sword-&-sorcery greats it claims to admire, THRONE OF THE BASTARDS reads more like A GAME OF THRONES if it had been written by David Gemmell in a particularly foul mood. There is profanity by the bucket load. The characters split up expletives in order to fit another one in. I had trouble with some of the similes. “Then strike, Rogan,” Javan said simply, like a butler offering tea and biscuits. That anachronistic line yanked me straight out of the story during a fight scene I was already having trouble digesting. I felt at times that the authors were trying too hard. Instead of concentrating on making their peers proud with some good ole fashioned story telling, they were more concerned with point scoring references instead. Hence we get name drops to “the sons of Cthulhu”, “Dagon”, and at one point, during one of the most impassioned speeches in the book, Rogan even speaks of “barbarism being the natural state of mankind.” All this fanboy service actually comes across quite unnecessary and lazy.

However, despite my criticism, THRONE OF THE BASTARDS is not a terrible book. Indeed, after a slow first half, the action and the fight scenes make for some gripping reading. The horror elements, the strongest aspect, are the overall highlight. There are some altogether unwholesomely gruesome scenes to keep even the most ghoulish reader happy. There are humorous touches, too, as when, during a parley with Rogan’s bastard son, Rogan’s friend and ally, Thyssen, debates with him whether or not he should sell out his friend to the enemy in exchange for a nice comfortable life. There are good moments but, as this is a relatively short novel, it all comes a little too late in the day to make it pay off.