Premiering on NBC in September 1960, Thriller was a weekly anthology series hosted by horror icon Boris Karloff. The complete, 67 episode series is now available for the first time on DVD giving horror fans a chance to see the series for the first time in decades. When the show debuted, its plots were mainly centered on crime suspense tales but that didn’t last for long. Knowing that they needed to up their game, the producers of the show started doing primarily horror tales, often written or based upon stories by such legends as Robert Bloch and Richard Matheson.

The first horror-themed episode was shown just before Halloween 1960 and was called “The Purple Room”. A playboy (Rip Torn) inherits a family estate but the will calls for him to spend a night in the reportedly haunted house before he can claim the fortune. Eagle-eyed viewers will recognize the house as the very same one used in the classic film Psycho. With this episode, Thriller was truly off and running with episodes which would feature up and coming Hollywood talent such as William Shatner, Robert Vaughn, Leslie Nielsen, Richard Chamberlain, Mary Tyler Moore, Ursula Andress, Marion Ross, Elizabeth Montgomery, and many more…all future major TV and film stars. 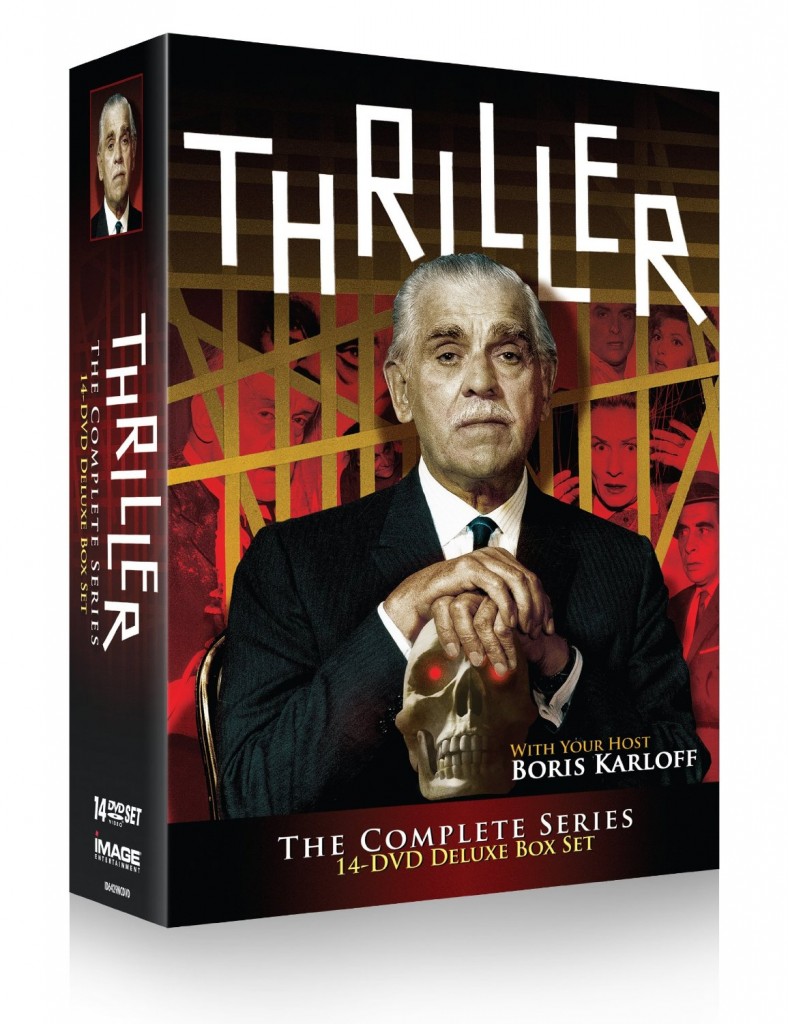 Thriller was filmed in gorgeous black and white, which was a perfect complement to its dark and gritty tales. Karloff was in his early 70s by this time but still an imposing figure as he introduced each episode similar to what Rod Serling did with The Twilight Zone. He set the tone for what was to follow and then, as now, Thriller is a great series to watch with all the lights out.

“The Cheaters” is about a owner of a salvage business who finds a pair of glasses with a unique property. They allow him to see people as they really are and to hear their dark thoughts. He discovers that his wife and his young assistant are conspiring to murder him. This episode is unique in that it follows the magical glasses as they pass from owner to owner.

“Hay-Fork and Bell-Hook” has one of the best openings in Thriller history as a frightened farmer relates a tale of witchcraft and a monstrous horror that is terrifying his local village. When a Scotland Yard investigator arrives he finds himself running up against the villager’s rural superstitions. This episode co-stars Alan Napier who played Alfred the Butler on the 1960’s Batman TV series. Napier would so-star in a handful of Thriller episodes.

While Karloff’s main function was as the show’s host, he also was called on to star occasionally as in “The Prediction” where he plays a struggling magician and psychic whose predictions suddenly start coming true.

As mentioned several of the episodes were written by Robert Bloch or based on his stories. These included one of Bloch’s most famous stories, “Yours Truly, Jack the Ripper”. In this tale, Jack is still alive and well in 1960 and killing victims to maintain his immortality. Another episode based on a Bloch story is “The Devil’s Ticket” in which a struggling artist discovers that the Devil is the proprietor of the local pawnshop, and he works out a deal to exchange his own soul for a few months of fame and fortune. William Shatner appears in “The Grim Reaper” another Bloch-based story about a painting that brings death to anyone that owns it.

But perhaps the most famous episode in Thriller history was “Pigeons from Hell” which was based on the short story by Conan the Barbarian creator, Robert E. Howard. In this tale, car trouble forces two brothers to spend the night in an abandoned mansion they stumble upon in Louisiana; a mansion where thousands of pigeons perch and an even more terrifying evil lurks inside. Pigeons from Hell is one of the greatest short horror stories of all time and this was a fantastic adaptation.

Thriller is a show that is perfect for DVD. After fifty years it has been saved from dusty vaults to be viewed by new generations of horror fans. Superb writing and exceptional casting was a staple of the show. And the show’s transfer to DVD is fantastic. The sound and video quality are first rate. With the exception of The Twilight Zone, Thriller is the best anthology TV show…ever!

It would have been perfectly wonderful if just the show was released on DVD but the producers of the DVD have given fans a bounty of extras. Most importantly is that 27 of the episodes have an audio commentary track featuring some of the actual cast and crew members who worked on the show, as well as noted horror historians David Schow and Gary Gerani. It’s simply wonderful to hear some of the stars relate their stories about working on the show and with Karloff.