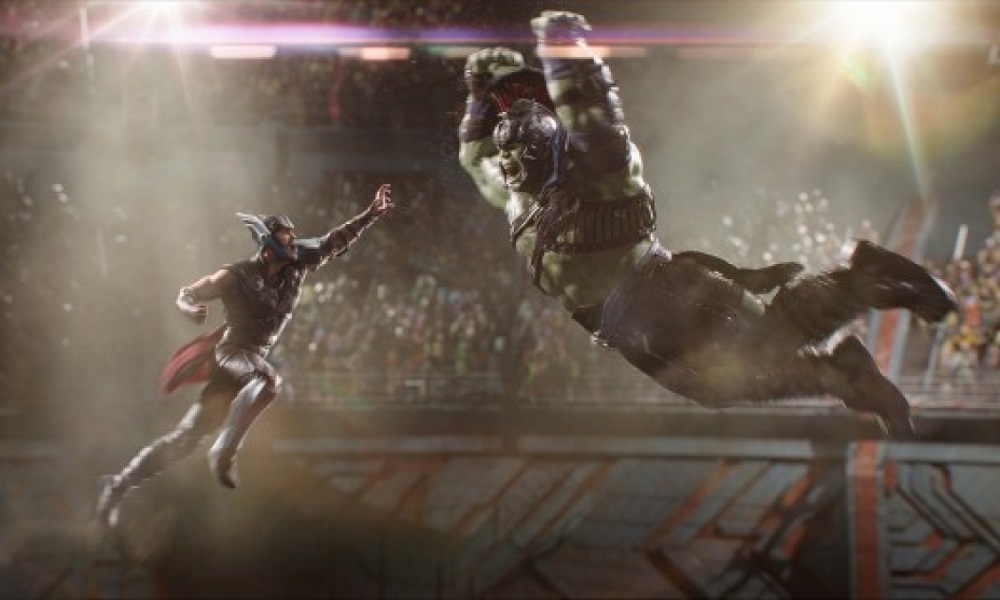 Good news everyone! That Hulk dick joke we ordered has arrived!

It arrives unexpectedly, as a good dick joke should, and demonstrates the kind of class-clown notion that director Taika Waititi brings to the third Thor movie. Most fans feel that Thor constitutes the runt of the MCU’s Big Three: that Robert Downey’s Iron Man and Chris Evans Captain America carry more heft in their respective solo adventures. Thor (Chris Hemsworth, as always) struggles a little more in part because he’s more mythic figure than superhero. Squaring that circle took time and makes his films more of an acquired taste. The original remains one of my favorites in the MCU and I maintain that the second movie, The Dark World, is better than its reputation suggests (though it’s certainly a tier or two down from the franchise’s high points).

Ragnarok won’t convince anyone to alter those opinions, though it finds a freedom in lowered expectations that serve it extremely well. Waititi finds the sweet spot where he can treat it all as a glorious lark without changing the stakes involved or reducing the overall seriousness of the characters and their journey.

More importantly, he has the freedom to play for keeps. Anyone who’s seen the trailers knows that Thor loses his hammer in this one: destroyed by the villain du jour Hela (a marvelous Cate Blanchett) in her bid to take over Asgard. But it goes beyond that. People die in this one. Reigns end. Circumstances shift in fundamental ways, and Waititi has the courage to follow through with their implications.

Such boldness certainly wasn’t on display in The Dark World, and while one hesitates to read too much into it – this is a boilerplate superhero adventure in some ways – it does reflect the MCU’s desire to grow and evolve instead of beating the formula into the ground. None of the franchises increasingly vast array of heroes can rest on their laurels if they want to stick around. Waititi’s handles those changes with surprising confidence, and keeps us giggling at the borderline silliness of it all without skimping on either an entertaining action or the bigger plans of the MCU.

Blanchett’s presence helps that a great deal. In Loki (Tom Hiddleston), the Thor movies gave the MCU a villain it desperately needed. Blanchett constitutes a terrific addition: Odin’s eldest daughter, returned from exile and seething with resentment at denial of her rightful throne. The Thor movies always benefitted from a whiff of the Shakespearean, and Blanchett find the rage and tragedy in her character without disrupting the film’s upbeat and friendly tone.

That provides a lot of room for dick jokes to thrive, and with Thor soon cast off to the far side of the galaxy, Hela can work her twisted will at leisure while baby brother slowly fights he way back. The set-up is loads of fun and Waititi provides a kind of gallows absurdity that we’ve not seen in the MCU before. Everything is lethal and yet reasonably ridiculous, which lets the film deal with real consequences without losing the feeling that it’s all in grand fun.

Sometimes, those plans end up entangling it more than they should, though those are expected from the franchise at this point. Benedict Cumberbatch’s promised cameo as Dr. Strange feels fun but pointless, and the usual post-credits Easter Eggs prove more pro forma than inspired. And despite the proper gravitas in the right places, Thor: Ragnarok still feels like a goof, interested in entertaining first and worrying about big-picture issues second. That makes those big picture issues feel more forced than they should, and undercuts the film’s periodic need to drop the jokes and remind us of the more significant stakes in play.

On the other hand, its slight nature gives some of the smaller characters a chance to shine… and shine they do. The Hulk, for example, finally talks for extended periods of time, and his presence here as Thor’s reluctant right hand gives him a chance to serve as something other than a barely-controlled asset. Then there’s Tessa Thompson’s Valkyrie: a surprisingly nuanced character who helps give Asgard both a tragic history and a chance at redemption. She’s essentially a last knight figure, who watched her compatriots fall and now wants to either escape the pain or avenge the memory without the first idea how to do it. Hemsworth’s hero is as charming as ever, but its Thompson who gives the film its emotional energy.

Throw in a few other surprises and Thor: Ragnarok becomes a delightful curtain call to the similarly breezy Guardians of the Galaxy Vol. 2 earlier this year. More importantly, it reflects Waititi’s sensibilities and quirky sense of humor. The auteurial touch threatened the MCU with stagnation, and Waititi’s work here indicates that producer Kevin Feige and the other powers-that-be have taken those lessons to heart. I’ve always considered the Thor films underrated – particularly the first one – and in the final equation, I think one may suffer the same unfair dismissal. On the other hand, few Marvel movies are as much fun as this one… and if we can’t have fun with these figures, there’s no sense expecting anything more.