Thor: Ragnarok (2017): A Superhero Film That Turns The Genre On Its Head 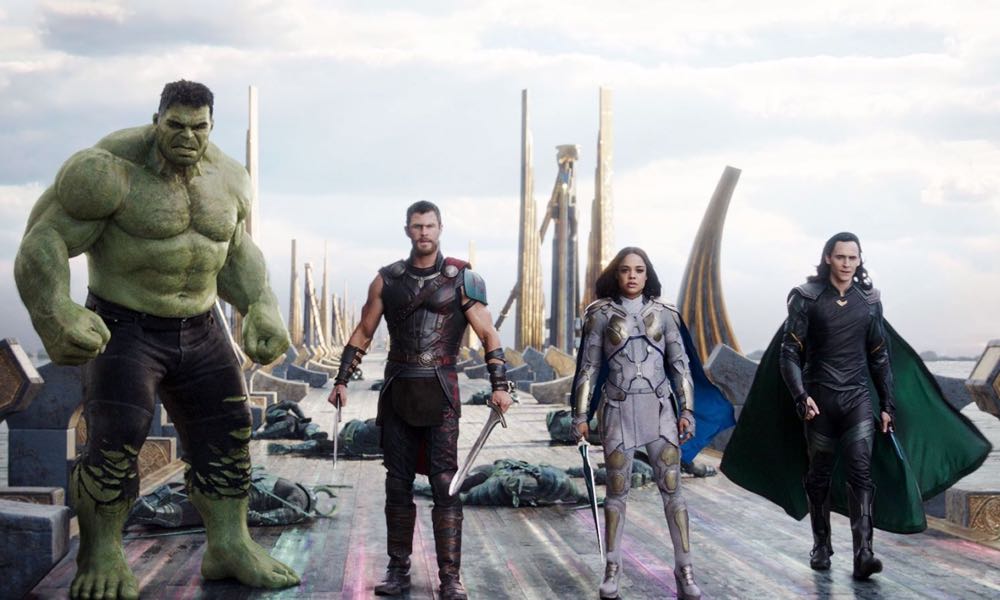 The Mandalorian and Star Trek Discovery, two of my current favorite TV series, both just wrapped up their seasons recently, and, despite the recent bumper crop of new content, I found myself momentarily at a loss for some great genre entertainment. I knew I wanted something with a great, entertaining story, preferably from the school of high adventure with plenty of action, and of course, fun. What I settled on fits that description perfectly, and what I discovered upon watching it again is  Thor: Ragnarok is a delightful blend of humor and adventure, and far from being more of the same (depictions of characters that solve every problem by punching each other or somebody else in the face), in many ways, this film turns the entire genre on its head and in the process, became a remarkably excellent genre film.

Thor: Ragnarok is a wonderfully entertaining film from beginning to end while narratively taking us on a humor-laced, adventure-filled odyssey. This film somehow manages to perfectly balance the disparate elements of high drama and a very witty sub-text of self-awareness. Thor: Ragnarok somehow manages to portray a series of grim events and somehow keep a lighthearted tone throughout the film. The film parades out a mesmerizing series of strange and fascinating characters and events against a backdrop of a high-stakes game of life and death that never loses its appeal and never disappoints.

Not familiar with this title? Thor: Ragnarok is a 2017 American superhero film based on the Marvel Comics character Thor. It is the sequel to Thor (2011) and Thor: The Dark World (2013) and the 17th film in the Marvel Cinematic Universe (MCU). Taika Waititi directed the film from a screenplay by Eric Pearson and Craig Kyle and Christopher Yost’s writing team. The film stars Chris Hemsworth as Thor alongside Tom Hiddleston, Cate Blanchett, Idris Elba, Jeff Goldblum, Tessa Thompson, Karl Urban, Mark Ruffalo, and Anthony Hopkins. In Thor: Ragnarok, Thor must escape the alien planet Sakaar in time to save Asgard from Hela and the impending Ragnarök. The film’s excellent dialogue deserves mention, and the back and forth between the film’s characters add a lot to the film overall. The entire cast is at the top of its game, with a suitably menacing Blanchett portraying a very pissed-offed Hela, an immensely amusing Mark Ruffalo, and Karl Urban as clueless, dim-witted Skurge, along with Taika Waititi as not very bright, but kindhearted Korg, As often happens in excellent movies, the entire cast contributes to making this production great.

I have avoided writing articles on most mainstream comics-based movies, not because I don’t like them; I do. I have been a fan of comics practically my entire life and so appreciative that the stories of the artists and writers I have loved so much for such a long time are finally being brought to life in a quality manner to the big screen. The thing is, these stories, more or less, portray the classic struggle between good and evil, which, predictably, get resolved by characters using their powers or physical might to beat the crap out of their opponent, over and over again. At their core, in many ways, it’s like a lot of these stories are the same story. These stories collectively represent an archetype, what Joseph Campbell referred to as ‘the journey of the hero of a thousand faces.’Thor: Ragnarok toys with these same themes playfully and delightfully in a manner that works by simply changing our perspective of the film’s events.

For me, most films are mostly about the story, but in this film, even though the story is up to the task and delightful itself, the dialogue shines and is deserving of a mention.  It’s difficult to determine who this film’s star is really. It’s an honor that deserves to be shared by nearly the entire cast. Thor: Ragnarok is highly recommended, and I can’t wait to see the sequel, ‘Thor: Love And Thunder,’ also directed by Waititi and scheduled for release in 2022.