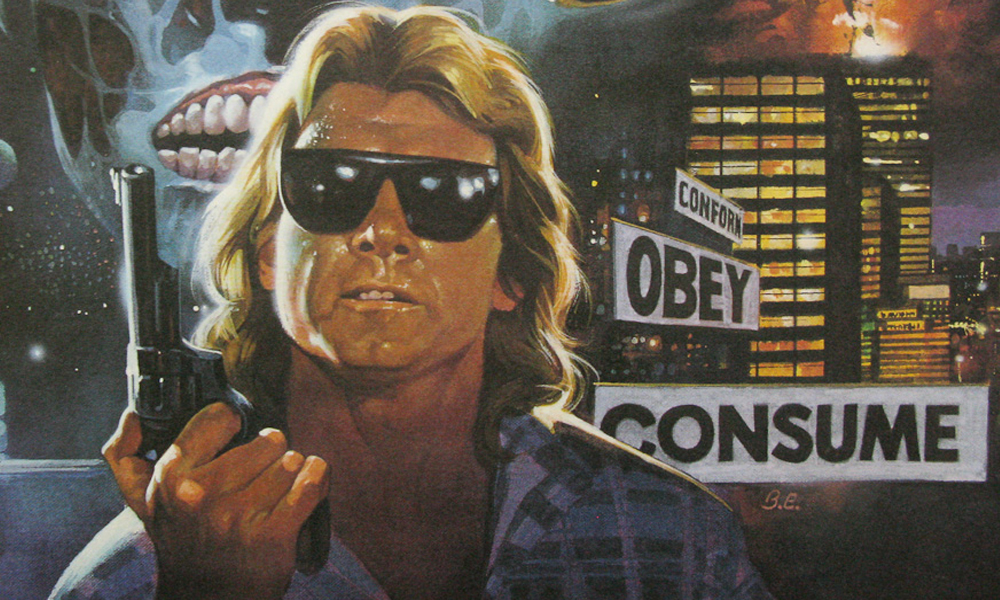 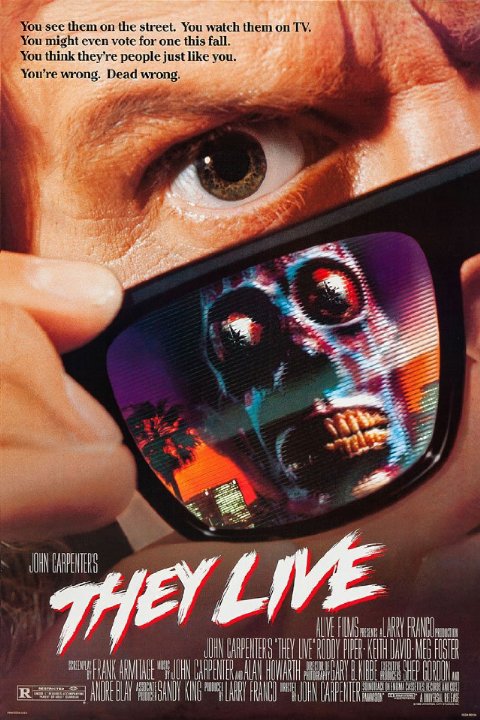 The first time I heard about They Live, it was from my best friend and his older brother. Somehow, their parents always took them to see badass rated R movies. This is how I heard about The Fly and Die Hard which, if you take note, are around the same time frame. I was at the awkward age where my parents were controlling what I was seeing at the theater, but cable was another story. When They Live finally did arrive on the small screen, I was enthralled. Here was Roddy Piper standing up to an alien threat. He wasn’t the bad guy Hulk Hogan made him out to be. He was fighting for the American Dream, just like Hulk. It was that 13 year old mind set that let me enjoy the film over and over again. John Carpenter’s They Live has become a cult classic. However, it is far from a perfect film or even a good one.

What I have always liked about They Live are the ideas behind it. Yes, the aliens are here, but how long have they been here? At 13 years of age, you start to buy into conspiracies really quickly. It is when you discover that there are two truths to the world: the one on the surface and the one nobody talks about. After watching the interview “Independent Thoughts” (on the special features) with Writer/Director John Carpenter, I was pleased to learn that he, too, thought there was more going on in society; not that aliens had taken over our government and economy, but that President Reagan’s Reganomics was a shame. It was Reagan’s way of keeping his friends rich and the middle class trapped. Here was a great way to address the problem, by making an allegoric tale about it. It also pleased me that he believed that real aliens are never going to be like Spielberg’s E.T. They’ll just be plain evil conquerors of men. Put all that together and you’ve got They Live.

They Live, itself, is filled with overblown, small budget action sequences that play well on cable, but deliver very little on a big screen. Roddy Piper may be the perfect everyday working man/ action hero, but he is not an actor; not in the sense his co-star, Keith David, is. In the original “EPK: The Making of They Live” Carpenter addresses how Roddy Piper improved his own one liners, thus adding to the character of John Nada. First of all, I have watched this for 24 years and never knew Roddy Piper’s character’s name. How did I miss that? For me, he was Roddy Piper in this situation. The one liners were just as crazy as anything he said in “Piper’s Pit” on the WWF. The same could be said about Hell Comes to Frog Town. Although, in that case, knew his name was Hell (see, it’s in the title).

Piper clearly plays two different men in the film. There is the concerned do-gooder who is just looking for his fair shake from America and also the half cocked mad man who picks up a gun and starts blowing aliens away. One could easily make a case that John Nada, the character, is crazy and this is all just a paranoid delusion. Maybe make Frank (Keith David) and Holly (Meg Foster) just characters in his mind and it would have been a great way to spin. However, this isn’t the case and all the film ends with is Roddy shooting a dinky pistol at a satellite dish which is too small to do all that it is doing. It even ends on a bad one liner and a middle finger to boot.

Then why do I keep coming back to They Live? The premise, as I said before, is a good idea. It may be one of the few films that I think should actually be remade. Carpenter had great ideas, but budgetary constraints and poor casting hinder the film. If anything, a film like They Live is more poignant now than ever before. Look at the world around us. It would explain a lot about what’s going on with our government and planet.

Shout! Factory, again, has delivered a Blu-ray that fans of the film want. The picture quality is stunning. Each make-up covered pock mark on Piper’s face is visible. Meg Foster’s eyes truly look like blue water in a Caribbean Sea. Even the aliens look great. Their other worldly appearance and low budget make-up is only heightened in 1080p. It makes them more unique than ever. The original “Making of” does supply a few great tidbits about the aliens and the actor that played the majority of them. If anything, it does supply you with Carpenter’s favorite type of hero.

What I have to call shenanigans on is the new box cover art that Shout! Factory commissioned for They Live. It is beyond terrible. It looks as if the artist was told to draw the characters for the side of the They Live Video arcade game. With all the great artists out there and iconic scenes to draw from, why this? Especially after all the fine pieces drawn for Halloween 2, Halloween 3, The Fun House, and Terror Train. It’s a good thing an instant cure is available as the original cover art is on the flip side.

Man vs. Aliens – An interview with Actor Keith David

Woman of Mystery – An interview with Actress Meg Foster

Watch, Look, Listen: The Sights & Sounds of “They Live” – A look at the visual style, stunts and music from the film with Director of Photography Gary B. Kibbe, Stunt

Original EPK: The Making of “They Live”

Never-Before-Seen Footage from the Commercials created for the film.

One thought on “They Live Collector’s Edition Blu-ray Review”