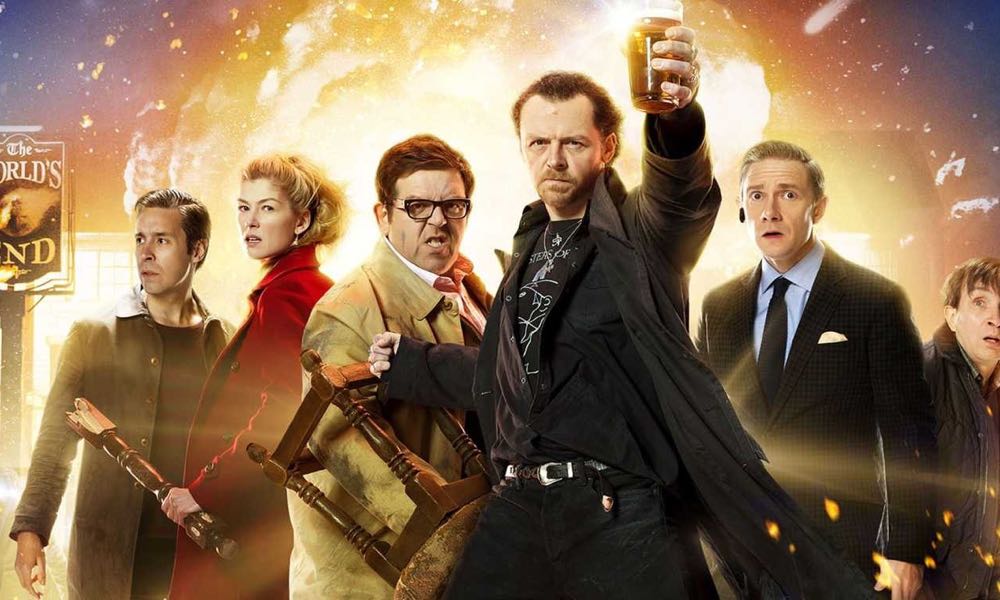 The World’s End begins as a film about friendship and advancing age and the feelings that accompany the loss of youth that is not as depressing as it may sound. The film’s narrative chronicles the events of a single evening and one man’s desperate attempt to escape the inexorable march of time. Not satisfied to embark on this journey alone, he manages to corral his old mates into reenacting a quest to complete a legendary unfinished pub crawl in a small town known as the golden mile in a desperate attempt to recapture his rapidly vanishing youth.

Sounds like the makings of a hilarious comedy, right? This film is not always a  whole lot of fun, but despite the sobering themes the film successfully tackles, it manages to be quite amusing in a thoroughly British way. This film is a deep dive into British everyday life and culture and meant for British sensibilities despite exploring universal themes.

Just as it reaches its most somber and dramatic point, the film shifts into something else entirely, The World’s End becomes an alien invasion story that is a tribute to the science fiction films of the fifties and sixties. It’s a story that has moments somewhat reminiscent of Village Of The Damned, and Attack Of The Body Snatchers and other early science fiction classics.

The World’s End has some classic fight scenes that are as amusing as they are brutally violent. The aliens, in this case, are robots that continue to function even after suffering damage such as being beheaded or other usually fatal injuries

The story’s elements suggest the film’s narrative can be taken metaphorically as well as at face value. The film characterizes the ‘benevolent’ aliens as only wanting what’s best for us humans, as they prepare us through conditioning for membership in what they refer to as the Network, an organization that is galactic in scale. Pegg, as lead protagonist Gary, delivers a brilliant but slurred because of drunkenness speech about being stubbornly uncooperative, irrational, and not giving a damn. In other words, what it means to be human. It’s a speech that is not only amusing but somehow makes sense in a perverse and thoroughly British manner

The film’s climax shifts the narrative a second time when a massive Electromagnetic pulse spells the end of civilization as we know it giving birth to a post-apocalyptic world that serves as the film’s epilogue.

The World’s End is an excellent, and amusing film with the look and feel of a low budget production that thoroughly strange, thoroughly British, and none the less, thoroughly enjoyable.