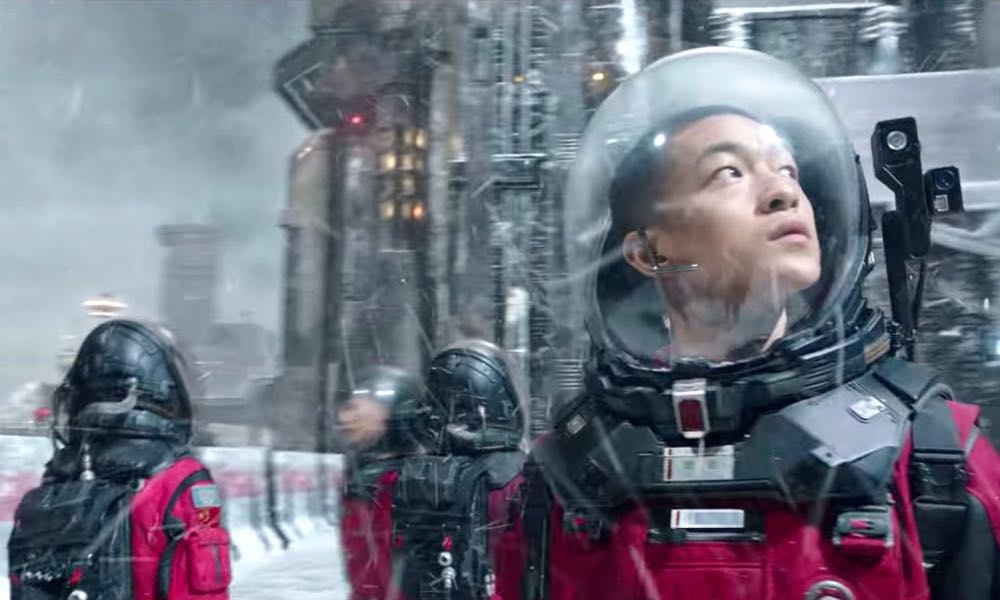 If you keep your eyes and ears open for news concerning genre productions for movies or TV like I do, You have been getting a lot of buzz about the Chinese science fiction epic called The Wandering Earth. An ambitious film about a plan for survival put in place by a newly unified humanity involving moving the planet earth out of orbit and moving it to a new home on a voyage through space that will take 2,500 years. That’s right; The story involves turning the entire planet into a spaceship to travel across the galaxy; what could go wrong?

Now it’s reported Netflix has bought rights to “The Wandering Earth,“ the smash hit film pitched as China’s first mainstream sci-fi movie. Adapted from a 2000 novella of the same name by the godfather of Chinese sci-fi, Liu Cixin, the film tells the story of people working together to save the planet from our aged, imploding sun by moving it with incredibly gigantic thrusters to another solar system.

The film is directed and written by Frant Gwo. It features an enjoyable cast including Qu Chuxiao, Li Guangjie, Ng Man-tat, and Zhao Jinmai, with a special appearance by Wu Jing.

I watched the film best I could A few nights ago, and despite all the talk of it being a mind-blowing visual feast for the eyes, it didn’t seem to warrant such a fuss based on the excellent quality copy I recently viewed. The CGI and special effects were sub-standard compared to the work done in films like those in the MCU or Star Wars franchises: in other words, ILM kicks the ass of whoever was in charge of making this film visually ‘amazing’; it’s not.

It was an enjoyably unusual experience though, the cast is international, and they all speak in their native tongues at times throughout the film’s duration.

The Wandering Earth, as a genre film, does deserve points for the sheer audacity to tackle a production whose narrative has so immense a scope. The film was, for me, very reminiscent of Space Battleship Yamato (2010) another ambitious movie based on material from a popular manga, and like that film, the stakes in The Wandering Earth are just as crucial in assuring the survival of the planet and humanity at the same time. With a narrative filled with a lot of the same themes commonly found in Japanese genre stories about the importance giving ones all for the team, and how destiny sometimes calls on some of us to make the ultimate sacrifice for the greater good of all.

The film uses common devices used to narrow the scope of such a  big story by focusing on a few key characters, their relationships, and what they are experiencing. The film’s narrative, by some standards, would be considered corny, cliched, or worse, but it does a pretty good job of putting a human face on a story with such a monumentally large span.

The Wandering Earth ultimately fails to successfully portray the gigantically global scale (and beyond) of the events it attempts to depict realistically. But it does have some enjoyable genre moments, like when the camera begins a tight shot that keeps widening out until it reaches global dimensions portraying the colossal hardware and tremendous amount of labor involved in transforming the planet into a spaceship that works.

What becomes almost amusing along the way, is everything imaginable goes wrong from practically the beginning of the film’s events, leading to multiple close calls, and narrow escape, after narrow escape by the film’s characters along with plenty of human drama that occasionally drifts wholeheartedly into melodrama. The film’s sets and props are excellent as required for any genre production.

Netflix gave no date for releasing “The Wandering Earth” on its platform.

The bottom line is I do recommend the film. its enjoyable enough standard fare, if you are looking for the next big thing in science fiction movies; look elsewhere, The Wandering Earth does provide another sometimes fun look at the changing face of genre movie and TV production in the 21st century. The lines have already begun to blur between what’s real and what isn’t these days in genre productions, I am still waiting for the line to disappear. As always, happy viewing.