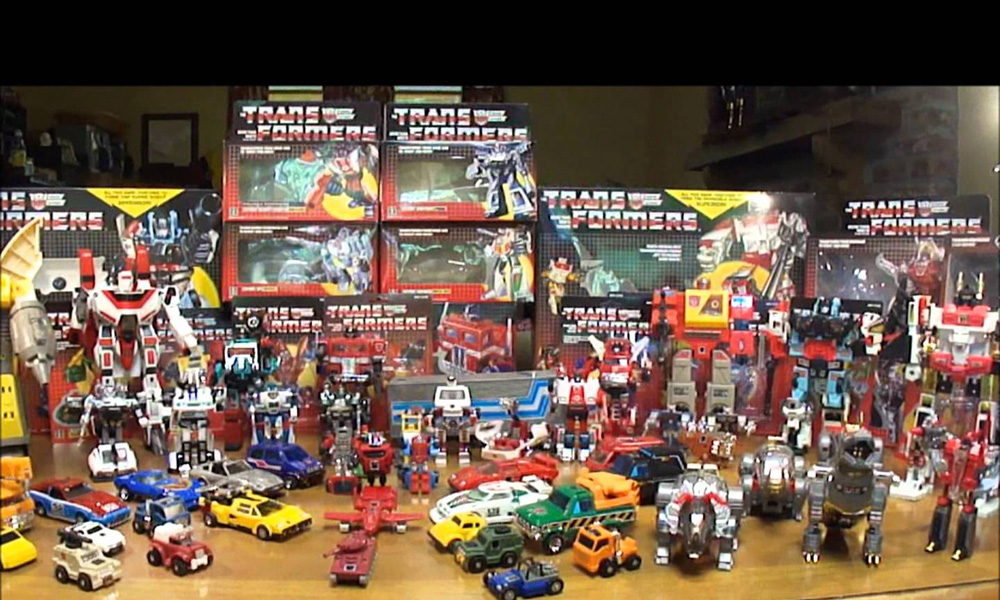 Back in the mid-1990s I was at a yard sale and struck upon pure gold…a huge box filled with Generation 1 Transformers figures as well as a large cache of weapons and accessories. I think I ended up paying $50 bucks for the entire box and knew it was a steal. However, as any action figure fan and collector knows, your figures are far more valuable when you have all of the accessories that came with them. My wife and I spent weeks scouring the internet for pics of the figures and trying to match the right weapon to the right figure. Back then the internet was still in its infancy and finding a single source was impossible. 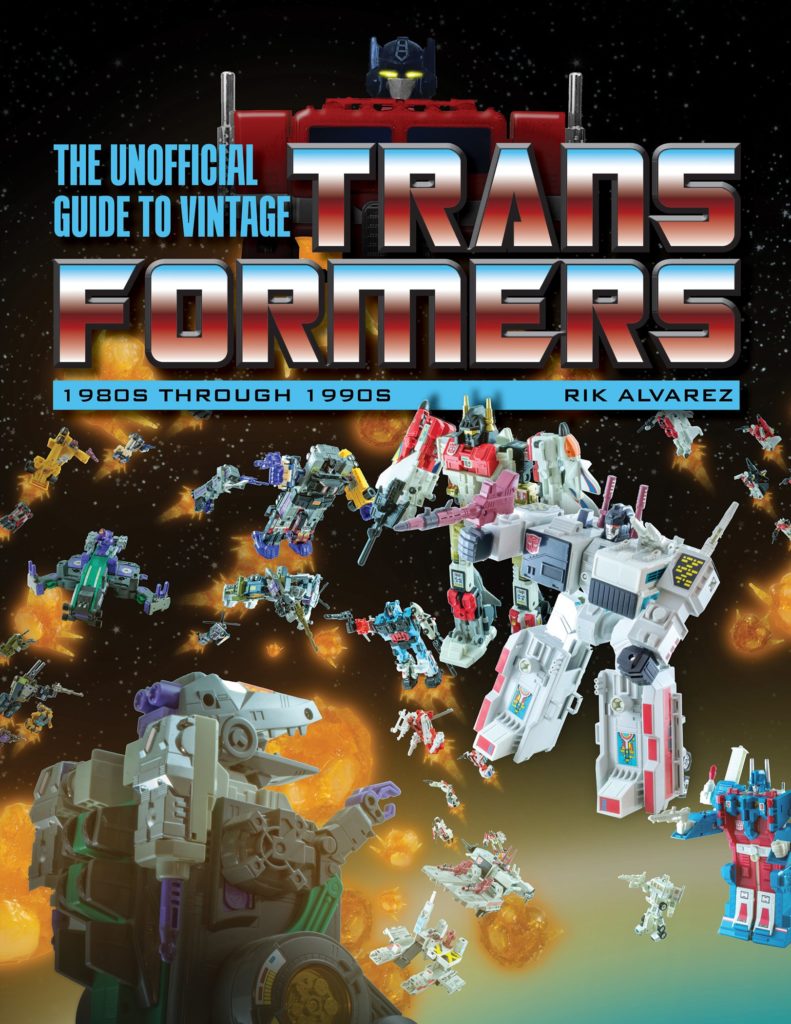 Things have changed today as there are some outstanding Transformers identification sites but if you are out garage sale hunting and want a great take along source then J.E. Alvarez’ The Unofficial Guide to Vintage Transformers is the go to book. The book covers the real meat of Transformers figures from 1984 through the mid-1990s which includes G1, G2, Beast Wars and Machine Wars.

Alvarez provides a brief history of the Transformers line and its roots in the Japanese Diaclone and Micro Change toy lines. In fact, many of those early G1 Transformers were direct ports of the original Japanese figures. Alvarez dedicates a chapter to each year of releases and includes a detailed checklist of all the figures released in that series. The sections feature pictures of the transformer in robot form, vehicle form, and in its original packaging.

Alvarez provides a good amount of detail about each figure including highlighting some of the differences between the original Japanese version and its American version. In particular he provides a lot of different pics of the more key figures like Optimus Prime, Megatron, Soundwave, Jetfire, and my personal favorite, Shockwave. He even pictures many of the foreign releases of the figures which is kind of cool. 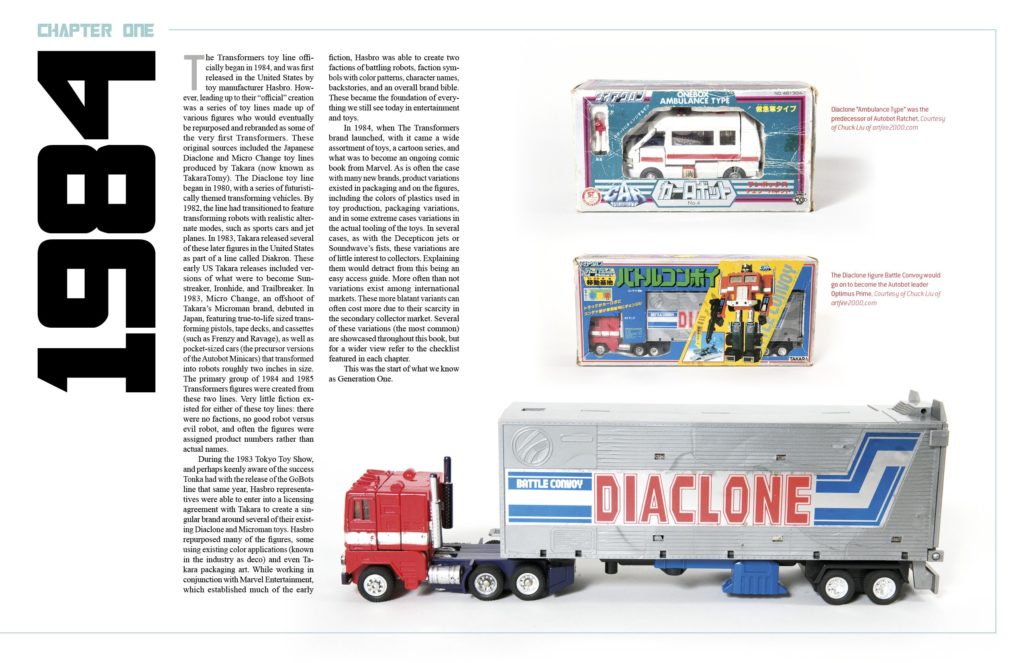 But getting back to the issue of matching figures to weapons, The book does picture the figure with his weapons and again, for the key figures will show the various accessories separately. But, for example the Yo Joe website for G.I. Joe figure collectors shows the figures and a pic of all the accessories. While the book will tell you that a figure came with missiles it doesn’t always tell or picture the number of missiles. Am I nit-picking? Perhaps, but if you are buying or selling Transformers this is required information. I would have much preferred to see this information than a pic of Greek or Argentinian packaging.

Even though Alvarez has also written a book exclusively covering Japanese Transformers this book still includes pics of many figures that were not originally releases in the U.S. including alternate version of Soundwave and Blaster known as Twin Cast and Soundblaster as well as Raiden, the trainbot combiner. 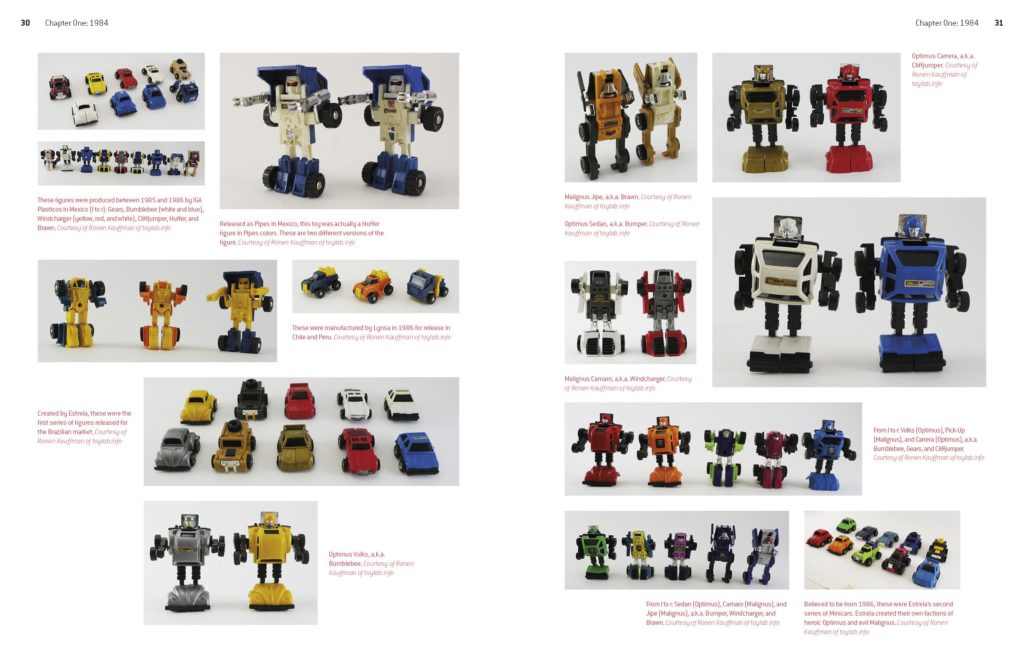 While ignored by many Transformers collectors I always rather enjoyed the short-lived G2 line, particularly because I got dozens of these on the cheap at Kay-Bee toys on deep clearance sales. In particular the new colored versions of the Dinobots, the tank version of Megatron, and the Laserbots were favorites and I think quite underrated. I’m very happy Alvarez included these in his book.

It took me a while to warm up to Beast Wars and Machine Wars. The Japanese exclusive figures were what really got me interested in those lines although those are not included here.

While not perhaps a 100% complete guide to this era of transformers, this is definitely a book which I will refer to, particularly on the more oddball lines such as the Pretenders and Action Masters as you just don’t see those pop up very often.

2 thought on “The Unofficial Guide to Vintage Transformers book Review”