Jack lives with her father and older brother, Andy. At night, something dark sneaks into their house. Jack isn’t sure what the creature is….but she knows it is something she was never meant to see. It steals things, things that give joy or hold happy memories…..toys. She calls it The Toy Thief. The dark being with the strange eyes doesn’t just want to terrorize them….it wants much more than that. 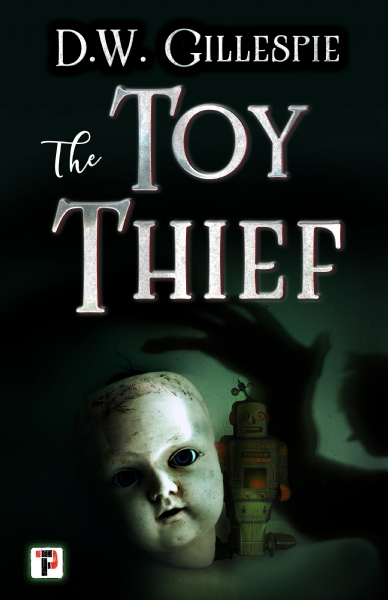 From the description of this book I was really excited to read it, it’s a fresh and original idea. Unfortunately this book missed the mark with me, there were some parts that were creepy, but all the jumping around in time and topic was confusing and somewhat irritating. I didn’t really like the main character, she was very arrogant and rude, so I couldn’t connect with her. She also blamed everything that goes bad around her on the fact that her mother died during childbirth. The guilt she has over her mother’s death, which she feels responsible for, feels insincere and is repetitive very early in the book.

I wish there was more of a focus on the toy thief, those were the parts that really grabbed me and sent chills down my spine. I feel there was a lot of gaps that could have been filled in with more on the toy thief. But by the time I had learned about what made the toy thief what it was I had already been so disconnected from the book that I really didn’t care, I had to force myself to finish this book.
Other then not liking Jack I didn’t have any feelings about other characters. For instance we first meet her brother Andy during the mutilation of an animal that Jack thinks is already dead. Now this being the first meeting you would think that he’d be a pretty scary kid but because it’s told from Jack’s point of view, and she isn’t scared of him, he felt flat to me.

Overall I think this would have been a great novella if the author would have focused more on the toy thief, I also think if it was told from a different point of view it would have worked better. I really didn’t like the way the story unfolded, the jumping around just makes it confusing and frustrated me a lot. I hate when it takes me so long to read books and this was definitely one that took to long, I could set it down and basically forget about it.