Ant-Man arrives in theaters Friday but the question on a lot of people’s minds likely is, “Who in the heck is Ant-
Man anyway?”  That question is interesting for a couple of different reasons.  First, even though Ant-Man is one of Marvel Comics’ oldest characters he’s nowhere near as well-known as Spider-Man, Iron Man, Thor, or the Hulk.  Heck at this point he is not even as well-known as Hawkeye or The Black Widow.  Secondly, Ant-Man has always been a character that has had a bit of an identity problem and frankly suffered from inadequacy issues. Today, we take a look at the tiny history of the superhero known as Ant-Man…

It is November, 1961 in the Marvel Comics offices in New York.  The company has just released Fantastic Four #1 and renamed itself Marvel Comics, changing the name from Atlas Comics.  The Fantastic Four is a huge hit and the “shot heard ‘round the world” when it comes to comic book history.  Stan Lee and Jack Kirby are sitting around trying to develop another character and they come up with Ant-Man!  Okay, that’s not actually what happened.  In point of fact, Hank Pym, the first character to hold the name of Ant-Man, DID come before Thor, Iron Man, SpiderMan, and The Hulk but his transformation into a superhero took a bit longer.

Pym made his first appearance in Tales to Astonish #27 in January 1962.  However, that seven-page story was more science fiction than superhero.  Inspired by Sci-Fi movies of the 1950s, Stan Lee and his brother Larry Lieber, wrote a story about a man who tests his shrinking technology on himself.  The success of Thor and The Hulk would cause Lee and Jack Kirby to bring Pym back in Tales to Astonish #35, give him a costume and a genuine superhero name…Ant-Man! 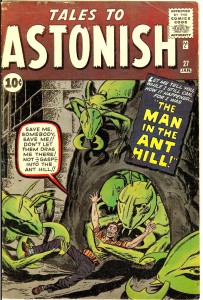 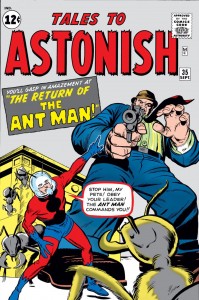 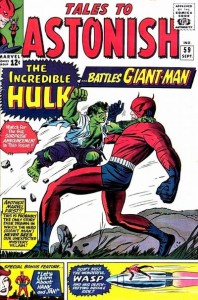 Ant-Man became the lead feature in Tales to Astonish and also a founding member of The Avengers along with his love interest, Janet van Dyne, aka The Wasp.  Just over a year later, Pym began a decade’s long practice of, exhaustively, changing his identity.  In Tales to Astonish #49, he used his technology called “Pym Particles” to become 12-feet-tall with super strength and stamina.  Since it would not make much sense to still call him Ant-Man he took the new moniker, Giant Man!  Giant Man was the lead feature until issue #59 when he began to split the title with The Hulk!

Pym remains with the Avengers until issue #15.  The following issue saw the first major shakeup of the Avengers lineup with Thor, Iron Man, Giant Man, and the Wasp all leaving, replaced by Hawkeye, The Scarlet Witch, and Quicksilver.  Apparently realizing that this iteration of the Avengers was somewhat under-powered, Pym returns in issue #28 however his name would again be changed from the less science fictiony Giant Man into the more superhero sounding Goliath.   Exposure to dangerous chemicals causes Pym to experience a form of schizophrenia…as if this guy needed something to aid an identity crisis…and he takes on a new guise with a new costume—Yellowjacket!

The following issue Pym would marry his longtime girlfriend Janet van Dyne in one of Marvel’s earliest wedding events.  It was also during this period that Pym would create one of the Avenger’s deadliest foes, Ultron, which of course would be changed in the films to Tony Stark, missing out on a prime opportunity to link Pym to the Avengers.  Pym would only remain as Yellowjacket for a relatively short time before returning to… you guessed it…Ant-Man!  One again becoming a lead feature in an anthology title Ant-Man had a seven issue run of solo adventures in Marvel Feature. 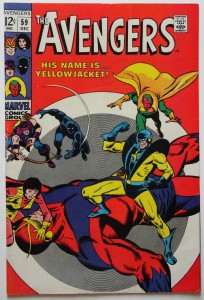 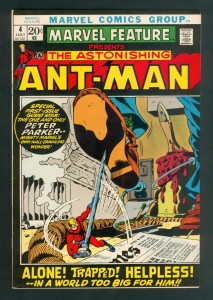 Pym shifted identities with alarming fashion.  He assisted the Defenders as Yellowjacket but soon returned to Ant-Man where he was brainwashed by Ultron into attacking the Avengers.  In the 80s, Pym suffers a mental breakdown and strikes Janet, leading to a divorce and his dismissal from the Avengers.  Throughout the next couple of decades Pym would return to both his Giant Man and Yellowjacket identities and join The Avengers and later The Secret Avengers.