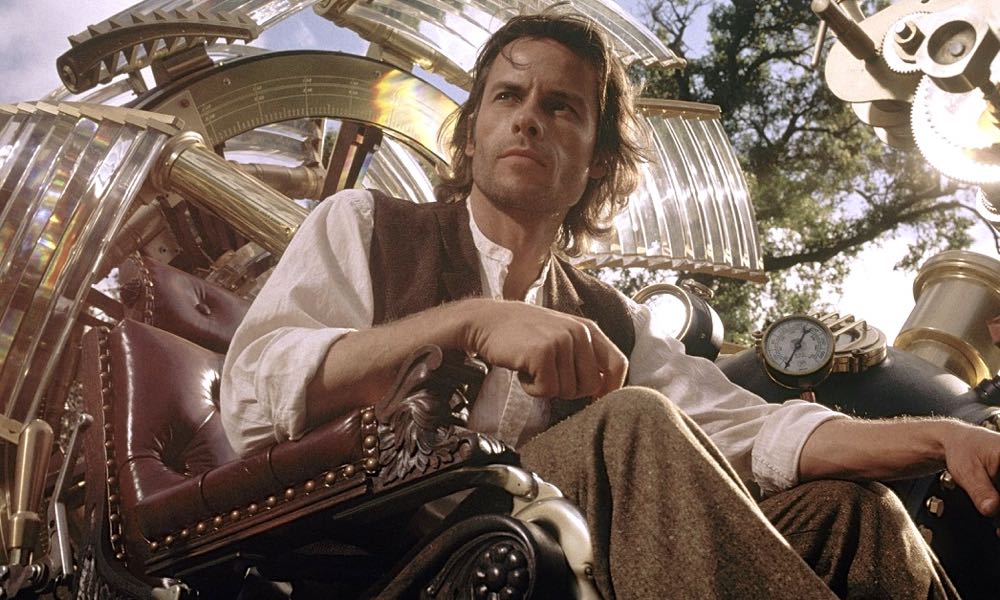 Revisiting the remake of The Time Machine for the second or third time last night, I remembered how skeptical I was when I first heard a remake was in the works. Would it live up to the legacy of the earlier film?  The more recent film goes in an almost entirely new direction while also being a loving tribute to the sixties production,  I had been a big fan of The George Pal 1960 version since first seeing it as a child. I still love that film; it’s a charming science fiction classic in the real sense of the word that was ahead of its time in several ways. But things change, and our modern sensibilities are not immune to the winds of evolution, much like the characters in HG Wells timeless classic. Still, the two productions, based on the same source material, remain distinctly different, but inseparable

In case you are unfamiliar with the title, The Time Machine is a 2002 American science fiction film loosely adapted from the 1895 novel of the same name by H. G. Wells and the screenplay of the 1960 film of the same name by David Duncan. Simon Wells, the great-grandson of the original author, served as director.

Both films are costume period pieces set in the Victorian/Edwardian period, and I do have an affection for well-done productions of that sort. Although the newer version still adheres, for the most part, to the basic plot of the original story, that’s where any similarity ends.  The original gets presented as an old school classic adventure of the sort made fashionable by Welles, Verne, Burroughs, and others. At the same time, the second film is decidedly more closely akin to the modern action thriller, with additional story elements not present in the original narrative, or the earlier film. For example, the 2002 version initiates the story differently with a tragically sad tale of loss that sets the tone of the movie-going forward. This plot change also motivates its chief protagonist, Alexander Hardegan (ably portrayed by Guy Pearce), to do what he does in a desperate attempt to save his lost love and find the answer to a question that continues to nag at his scientist’s mind.

Changes to the narrative are only the beginning in this film; a lot got altered in regards to some of the story’s other main characters too. For example, the time machine itself sports a new look, and the Eloi are no longer the not-very-bright child and cattle-like future humans of the original movie. They get transformed into more intelligent brown-skinned cliff-dwelling tribes of people closely resembling a mix of south Pacific islanders and Native American Indians. The Morlocks are much different here too. Instead of the slow-moving ghoulish cannibals of the earlier film, 2002’s upgraded Morlocks are nightmarish death-mask-faced powerful, and speedy predators bred to do the bidding of a race of albino masters with telepathic abilities. These monsters also get depicted as being much more bestial than their earlier counterparts and demonstrate an almost magical-looking ability to pass through solid ground as if it were water.

Watching this film again, I am struck by how much movies have changed in the last six decades and how the chosen approach changes what gets emphasized to suit our modern sensibilities. The first has a message about a friendship that transcends time, and the other is more about a classic struggle between good and evil.  Both films have their unique brand of charm, and both have a lot of thought-provoking things to say about the future of human evolution while using radically different approaches to tell the same story. While both are valid, I cannot say one is better than the other, can you?