May 28, 2018 Christina Hendricks, horror, Slasher, The Strangers Prey at Night 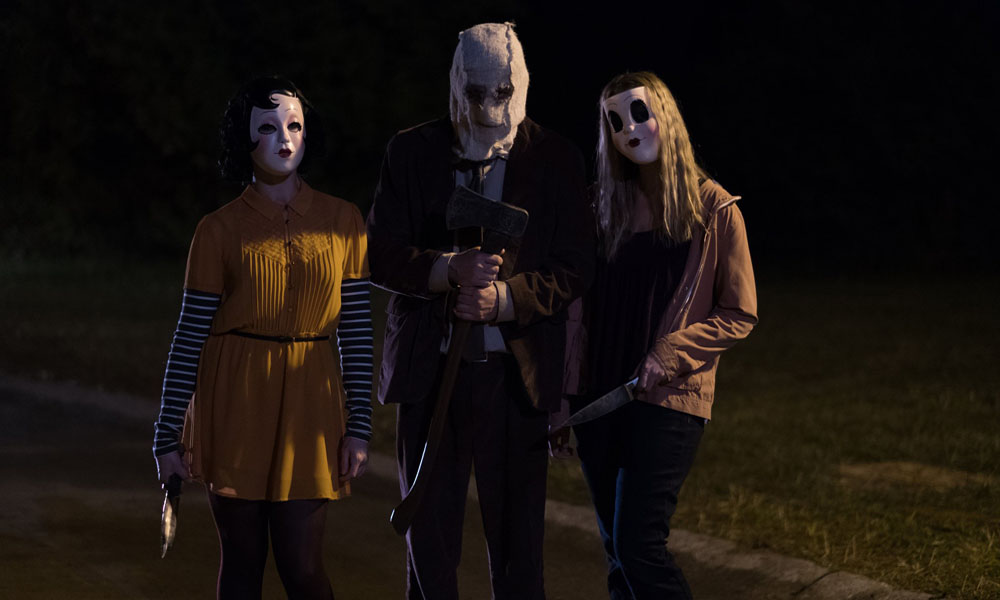 The Strangers: Prey at Night is the direct sequel to 2008’s The Strangers, a low budget film that was a huge money 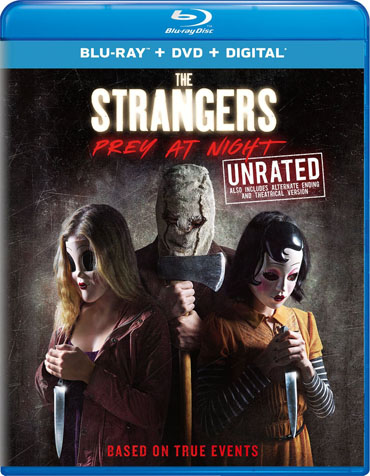 maker. What made the Strangers such an effective film was that it wasn’t your usual Hellspawned, indestructible killer like Jason Voorheis or Michael Myers but just thrill-killers, picking victims at random “because they were home.” That sense of sheer chance chaos made for a small but taut thriller. The fact that such a successful film took a decade to produce a sequel is a bad sign right off the bat. Usually producers strike while the iron is hot. Ten years is a lifetime in the film business.

The film opens by re-introducing us to the trio of masked killers from the original: Dollface, Pin-Up Girl, and the Man in the Mask as they murder an elderly couple in their trailer park home. Next we meet Mike (Henderson) and Cindy (Hendricks), their teenaged kids son Luke, and daughter, Kinsey (Madison). The family is taking a trip to their uncle’s trailer park for a short vacation before shipping troubled Kinsey off to boarding school.

Upon arrival at the park they find it totally deserted. Chalking it up to the summer tourists having left for the season they proceed to the park’s office that their uncle manages, and retrieve the key to the trailer in which they will be staying. Soon after arriving they hear a knock on the trailer door. A young woman is standing on the porch, asking if “Tamara is home” just as in the original.

The family soon finds itself under attack from the three mask-wearing psychos seen in the opening act. The major difference here is that while the first film was limited to a single household, this time the action is spread out over the length of an entire trailer park. Now, one would think that this would be to the family’s advantage. A larger area, more places to hide, heck they are even armed with their uncle’s pistol and yet they make every mistake ever seen in horror films…they split up inexplicably, they pass on chances to shoot their antagonists when they have the chance, etc…

Of course, it doesn’t help when the killers are apparently telepathic and seem to know where the family members are hiding leading to several scenes where they are suddenly attacked just when you thought they might catch a breather.

The film features a cast of veteran actors led by former Mad Men star Hendricks. One has to think that she owed someone a huge favor to appear in this bargain basement mess. Bailee Madison provides the most spark in the cast. The narrative of her troubles and the reason she is being sent off to boarding school is never explained and ends up just being a cheap contrivance to get the family to the near abandoned trailer park. Nothing like telling your daughter you love her by taking her on a cheap vacation where before sending her off to boarding school.

The one saving grace is that the killers are again sufficiently creepy and mysterious and their motives still unknown. It’s not enough to recommend the film but if you liked the original (a lot) you might find the sequel tolerable.

A Look Inside The Strangers: Prey at Night: Stars Christina Hendricks, Martin Henderson and director Johannes Roberts talk about the making of the film.

Family Fights Back: The cast talks their character’s fight for survival against the masked killers.

The Music of The Strangers: Prey at Night: A look at the films 80’s inspired soundtrack.