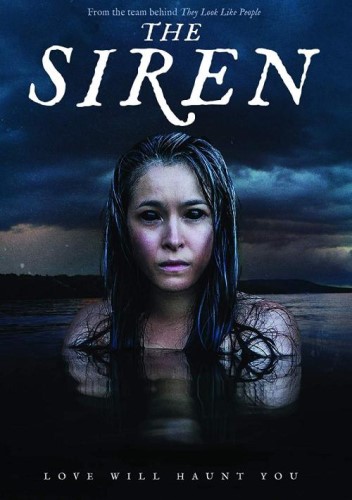 The Siren concerns the local legend of a mythological spirit of a murdered woman who lures men into her lake to drown them. Into her lair comes Tom (Dumouchel), who rents a small cottage on a seemingly serene lake. Tom is mute, but not deaf. We learn a childhood swimming accident left him with a crushed larynx, taking away his ability to speak. He’s come to the lake to try and conquer his fear of the water.

One night he meets a beautiful young girl named Nina who appears in the water at the cabin’s dock. Unlike you or I, or any rationally normal person, Tom doesn’t even question why this woman just appeared in the water in the middle of the night, but he is immediately smitten with her. Even the following day when she attempts to drown him, does he have any second thoughts that this might not be a healthy relationship.

Meanwhile, Al (Andrews) who lives down the road, is still in mourning over the death of his husband who drowned in the lake. He is convinced that Nina is a monster, and responsible for the death and sets himself on a path of vengeance.

The Siren is a modern dark fantasy or fable that is long on atmosphere and short on character and story development. At 79 minutes, Director Percy Blackshear leaves himself little time for such nuances. The Siren runs on pure emotion; the burgeoning romance between Tom and Nina and Tom’s thirst for revenge driven by his grief.

The film is beautifully shot. The haunting cinematography makes it seem as if these three people are alone in their little slice of reality. The musical score is appropriately dark and strikes the perfect tone throughout the film.

The performances are a mixed lot…Margaret Ying Drake shines as the mysterious Nina who enchants Tom with a mere gaze. On the other hand, the two male leads are both wooden and lacking in any semblance of screen presence.

The biggest thing working against The Siren is that it is often painfully slow. Even running at an economical 79 minutes it proves to be a chore in making it through to the end. There’s not enough story in which to invest even this modest amount of time.