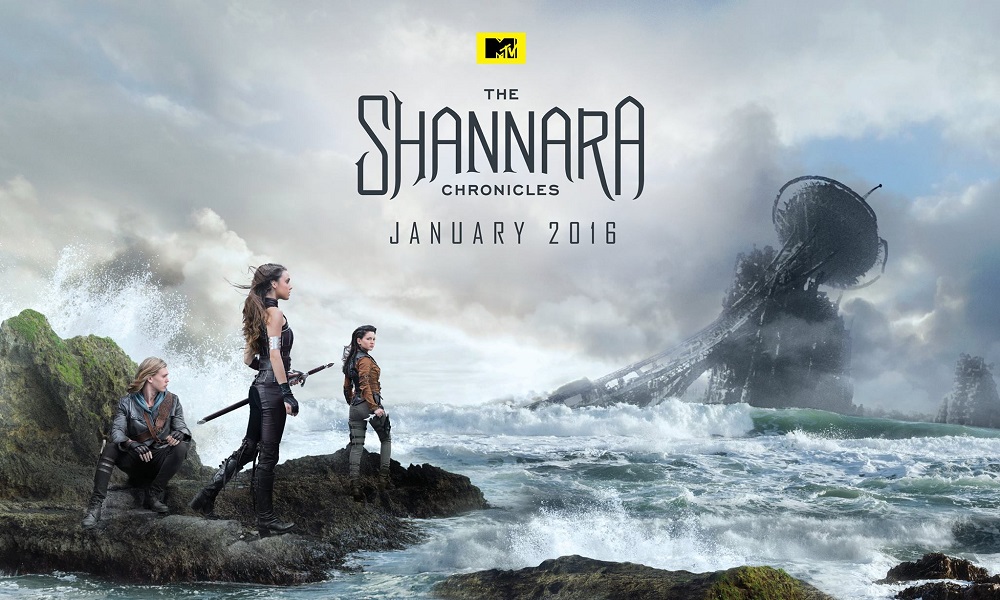 The Shannara Chronicles debuted last night on MTV with the first two of the ten episode series (as well as being simulcast on VH1 and TV Land). First a bit of background on the Shannara series…What I have been hearing since the series was announced was that it was just a rip-off of Game of Thrones. Not so fast! The first Shannara book, “The Sword of Shannara” was written by Terry Brooks way back in 1977…and I read it then. In fact, it was the first true epic fantasy that I had ever read since I would not read Lord of the Rings until at least a year later. And a good thing, too, because that book indeed WAS a rip-off of Lord of the Rings, and blatantly so. But with the second book in the series, “The Elfstones of Shannara”, Brooks found his footing with an original and imaginative sequel. To date, Brooks has written nearly 30 books in the series. However, unlike Game of Thrones, the Shannara series does not tell a single, on-going story. Rather it tells stories throughout many ages of history, usually as a trilogy, and focusing on different characters and events. The series is based upon The Elfstones of Shannara.

The setting for the books is The Four Lands but unlike your typical high fantasy tales this is actually a far future, post-apocalyptic Earth. Technology has been lost giving way to an age of magic and races of elves, dwarves, trolls, gnomes, humans, demons, and all manner of monsters and mythical beasts. In the distant past the elves fought an army of demons for control of the Four Lands. The elves exhausted nearly all of their magic in the creation of The Forbidding, a spell that imprisoned the Demons beyond the confines of the world. They also created the Ellcrys, a beautiful silver tree with crimson leaves to maintain the Forbidding. This is where the story begins in The Shannara Chronicles…

It is set several decades after the events in Sword of Shannara. In the Elven Kingdom, young warriors run a gauntlet blindfolded through the woods. The first seven who make it to the end become The Chosen, whose task it is to guard and care for the Ellcrys. The final of the seven is Princess Amberle (Drayton), granddaughter of King Eventine Elessedill (John Rhys-Davies), and the first female to become a member of The Chosen. However, when Amberle touches the tree she gets terrible visions of the future where the tree is dead and the land is attacked by demon hordes. Terrified, she flees the city of Arborlon. The Ellcrys soon becomes sick and its leaves fall off. This weakens the Forbidding spell enough to allow the demon Dagda Mor to enter the world. He summons The Changeling, a shape-shifting demon to go to Arborlon and kill The Chosen.

Elsewhere, Wil Ohmsford (Butler), the Son of Shea Ohmsford (The hero from Sword of Shannara) has left his home in Shady Vale in possession of the powerful Elfstones which he received from his mother who passes away at the start of the episode. Allanon (Bennett), the last of the druids and who has lived for centuries, awakens after sleeping for decades. He goes to Arborlon to warn the King that the Ellcrys is dying and that demons are on the loose in the Four Lands. He tracks down Wil Ohmsford who has since had the Elfstones stolen by a beautiful Rover (think road bandit) named Eretria. They journey to the Druid Keep of Paranor to consult an ancient book of lore to find out the means to re-grow the Ellcrys Tree and stop the demons.

There was both good and bad to like in the first two episodes. Let’s start with the bad. First off, no one is going to confuse this show with Game of Thrones. It simply doesn’t have that big screen, epic feel. It’s not a bad looking series, don’t get me wrong. In fact its sweeping cinematics are going to outdo most shows on TV. But GoT sets the bar extremely high. Secondly, this is almost painfully an MTV show, confirming many fans worst fears. Despite the fact that the Shannara series has been around for over 35 years and most of its fans are likely between 30 – 60 years of age, the show is far too strongly targeted at the under 25 demographic. Nearly every character is young, and model-like in appearance. Apparently outside of the King there are no other elves of middle age.

The dialogue is also sketchy at best. There are far too many modern colloquialisms used than one would expect in a medieval-style fantasy series. This is highly damaging to the overall effect as you view the characters more as playing dress-up than believing their performances. And parts of the soundtrack are awful as well with modern beats and guitar riffs which simply do not fit the content.

On the positive side there are some good performances despite the dialogue foibles…Manu Bennett, always a joy, cuts a powerful take on the mysterious druid, Allanon. John Rhys-Davies as you would expect is strong as the Elven King. I also enjoyed Austin Butler as Wil. These sort of young, country-innocent characters were a staple in the Shannara series and Butler captures the naive young Wil perfectly.

The visual effects of the demons and magic was also quite good; perhaps not up to big budget film quality but definitely superior to SyFy channel offerings. The magical effects were also solid and it seems like there will be no shortage of arcane power used in the series. There wasn’t a great deal of action but what was featured was nicely staged. The demons looked sufficiently terrifying as well.

It was an uneven start at best for The Shannara Chronicles. It sticks faithfully to the source material which is a good thing. Hopefully as the show gets deeper into the plot some of these weaknesses will fade.

One thought on “The Shannara Chronicles Season 1, Episode 1 & 2 Review”