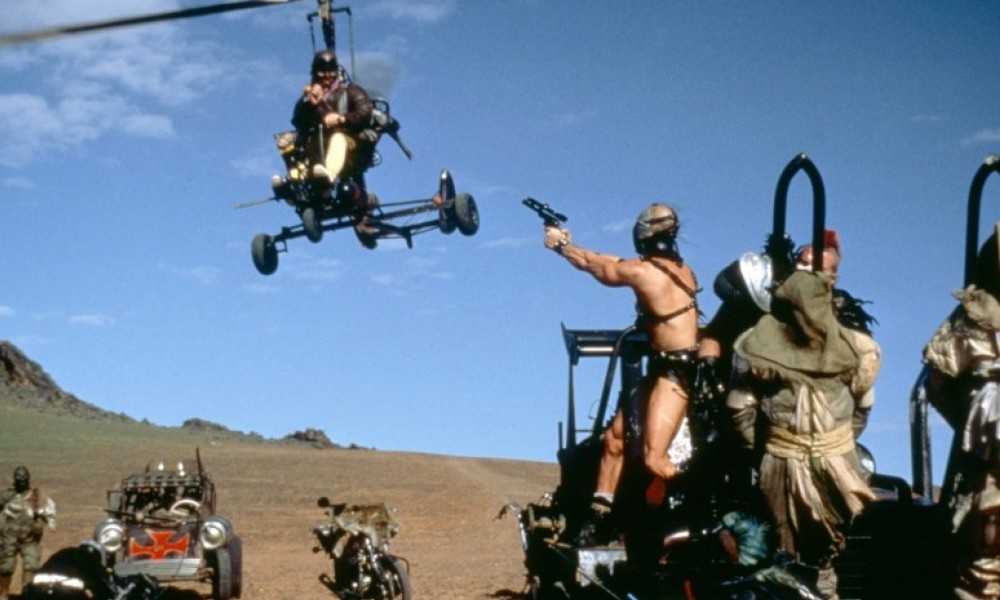 This is a rarity: a sequel that is actually better than its predecessor, in this case 1979’s Mad Max. With a much bigger budget, more spectacular stunts than the first movie, this is undoubtedly the best movie in the original trilogy before the series was rebooted with Mad Max – Fury Road in 2015.

In it, a dog food eating Mel Gibson helps a peaceful settlement against a gang of marauding bikers – all in his own self-interest, of course. The final chase, with a huge oil truck pursued by fellow post-apocalyptarians on all kinds of outlandish vehicles, is thrilling and exciting to watch. It definitely ranks as one of the most exciting car chases of all movie history along with classics such as The French Connection and Raiders of the Lost Ark.

Watching The Road Warrior, you can’t help but marvel how the Western didn’t die but just sort of, well, mutated. Strip The Road Warrior of its demolition derby post-apocalypse trappings and what you have is a Western with Mel Gibson channeling Clint Eastwood’s Man with No Name.

Although the Western has been pronounced dead many times, it has simply been sublimated into the Hollywood collective consciousness. In fact, many times old Western plots have simply been retold with a modern even sci-fi, sheen nowadays. We often watch Westerns without realizing it – they just ride cars instead of horses and fire blasters instead of old six-shooters. Take 1998’s Soldier movie starring Kurt Russell for example: Russell comes across a peaceful settlement being attacked by bad guys and, well, helps them out. It’s the basic Shane plot being redone once again . . .

Even if movies don’t always steal the Shane plot, Hollywood can’t resist putting in some other Western element. Take the Mos Eisley canteen scene in Star Wars: exchange Luke Skywalker with some similarly green cowboy character and you have a scene that has been replayed numerous times in countless Westerns.

The plot of The Road Warrior may be old hat, but what its director George Miller came up was completely unexpected. The first Mad Max movie’s plot was a standard revenge tale: evil motorbike gang (is there any other kind?) kills cop’s wife and kid, cop kills them all in retaliation. So what to do in a sequel? Let some other bad guys kill off yet more of Mel Gibson’s friends and relatives? Like those endless Death Wish sequels in which repellent criminals will inevitably wipe out anybody who comes within a few meters of Charles Bronson – thus inducing Bronson to kill them off once again?

No, The Road Warrior steals another Western plot – but wisely spends its bigger budget on more lavish car stunts and special effects. If some of the action sequences in Mad Max reminded you of a demolition derby, then Road Warrior will drive this analogy home. The end chase is one over-the-top demolition derby, filmed with the same grittiness that marked the previous film. Audiences watching The Road Warrior for the first time today may not be too impressed with it: in the meantime, we have seen many imitations and its (inferior) 1985 Mad Max Beyond Thunderdome sequel. It isn’t, for example, as spectacular as anything seen in the recent reboot starring Tom Hardy and Charlize Theron. Today’s CGI action epics will no doubt boast quicker editing and more impressive special effects. Also, Brian May’s relentless Bernard Hermann-like music score may seem archaic to modern audiences.