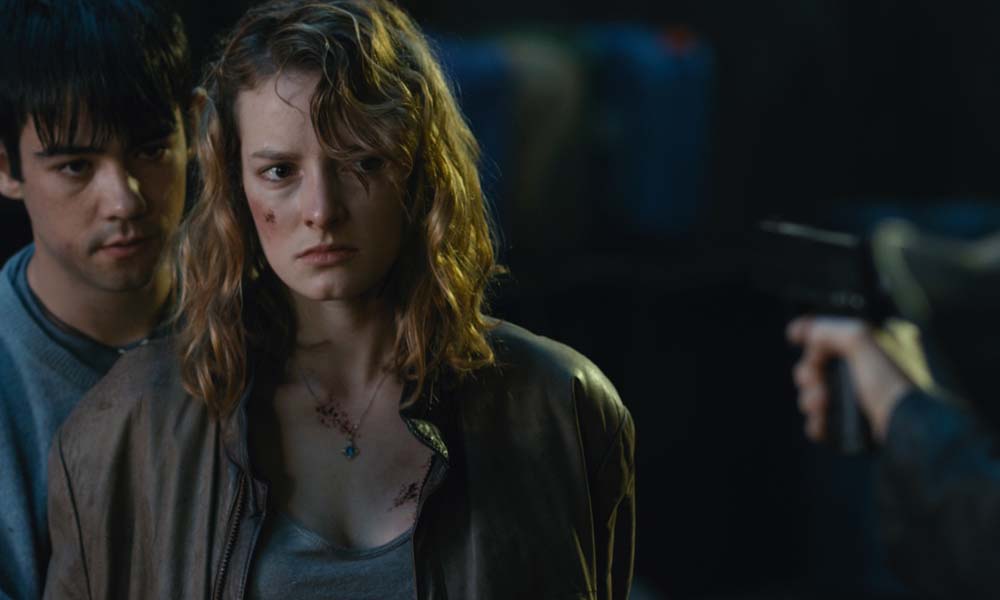 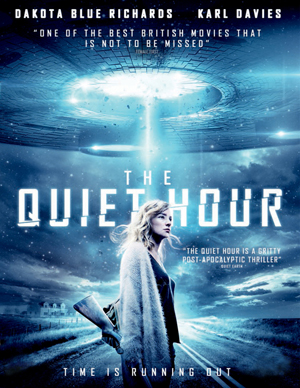 The Quiet Hour is an odd blend of alien invasion science fiction and survival thriller. While neither element is fully embraced, the separate parts as a whole make for an interesting, although somewhat disjointed view.

Earth has been invaded by a hostile alien race. Their giant, beehive-like mother ships hover in the sky while smaller ships scout for resources and kill any humans they detect. The only respite from the alien ships is a short, two-hour window when they return to the mother ships, giving survivors an opportunity to scavenge for food.

Two of these survivors are Sarah (Richards) and her blind brother Tom (McMullen). The siblings eke out an existence on a remote country farm, subsisting on a small bit of livestock and crops they raise. Their peaceful existence is interrupted by an intruder looking for supplies. After knocking the man out they discover that his name is Jude (Davies) and he is actually a reporter who took the uniform off a dead soldier. He is on the run from a group of bandits who have arrived at the farm demanding Sarah turn him over…or else…

The backdrop of the alien invasion is merely the stage on which the survival thriller is set. Beyond the fact that the aliens are digging deep into the Earth to mine for resources we never find out who they are, that they look like, or what resources they came to take. While some might look at this as a giant plot hole you have to come at it from a different perspective. In this time, in this place, the invasion is secondary to Sarah, Tom, and Jude’s more clear and present threat of the bandits who want to kill them and take what they have.

That is the real genius of the story. It could have told quite easily without the alien part of the story. But the fact is that the characters do not know much more than the viewers. They only know their world has come under attack and they are doing what they must to survive.

In fact, it is the survival thriller side of the film that falls flat. After the bandits arrive on the scene with a harrowing attack, the story slows to a crawl, teasing a romance between Sarah and Jude with younger brother Tom disapproving of this stranger in his home. Meanwhile, the bandits prove to be remarkably inefficient at their profession making you wonder how they have managed to survive as long as they have. In the end, a week set of antagonists makes for a story that isn’t as filling as it could have been.

Stéphanie Joalland both wrote and directed the film. She does a splendid job of capturing the sense of remote exile of Sarah and Tom. Their only connection to the outside world had been a CB radio until Jude arrived. The performances of the main three cast members are passable and mostly believable, stretched too thin only by the material they have to work with.

I’ll give this a moderate recommendation for the strange mix of plot elements if nothing else.