REBORN TO KILL: A REVIEW OF THE PRODIGY (2019) SANS SPOILERS

Horror fiction—good horror fiction, anyway—plays upon our deepest fears, threatens our sense of existential normalcy, and subverts our standards of human decency.  So it shouldn’t surprise us that one of its most popular tropes is that of the “evil child,” the preadolescent who’s either innately evil or possessed by an evil entity.  After all, children are nonthreatening to and naturally elicit tender and protective feelings from adults, so evil ones disturb us deeply and catch us off-guard.  Furthermore, parents—good parents, anyway—want the best and fear the worst for their children, so a child afflicted by something seriously wrong or who goes seriously wrong is their worst nightmare.

And the tagline for The Prodigy (2019) is “There’s something wrong with Miles.”  But at first it seems there’s “nothing wrong” with him—quite the opposite, in fact.  When he’s born to parents who “tried so long to have” him, his mother declares, “He’s perfect,” and he certainly seems to be.  An adorable little boy with heterochromatic eyes “like David Bowie,” he begins “using some words” by age six months and attending a special preschool at age two because his “intelligence is off the charts.”  But while his “brain is extremely well-developed in certain regions[,] there are other areas that appear to be delayed.”  So Miles is asocial … and at age eight becomes aggressively antisocial. 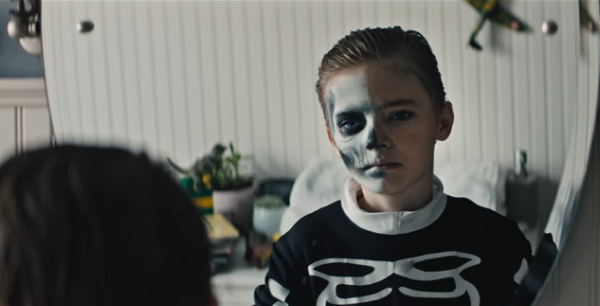 The original evil child movie, The Bad Seed (1956), features a self-contained eight-year-old girl who inherited psychopathy from her serial killer grandmother.  The Exorcist (1973) features a sweet twelve-year-old girl possessed by an ancient Mesopotamian demon.  The Omen (1976) features a saturnine five-year-old boy who’s the Antichrist born into a family of wealth and power.  And The Prodigy features swipes from these classic evil child movies but also an original twist on the trope: the source of the evil isn’t anethopathic genes, demonic possession, or being sired by Satan but a serial killer’s consciousness that transmigrated from his just-killed body to Miles’s about-to-be-born one.

Revealing that the consciousness of a serial killer, just after his death, invaded Miles just before his birth isn’t a spoiler for those who haven’t yet seen the movie—it’s virtually spelled out for the audience in the parallel-edited opening scenes, with the heterochromatic eyes and blood spatter pattern on the chest of the naked, gunned-down serial killer matching those of the naked, newborn Miles.  (Incidentally, because The Prodigy is rated PG-13, the serial killer’s private parts are kept private from shot to shot with various “strategic coverings,” the final and funniest one being a rifle barrel.)  And tipping its hand at the start is just one of many problems with Jeff Buhler’s script.

Its premise and basic plot provided a solid foundation, but what Buhler built upon it is spare and shoddy.  In addition to leaving no mystery about what’s “wrong with Miles,” it has no subplots and very few plot twists and feels episodic and perfunctory, as if it’s merely covering the (minimum of) events necessary to the plot.  The setting and characters lack detail as well.  The young family of three lives in a cold, sterile, sparsely populated Philadelphia (which is actually Toronto) and are fleshed out only enough to satisfy the modest demands of the bare-bones plot.  What the father does for a living is undisclosed, and the parents seem to have no backgrounds, hobbies, or social lives.

Because of this, The Prodigy has a weak emotional core and no sense of normalcy being subverted, which is disastrous for a movie about parenthood’s dark side: how parents want their children to be special and superior, how far they’ll go to sacrifice for and protect them, and how they never stop loving them “no matter what [they] do.”  (Even Ted Bundy and Jeffrey Dahmer kept their parents’ love and support.)  The premise was perfect for this since the serial killer’s consciousness makes Miles a genius (because the intelligence of an adult with even a dull-normal IQ of 85 would be very extraordinary in an eight-year-old), makes him “sick,” makes him do evil things, and threatens his existence. 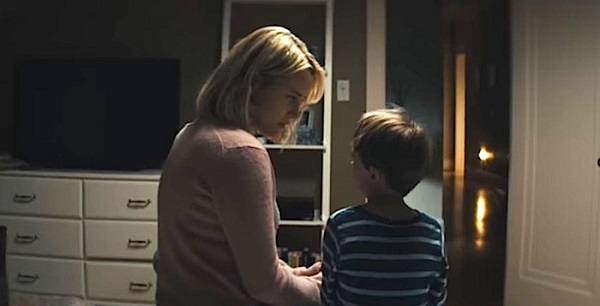 So The Prodigy could’ve had a solid story about the parents’ dream putrefying into a nightmare, their loftiest hopes giving way to their deepest fears.  It should’ve shown more of the personalities of the parents and the real Miles, with the family dog reacting not just negatively to the serial killer’s “invading soul” but positively to Miles’s “natural soul.”  There should’ve been mention of the financial strain of sending Miles to special schools.  And the accurate reincarnation diagnosis, “only foreign to Western minds,” should’ve been introduced more credibly and after exploring the possibilities of first Asperger syndrome and then dissociative identity (multiple personality) disorder.

The movie would’ve been a good one with these and other revisions to its script because that’s where almost all its flaws are.  Nicholas McCarthy’s solid directing creates a creepy atmosphere of oppression and apprehension and makes the movie seem as if its budget were more than a low-risk $6 million and its rating were R instead of the non-audience-restricting PG-13.  And credible and capable are Taylor Schilling (the star of Netflix’s hit original series Orange is the New Black) and Peter Mooney as the parents and Jackson Robert Scott (the doomed Georgie in It (2017)) as the psychopathic “prodigy.”  In sum, The Prodigy’s positives and negatives balance, making it on balance a so-so movie.