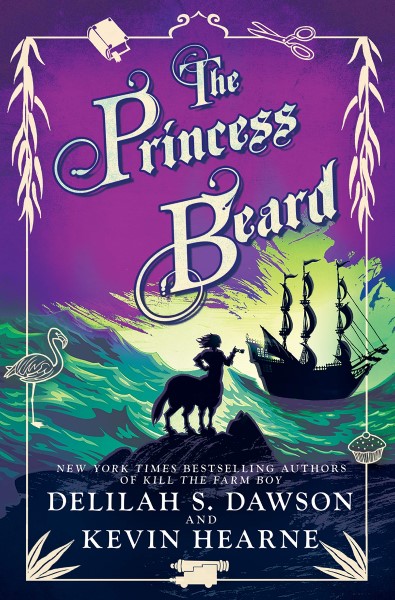 This is the third book in the pun-filled, genre-aware series the authors brought us in Kill the Farm Boy and No Country for Old Gnomes.

This installment continues the tradition of new characters and adventures set in the same world. If you’ve read the other two books (which is completely unnecessary, so don’t be afraid to jump right in), the world of Pell will be delightfully familiar. The characters do tie in to previous tales – the princess running from her family and expectations was first seen in the sleeping tower in Kill the FArm Boy, though she didn’t have any lines then. Similarly, the dryad with dreams of being a lawyer is a passing character in No Country for Old Gnomes. The tie ins are a nice continuation for readers of the previous books, and the characters were minor enough in the previous ones that you’re not missing anything if you aren’t familiar with the series.

Joining those two are an entire pirate crew, a swole-bro centaur with an emasculating secret, a very un-elf-like elf, and a parrot pirate captain. In anyone else’s hands this cast could have been flat, caricatures of themselves without much depth. But as expected, I found characters with surprising depth. This time around there’s a very funny environmental plot, and pulled off without being preachy or heavy handed. This is probably because it’s pulled all together with their standard puns and ridiculous scenarios. Along the way you get to see much more of the world as well.

If you’re looking for light humor and funny adventures this is a good book to pick up. Having read all three in the series, I will say that the quantity of puns is getting to be a lot. I’d recommend reading other things in between each installment. But if you’re someone who really loves puns, or just wants an easy entertaining read, Dawson and Hearne have delivered again.