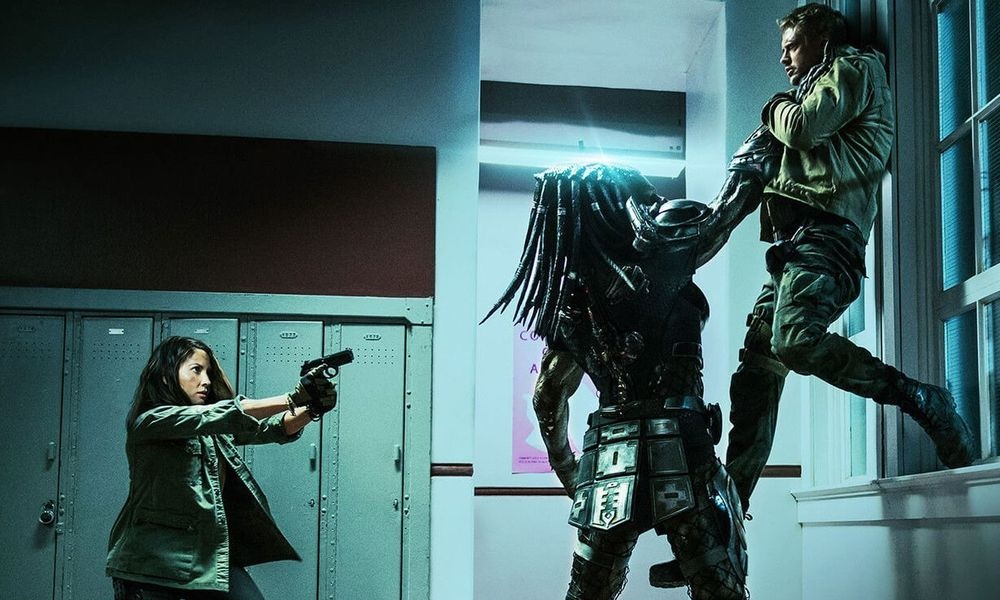 I’m a big fan of the Predator series, with the unpleasant exception of the AvP debacles, and had high hopes for Shane Black’s latest take at the ubiquitous monsters from outer space. He comes by the series in an odd way – as an actor, rather than a writer or director, essentially playing the first character ever killed by a Predator onscreen – and at first glance, he seems like an ideal fit. Certainly, The Predator aims to move the series forward instead of just rehashing the old soldiers-picked-off-in-the-jungle routine. But somewhere along the line, its copious shortcomings end up overwhelming its better elements, turning what could have been a grindhouse blast into an interesting misfire.

Some of that lies beyond the purveyance of the movie itself. The film smacks of copious jockeying in the editing room, at least partially in response to recent revelations that Black cast a registered sex offender in a supporting role. (Really, Hollywood?! REALLY?!) But even beyond that, the film’s technical structure is a hot mess. Plot developments arrive too quickly, scenes lurch forward without any real exposition, and though there’s a certain crazy energy in the way it careens through the plot, it needed a much firmer hand at the tiller to give the results any traction.

The controversy also taints Black’s signature boys-will-be-assholes dialogue. It’s breezy and fresh, but also puerile and adolescent, with a fixation on button-pushing for button-pushing’s sake. The same holds true for the high levels of gore, which isn’t a problem in and of itself (anything less than an R-rating would do the franchise a grave disservice), but are presented with such a desperate yearning to get a rise out of the prudes that it undermines the earthy charms the rest of the film wants to provide.

And that’s a shame, because The Predator certainly carries its share of skidmark joys. It starts with the slightly subversive approach to the expected formula. This time, an alien vessel crash lands in the jungles of Mexico as part of an ongoing intra-species feud (possibly connected to the battles present in Nimrod Antal’s underrated Predators), where a U.S. sniper (Boyd Holbrook) ends up getting the better of its occupant. The still-living Predator is sent off to a lab to be dissected while the sniper gets a free Section 8 and a trip to the nut-hatch to keep him quiet. Both break free at about the same time, and zany mayhem ensues.

The best parts of the scenario entail Holbrook and his fellow head cases trying to keep it together long enough to escape the authorities and track down the monster (as well as bigger, scarier Predators who show up in search of their wayward companion). In and of itself, it’s a serviceable notion, and it gives Black a chance to really play with the little details that constitute his forte. The best parts of The Predator stay safely within that realm: small jokes, the easy camaraderie of the heroes, the occasional twist that elicits a surprised chuckle. Such joys are not lightly dismissed during the trash-choked days of September, and they provide the film with a certain snap that keeps it from getting dull. I’ll also give a shout-out to Olivia Munn, who blew the whistle on the sex offender and who shows some winning verve as the Scientist Here To Explain What All Of This Means.

Credit The Predator also with gamely attempting to move the mythology forward. The previous films in the franchise introduced a disparate array of details that deliberately raised a lot of questions about who and what these monsters are. Black works hard to provide some cohesive answers, and to do so in ways that enhance the aliens’ mystique rather than eliminate it. Under his eye the Predators become more sophisticated without losing the qualities that made them so appealing in the first place. The concepts won’t reach the annals of sci-fi classics, but they hold together well and give the series a few options for moving forward (which, as you may have guessed, Fox is all too happy for).

And yet despite those qualities, The Predator ends up on the wrong side of its skeezy roots too often for comfort. Black’s shtick holds surface amusements, but something darker lies beneath the surface. There’s a misanthropy in some of the exchanges: a sense of meanness that detracts from the good earthy fun the rest of the film aspires too. Too often, Black goes for the easy jab, trying to get a rise by snidely undermining the story and characters. The most egregious comes with ham-handed riffs on the most memorable lines from the first movie: a crude attempt at homage that feels distressingly like script envy. But similar issues abound, which conspire to sink the movie’s modest charms beneath their weight.

Had The Predator brought more to the table, its greasier moments could be more readily forgiven. Had it been less greasy, its appealing components might have flourished.  But without more in the positive column, the negatives dog it at every turn, over and above the ongoing controversy surrounding its production. The series has definitely done worse, but I don’t expect more than the hard-core fans to give this one more than a single viewing.