This week we are going outside of your usual “classic” scope of books and taking a look at a modern classic by Williamn Gibson and covered by our newest reviewer, Gene Turchin.

William Gibson created cyberpunk but lost his way for a while with books like “Pattern Recognition.” Some of the in-between books over the last few years left me with a ho-hum, yawning need for a nap. There was no napping while reading “The Peripheral.” It turned out to be one of those hangover books. You know you stayed up way too late and are going to suffer for it but you’ll have a smile on your face as you remember the fun you had. 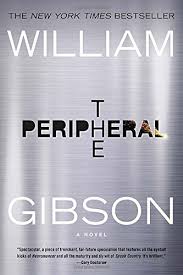 In The Peripheral he returns to the roots of cyberpunk and possibly something that will be later called Appalachian Punk or Rust Belt Punk.

So, if you could have time travel without the actual physical travel, go to the future by uploading your brain into a robotic peripheral seventy years hence, would you play that game. Yeah, all of us would, especially if you were a quadruple amputee war-vet.

The future people communicate back to the past via a magical quantum server. I say magic because this is not a hard science sci-fi book. Gibson makes this neat McGuffin believable.

The cast of characters is large but the principals are, Flynne Fisher, a young girl living in the rust belt future and works a gamer (ain’t the future great?). Wilf Netherton, who resides in Flynne’s future and he works as a publicist which is a somewhat nebulous job description.

Stay with me. Assuming our own, real-world time line is linear and Flynne lives in our future (twenty second century) and then Wilf and his peers live in her future an additional 70 years down that highway, you should have a rough, if not wobbly, trek through this book. And it starts with a possible real world murder inside a video game.

A cataclysmic event called ‘the Jackpot’ occurs somewhere along that road upending the world. The Jackpot is a combination of disastrous climate change and social upheaval and much of the world’s population is decimated.

We have 3D printing, corrupt government, a shadowy future-future organization/person named, Milagos Coldiron, murder by nasty nanotech beasties and then existence in the future as a peripheral. In the end William Gibson drags you along and provides fodder for days of discussion.