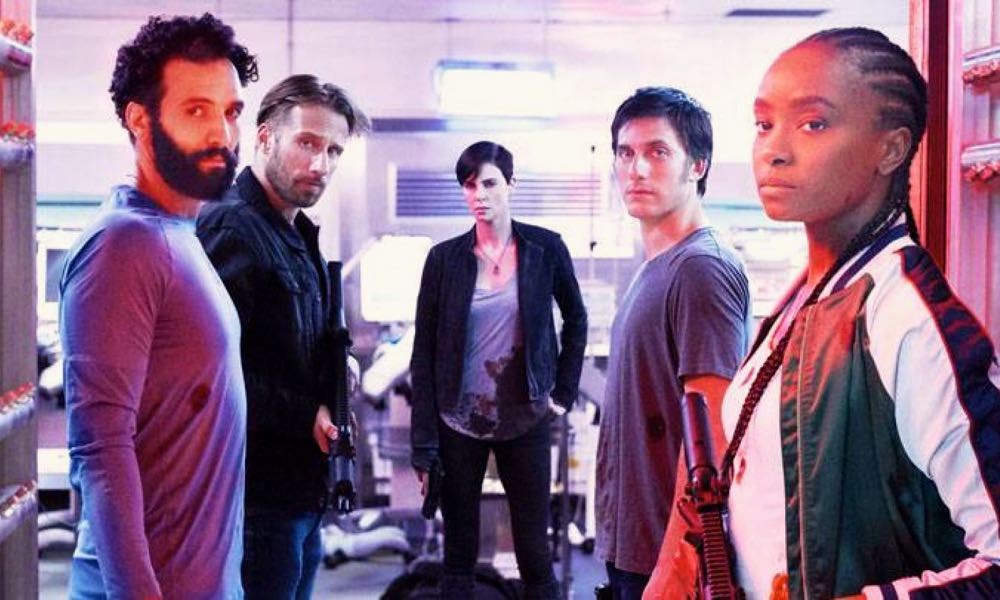 I rewatched the sci-fi action-thriller The Old Guard again last night. Like many genre fans, I am weary of the modern formulaic action-thrillers, and I could not remember and wasn’t sure if there was anything to recommend this action movie over all the others.  You know the sort of film, I mean, the sort with lots of gunplay in which everyone knows martial arts. In other words, I wanted to know if The Old Guard was more of the same with a fresh coat of paint like so many other contemporary action thrillers out there competing for our attention these days. To some degree, this film is more of the same. Still, The Old Guard distinguishes itself as a well-constructed film that doesn’t overdo it with violent action scenes to the point of self-indulgent eye-candy. The Old Guard saves itself with a compelling narrative, a little reminiscent of  Highlander, paired with a unique premise and excellent writing.

The Old Guard is a fast-paced action thriller that starts out using plenty of that violence to introduce its characters and premise. The film’s narrative revolves around a group of immortal soldiers turned mercenaries, the violent world they live in, the relationships, and the rules they live by. These guys are not noisy and flashy as they go about their business. Like the style of martial arts they use, they are as quick and deadly as a snake bite.

As the film progresses, it’s revealed that these immortals have some intuitive mental connection with each other and can sense one another from a distance. We meet this group as they discover there is another like them. The film’s narrative from that point forward mostly occupies itself with how that person they discover reacts to finding out she’s one of them and how they respond to her. Also, The Old Guard  spends a lot of its time painting an elaborate, detailed portrait of Charlize Theron’s character Andy, the group’s leader and an immortal of undetermined age,

Not familiar with this title? The Old Guard is a 2020 American film directed by Gina Prince-Bythewood and written by Greg Rucka, based on his comic book of the same name. The film stars Charlize Theron, KiKi Layne, Matthias Schoenaerts, Marwan Kenzari, Luca Marinelli, Harry Melling, Van Veronica Ngo Chiwetel Ejiofor. It follows a team of immortal mercenaries hunted by a modern corporate entity.

Chief protagonist Andy is portrayed by  Charlize Theron, who does not paint a very sympathetic picture of her character in this. Andy is not very nice but mostly displays a mix of aloofness, and cold-heartedness that makes her seem hard and insensitive to others, Outwardly she appears to be a cynical nihilist who believes in nothing and expects nothing from anyone. However, as the film continues, we find evidence that parts of her makeup seem to contradict all that directly; for example, she displays unadulterated trust towards the rest of her team and a discovery that most of her cynicism is a direct result of past experiences. Andy is the sort of anti-hero role that an aging Charlize Theron has been taking lately. Territory that has until recently other actresses have claimed and established as their own. The immortality in its narrative, along with the plot twist towards the end of the film, combined with excellent acting and top-notch production quality, save this film from being an entirely generic actioner and make it worth watching. The film could not resist setting up a possible sequel in its final moments, which is on the way.