The adventures of Dunk and Egg are a series of novellas written by George R.R. Martin and set within the same world of Game of Thrones. The 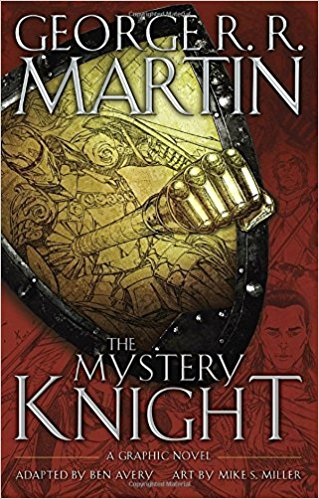 Mystery Knight is the third story to be adapted into graphic novel format by Ben Avery and artist Mike S. Miller. They follow the adventures of “Dunk” (the future Lord Commander of the Kingsguard, Ser Duncan the Tall) and his squire “Egg” (the future King Aegon V Targaryen), some 90 years before the events of the novels. Aegon V Targaryen is the grandfather of Aerys II, the Mad King, and great grandfather of Daenerys Targaryen.

As compared to the densely plotted, heavy drama of the novels, the Dunk and Egg series tends to be more lighthearted and fun, basically  the adventures of a couple of buddies. The young prince travels incognito, head shaven clean to hide the trademark pale locks of the Targaryens. The two are on their way to Winterfell to join the service of Lord Beron Stark in his campaign against the Greyjoys.

Along the way they encounter a group of other minor knights who are travelling to a jousting tournament taking place at the wedding of Lord Butterwell of Whitewalls to a Frey daughter. The prize in the tournament is a rare dragon’s egg! While Duncan is not proficient in the joust, he is hoping to finish high enough to get the pair some much needed coin. Egg, on the other hand, is concerned that many of the tournament’s participants had also fought against his brother, King Daeron II Targaryen, in the infamous Blackfyre Rebellion. What starts out as a tale of action and revelry turns into a mystery when it is discovered that the prized dragon egg has been stolen. Suspicion falls upon Ser Glendon Ball, a brash knight who claims to be the bastard son of the famous knight Quentyn “Fireball” Ball, who fought for Daemon Blackfyre in the failed rebellion. Dunk and Egg find themselves caught up in court intrigue that leads all the way to Kings Landing complete with rebels, spies, and valorous knights on both sides. 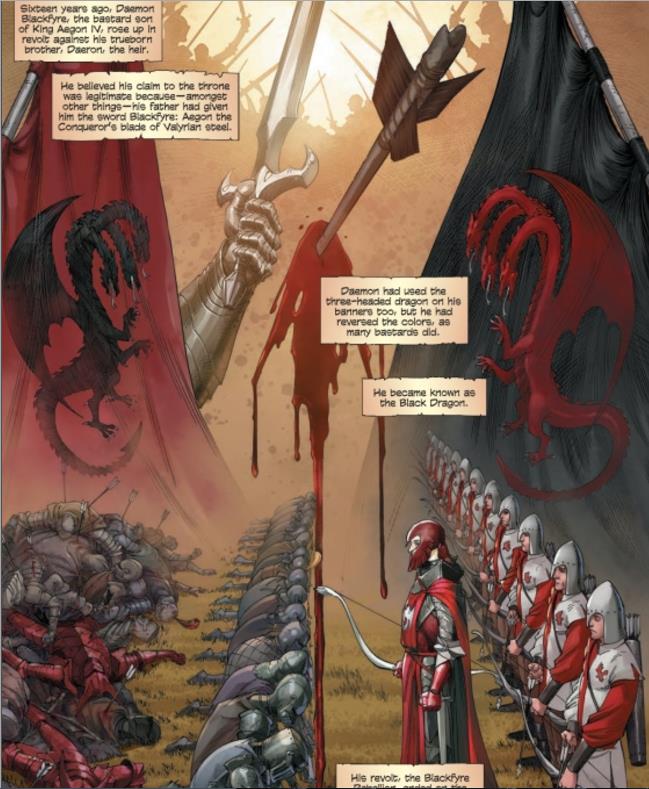 the Seven Kingdoms leading up to the murder of the Mad King and the reign of King Robert Baratheon, which is where Game of Thrones begins. As with the novels there are a lot of characters including a wide array of knights, Lords and Ladies but it never bogs down the action which includes a fair amount of swordplay and jousting.

Mike S. Miller, who has worked for Marvel, DC, and Image, has been doing the Dunk and Egg series since it first began its adaptation into comics format and is simply superb. In an era where it seems like at least 50% of the art is minimalist dreck that never would have seen print 20 or 30 years ago, Miller’s work beams with vibrant depth and detail, bringing these characters, both major and minor, to life right before your eyes. While The Mystery Knight is the last of the Dunk and Egg stories, Martin does have two more tentatively planned, “The She-Wolves of Winterfell”, and “The Village Hero”. Of course, any Game of Thrones fan knows how that goes when it comes to George R.R. Martin. We will believe it when we see it!