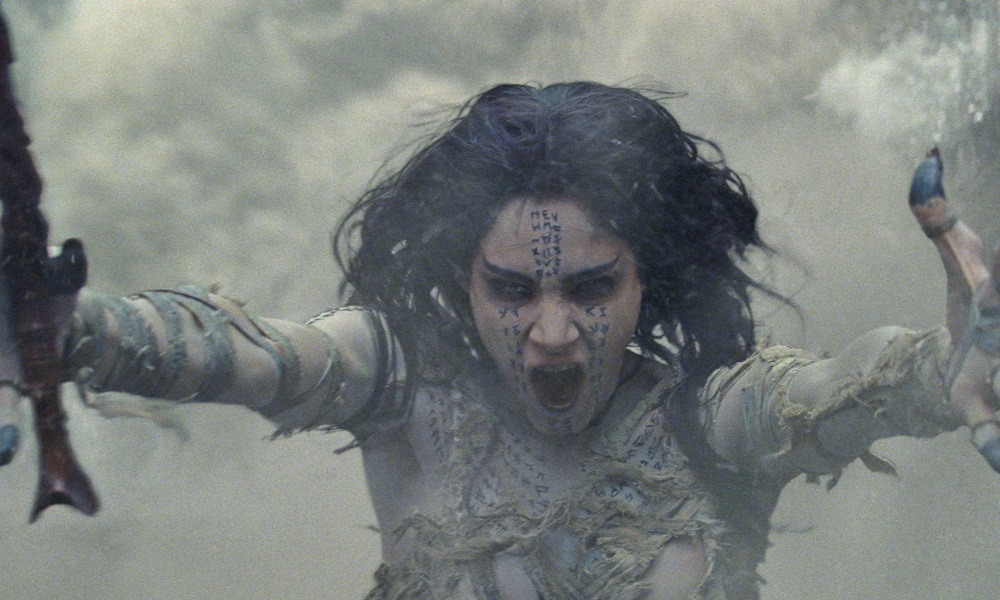 I’ll be honest: for the first hour of The Mummy, I thought they had a real winner on their hands. Not that it presents a real heir apparent to the previous entries in cinema’s bandage-wrapped brigade, but it holds a ton of B-movie pleasures and seems dedicated to doing its own thing instead of just following the playbook of earlier films. It generates reasonable scares, but in a fun way, and its premise shows enough promise to make the notion of a whole new “Dark Universe” kind of appealing.

Then they ruin it the same way every other would-be franchise starter ruins it: cramming in too much for the sake of the larger project, instead of letting this first one take the stage and breathe. That doesn’t entirely undo the more interesting elements on display, but it certainly renders their pleasures a lot harder to enjoy.

Let’s start with the good stuff, and at the top of that list stands Sofia Boutella as this film’s version of the immortal undead. The actress has parleyed her background as a dancer into some eminently tasty movie roles (she was the blade-legged henchgirl in Kingsman and Noted Alien Chick Jaylah in the last Star Trek movie), and this part may be her best yet. As Ahmanet, evil Egyptian queen-to-be denied true power by the birth of a younger brother and calling down the forces of darkness to even the score, she instills seductive menace into a role that hinges almost entirely on body language. You can’t have a mummy movie without a good mummy, and while this movie has a large number of problems, the title character isn’t one of them.

Nor is star Tom Cruise, who overcomes the lingering “why the hell am I here” notion by playing a shifty weasel instead of a traditional leading man. People tend to think of Cruise as a go-to onscreen hero, which often obfuscates the simple fact that he’s very, very good at playing twerps. His amoral army scout accidentally unearths Ahmanet’s tomb in the desert, setting the story in motion and painting a target on his back for the usual rule-the-universe-from-beyond-the-grave plot that Ahmanet really wants him to be a part of. Together, the two display a delightful chemistry that evokes the Lestat sequel that never was: ancient evil seeking modern weakness and possibly dooming humanity in the process.

To that, The Mummy adds a fistful of rich pulpy horror: the kind that plays well on lazy Saturday afternoons and which we expect from summer entertainment that the Dark Universe is promising. Hapless victims transformed into lurching minions, murdered buddies hanging out in English bathrooms and uttering prophesies of doom, sinister ravens cawing gleefully from English tombstones… if Universal is serious about resurrecting its beloved monsters, it’s going to need that kind of material to work, and while it won’t make anyone forget Boris Karloff (or Christopher Lee or Arnold Vosloo, whose 1999 Mummy has held up impressively well), the set-up proves appreciably entertaining provided we don’t ask for the moon.

Then, as these projects so often do, it remembers the bigger picture… and the whole thing falls apart.

It starts with the ham-handed inclusion of a secret monster-hunting society intended to tie the Dark Universe together: a clumsy and not especially well-developed notion that struggles for traction from the beginning. It’s led by Dr. Henry Jekyll (Russell Crowe) who, as you may suspect, harbors a dark secret. Said secret doesn’t belong in this film, but The Mummy’s insistence on indulging it sends the whole thing careening into a wall. Even if it hadn’t, Crowe is the wrong actor to play meek and unassuming, as he does with Jekyll, and the secret organization around him feels like it was thrown together about a minute-and-a-half before the shoot started.

That forms a lodestone around the movie’s second and third act from which it never recovers. Director Alex Kurtzman tries to get back on track by delving into the idea of the monster within, but the film has done little before then to support the seriousness of the concept, and it smacks of focus-group meddling for a project that demands clarity of vision.

That may be the most depressing thing about The Mummy: the lack of a stronger premise to rally around. Universal’s superhero envy is palpable, and their urge to spin a viable new franchise out of their most stalwart property shows merit. I confess I’m very curious to see Javier Bardhem play Frankenstein’s monster, and nothing in The Mummy has convinced me that the Dark Universe can’t recover. But the studio’s original horror cycle was very much a product of its time, and resurrecting it for the 21st century means more than throwing some big names at the screen. They needed something powerful at the center of this endeavor, and while that may eventually arrive, we don’t see it here.

The Mummy ultimately becomes too ambitious to enjoy and too muddled to impress, joining the likes of Van Helsing and Dracula Untold as depressing also-rans rather than the trendsetter the filmmakers are hoping for. Joe Johnston’s troubled Wolfman reboot from 2010 actually came the closest to the vibe they’re trying for here, a vibe that can’t sing without a lot more breathing room than anxious executives are willing to provide. Better luck next time guys. The lurching undead may be necessary for this property, but the movie itself resembles them in all the wrong ways.