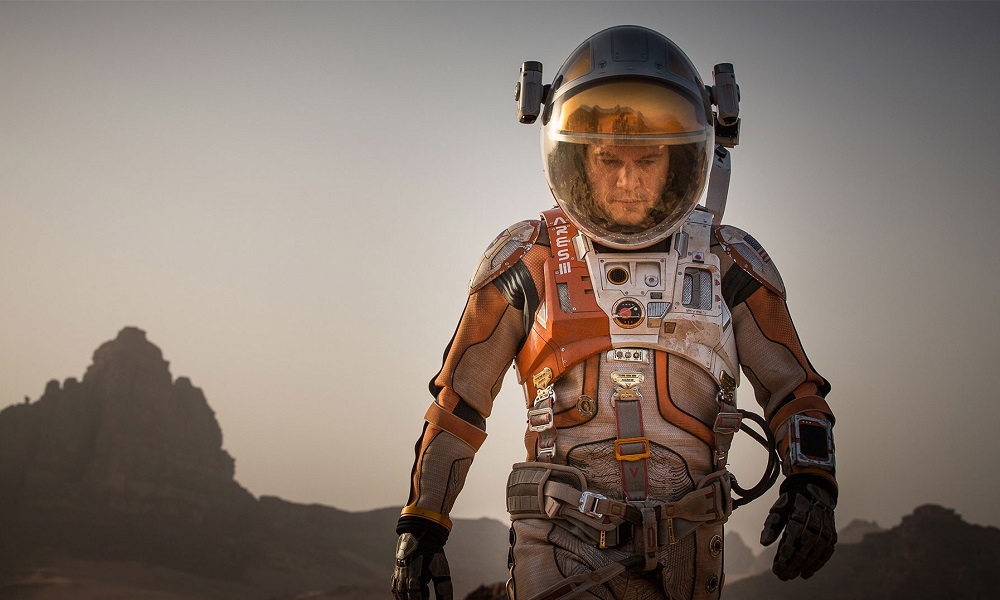 The sign of a great director – which Ridley Scott most assuredly is, despite his share of stumbles along the way – is an ability to reimagine a similar scenario in very different ways. Like the original Alien, The Martian delivers a claustrophobic thriller set in the confines of outer space. 35 years on, Scott still has the right instincts for this kind of material, and in Andy Weir’s source novel finds a way of repeating Alien’s trick in a way that is precisely, exactly un-Alien like. If it doesn’t reach the level of Scott’s 1979 classic, it certainly gets within shouting distance.

And like other recent astronauts-in-peril stories like Gravity, it stays as simple as possible. After inclement weather on the Red Planet forces NASA to abandon its mission there, botanist Mark Watney (Matt Damon) gets struck by debris and left for dead. He awakens to find himself stranded, with only the team’s shelter and a distressingly limited amount of food and water to survive until (and unless) someone notices that he’s still alive.

The Robinson Crusoe set-up suits Scott’s sensibilities well. He relishes all the little details about how Watney thinks his way out of various binds again and again while the scientists back on Earth have to figure out how to get to him before he starves. Damon does quite well on his own as an interplanetary castaway, with the brashness and self-confidence of a born movie star who can hold the screen solely on pure unfiltered charisma. In contrast, the Earth-bound scenes and those of Watney’s former teammates returning home are full of ensemble energy, with stalwarts like Jeff Daniels and Chiwetel Ejiofor ricocheting off of each other to fantastic effect.

Their various dilemmas feel grounded in good science (though I haven’t gone seriously poking at them as of yet), which gives the film the requisite intelligence, and when things go wrong, as they invariably do in stories like this, then Scott’s penchant for unbearable suspense finds new and surprising ways to grip us by the throat. And coming from a director who can succumb to bloat at times – with full justification to do so by nature of the material – its running time at a touch over 130 minutes feels surprisingly tight and extremely well disciplined.

Granted, we’ve had our share of similarly solid sci-fi movies like this one in the recent past. Gravity makes for an obvious influence, and the push towards harder, smarter sci-fi makes it feel less innovative than it should. There’s also a few moments where studio influence comes into play, such as a totally unnecessary subplot concerning the Chinese space agency designed solely to appeal to Hollywood’s new favorite overseas market. Spots like these put a little tarnish on The Martian’s otherwise respectable surface, and hold it back when it should be surging forward.

That said, it’s still a tremendous entry in a growing field of solid post-millennial science fiction, delivered by a director who rebounds sharply after the crushing disappointment of his Exodus adaptation. He maintains the plausibility of its near-future imagining and reminds us once again just how many horrifying ways there are to die in outer space. And yet it never succumbs to nihilism or despair. We live in tragic times, when our species-wide inability to accomplish anything of substance is rubbed in our faces on a daily basis. The Martian reminds us that we are also capable of great things when we put our minds to it: something as simple as going to pick someone up and as amazing as traversing the distance between two planets to do so. We need more reminders like this of what we can accomplish: not as superheroes or messiahs, but just people occasionally dealt a really bum hand and somehow finding ways to take the whole pot with it. For all its grim overtones, The Martian is surprisingly optimistic, a feature that cements its status as one of the best genre films in recent years.

2 thought on “The Martian – Movie Review”