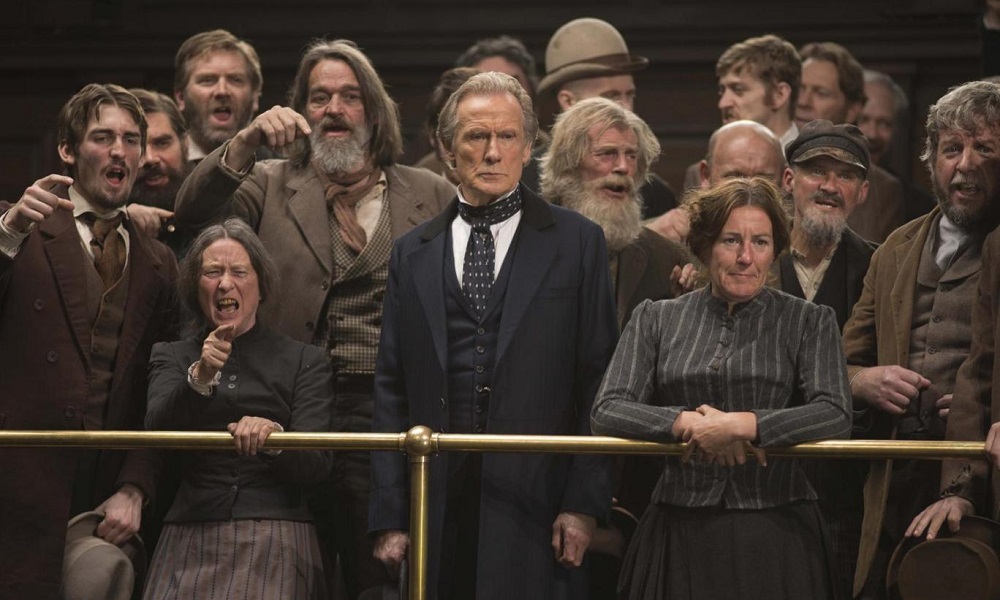 Old-fashioned horror movies have a way of hanging in there, cropping up again with tales of haunted houses and creepy dolls just when the hot trend du jour has begun to fade. The Limehouse Golem sticks close to those older traditions: less a terrifying spook show than a slow-burn Gothic murder mystery. It’s a handsome, polished production, using the more gruesome elements with a sure and steady hand while keeping our focus on the meatier material beneath the surface. You get the impression that you’ve seen this kind of movie before, but if you accept that it won’t break any new boundaries, the confidence with which it goes about its task is impressive.

The Limehouse Golem itself is a serial killer, stalking the streets of London several years before Jack the Ripper. Once again, a weary inspector (Bill Nighy) is tasked to hunt the murderer down. His path leads him to the theater district, and specifically to a young former actress (Olivia Cooke) turned bourgeois housewife who now sits accused of poisoning her husband.

The routine nature of the scenario is punched up by the details, and specifically by Cooke’s character who makes a supremely appealing Victorian heroine. The Limehouse Golem hangs a great deal of its drama on her various struggles: first to succeed as an actress when the profession was considered one step up from prostitution, then to shed the stigma and take on a respectable life. It’s a terrific fulcrum for exploring notions of sexism, anti-Semitism and a host of other social ills, barely disguised by polite society and springing into the open at the drop of a hat.

Director Juan Carlos Medina paints a fine shadowy London to send his characters scampering through, along with sufficient twists and turns to the mystery itself to keep us guessing. It veers into gimmickry sometimes (Karl Marx shows up at one point; it’s never a good sign when period figures make a token appearance), but The Limehouse Golem wisely keeps such distractions to a minimum.

Credit for the film’s strong foundation lies with screenwriter Jane Goldman, whose work includes Kick-Ass, the two Kingsman movies, a pair of the better X-Men films and the similar period piece The Woman in Black. She tackles the source novel by Peter Ackroyd with a great deal of confidence, finding fascinating new details in a time and place that had been thoroughly mined of them. As a result, The Limehouse Golem injects new life into the Gothic clichés that might have claimed it, turning familiar trends into something new and interesting.

The casting helps too, starting with Nighy whose take on the bone-tired investigator carries some fresh energy that further separates the production from the clichés that might have claimed it. Cooke, for her part, tackles a complicated and potentially messy part with a great deal of confidence, and finds a unified character in a disparate series of emotions and moods. We’re on her side from the beginning – a woman struggling to survive in a world eager to condemn her out of hand – and as Nighy’s inspector comes sniffing around, the film engenders a great deal of interest simply watching the two negotiate a quiet alliance. The Limehouse Golem shuttles back and forth in time a great deal, but Medina stays focused on the pair at all times, which keeps the events clear and the stakes in sharp focus.

The Limehouse Golem suffers in part from bad timing, released on the same day as It and simply unable to compete with the anticipated box office returns that its competitor will engender. But as an alternative to its higher-profile competition, it demonstrates the richness and diversity that horror can produce, and as a stand-alone movie, it deserves to find an audience that can appreciate its throwback atmosphere. Hopefully, its VOD platform will let it flourish in ways a theatrical release wouldn’t, and canny horror fans will be well rewarded for seeking it out.