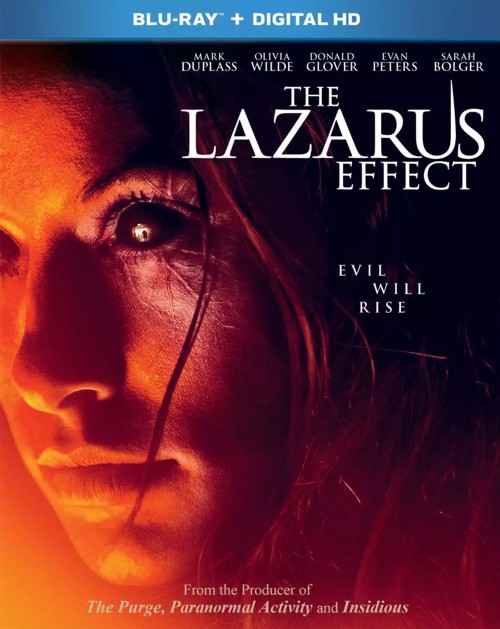 If I had to pick a quick and easy way to describe The Lazarus Effect it would be Frankenstein meets Pet Sematary…but just not as good.  A university research team consisting of doctors Frank Walton (Duplass) and Zoe McConnell (Wilde), along with technicians Niko (Glover), Clay (Peters) and developed a serum, code-named “Lazarus”.  It was intended to assist coma patients regain consciousness but is shown to actually be able to bring the dead back to life. They hire a videographer, Ava, to record their experiments.

The team runs a test on a recently deceased dog and successfully brings it back to life.  However, it soon becomes clear that the dog isn’t behaving normally.  An MRI on the dog shows that the Lazarus serum hasn’t dissipated in the dog’s brain and instead is creating new synapses.  The Dean of the University discovers their experiments and shuts them down and a large pharmaceutical company comes in and confiscates all of their data.

They sneak into the lab to duplicate the experience but things go very wrong as Zoe is electrocuted.  Against the protests of the rest of the team, Frank uses the last of the serum on her to restore her to life.  At first she appears normal as did the dog.  But Zoe is far from normal.  She claims that when she died she went to her own personal version of hell.  Even worse, she seems to have brought back a piece of hell with her as well as developing an array of terrifying psychic powers.  The rest of the team finds themselves trapped in the lab with whatever Zoe has become and she doesn’t intend to let them leave alive.

While The Lazarus Effect has an attractive and likable cast, they are burdened with an unoriginal and often silly story.  The plot points of bringing first the pet and then the human back to life are straight out of Pet Sematary but with a Doctor Frankenstein-style slant with all manner of electric gizmos and machines zapping and sparking.

I still can’t call foul on the film up until this point as my curiosity was still piqued.  But once Zoe is brought back to life the film crumbles into a confusing mess.  What exactly Zoe has become is never fully explained.  Is she possessed?  Is she in reality still trapped in hell?  Did the chemicals she was given cause the change in her personality?  Your guess is as good as mine.

At a mere 83 minutes the film feels padded as Zoe’s powers are so incredibly potent there should have been no way for the group to survive even a few minutes.  It also made little sense in their returning to the lab in the first place to try and revive another dog.  Their data had been taken.  They were not going to have access to their equipment, and they still HAD the first dog they brought back to life so what was the point?  Having the University halt the project and sell off the contents was a weak contrivance to further the action.

The film gets a minor uptick due to the fact that the always wonderful and quirky Ray Wise makes an appearance as the head of the pharmaceutical that took over the lab.  Love the cast but hate the story.